It may sound strange to say, but I found myself doing a little bargain shopping Wednesday.

While the market is only down 2% to 3% with the Nasdaq barely off all-time highs, we often get caught watching the index numbers and not the individual stock numbers. There are some stocks down 15% to 20% from Tuesday's highs. Those are the names I'm willing to consider here.

When we get a nasty selloff, and really this one isn't all that nasty, we'll see everything move together.

My focus is on two things:

1. Watch for names in green. They might have a story or catalyst that will propel them even higher if the market turns.

2. Watch for quality names that are dropping significantly more than similar stocks in the same space.

Honestly, I don't care if it is a long-term position or not. The overall market setup isn't the greatest here, so why not give yourself a little breathing room?

Speaking of market setups, the island top (blue box) on the daily chart of the SPDR S&P 500 ETF (SPY)  isn't a great look. The price action has also formed a megaphone pattern, which is also bearish. Add in the fact that SPY has dropped below the 8-day simple moving average (SMA) and 21-day SMA with the 8-day SMA threatening to drop underneath the 21-day SMA today as well. That mounting bearish price action gives me pause. 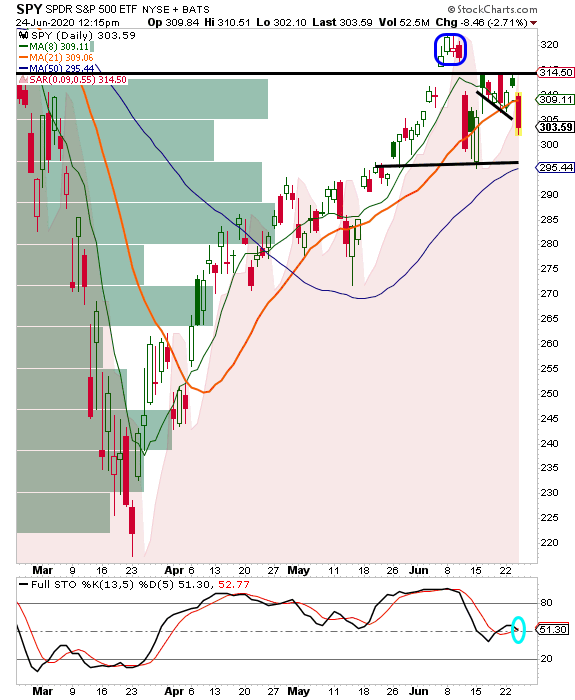 Moving to secondary indicators, the parabolic stop-and-reverse indicator flipped bearish today. The last time it happened was right before the big drop in early June. Also, the Full Stochastics bounce is failing and setting to cross bearish while moving under 50.

This leads to the conclusion that if SPY fails to close above $305 for two out of the next three days with the outlier being very close to $305, I believe it'll head for a test of $295 with a slight pause at $300. This isn't a huge drop, but expect some highflyers to get clipped in the 7.5% to 10% range in addition to Wednesday's drop if that happens.

There is a rebalance coming Friday with the Russell 3000 plus the end of the month and end of the second quarter. After the strong run, our bias should be higher as fund managers don't want to appear as though they missed the big bounce. That being said, we're shaping up for a bumpy start to the month of July if we don't see it the next few days.

It is probably time to take your foot off the gas until we are back over $315 on the SPY.

Get an email alert each time I write an article for Real Money. Click the "+Follow" next to my byline to this article.
TAGS: ETFs | Indexes | Investing | Markets | Stocks | Trading