You see how this works? I go on vacation and you guys allow the market to correct as soon as I step off the desk. The same thing happened in June. I'm starting to get paranoid!

Take the chart of the S&P. That uptrend line that has been in place since May is still intact. It tried to snap it, but at least for now it's a false break. I'm not sure that will continue, but last week's decline didn't do it.

We can look at the chart of the Invesco QQQ (QQQ) , too, since that textbook type channel they have been in remains intact for now. When I left, midweek last week, the QQQs were kissing the top of the channel and by Friday they had tagged the lower line. Again, they bent but they did not break.

You can go through all those high fliers and see almost every one of them bounced off their uptrend lines. It's the lesser -- or secondary -- high fliers that didn't. Remember the deterioration starts with the troops not the generals. The generals are the last to go.

When it comes to the indicators there was not much new. Nasdaq's new lows continue to expand. In fact, Thursday and Friday Nasdaq saw more new lows than new highs. That is not something healthy markets do. The 20-day moving average of Nasdaq's new lows is now higher than it was in May.

The McClellan Summation Indexes are making lower lows. The best news I can offer there is that Friday's New York Stock Exchange breadth wasn't nearly as bad as it could have been relative to the decline in the S&P. That means that the Summation Index will need a net differential of positive 2,400 advancers minus decliners to halt the decline, which makes it a little bit oversold.

By late June, my Saturday Twitter Poll, in which I ask folks what they think the next 100 points in the S&P will be, was well over 60% on the downside.

I'll call this split.
Thanks again for all who participated. I couldn't do it without you! pic.twitter.com/PYsdLRq68Z

This past weekend, it was split at 50-50. Does that sound like bearishness to you?

I will conclude with the chart of the Investor's Intelligence bulls, which tagged 61.5% last week. We'll get a new reading midweek this week, which will encompass last week's decline, but readings over 60% are red flags for me, and while I expect we'll see this back off from 61.5%, I don't expect we'll see it fall enough for us to say much more than the air has come out of the complacency, but it's not as though folks are bearish. 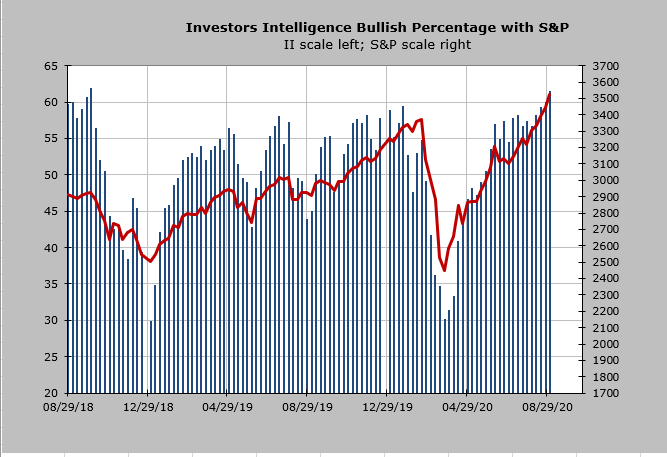 As for the oversold/overbought readings, they are below: