Stocks finished Tuesday session mixed, with the iShares Russell 2000 ETF (IWM) and Invesco QQQ Trust (QQQ) losing less than 0.25% and the SPDR S&P 500 ETF (SPY) gaining about 0.25%. Retail stocks performed great, thanks partly to Home Depot (HD) and Walmart (WMT) . But it's also worth noting the surge of buying we saw in shares of AutoNation (AN) , Sonic Automotive (SAH) and Penske Automotive (PAG) , along with strong performance in some of the department store stocks. The bottom line is Tuesday's buying wasn't in the tech space; rather, it was heavily concentrated in retail-related stocks.

Many traders I chat with recently have backed away from a bullish bias. Some are beginning to sell short, but as I've said on several occasions, anticipating tops isn't a strategy I typically rely on. Based on the number of attractive short setups I'm finding, I'm inclined to expect one more burst of buying to inflict maximum pain on traders before a more prolonged decline sets in.

Nonetheless, if you're stalking a turn in the market or are already short, make sure you've identified your risk and where you'll exit a short position. As much as I and others believe a turn lower is in the cards over the next few weeks, getting caught in a short squeeze without an escape plan is an even worse feeling that getting hit with fear of missing out on the way up.

Speaking of selling short, I've seen a few traders reference the 200-day simple moving average (SMA) and suggest that a single close above that moving average will signify a significant turn in the market and prove that major institutions are going all-in on stocks. In my experience, moving averages are best used as guides in determining which way price is trying to auction. Treating any moving average, even the 21-day exponential moving average (EMA), which I rely heavily on, as a holy grail trend indicator is rarely a good idea. If you need proof of this, look at the chart below at how the SPY traded around the 200-day SMA in late January and early February and again in late March and early April. 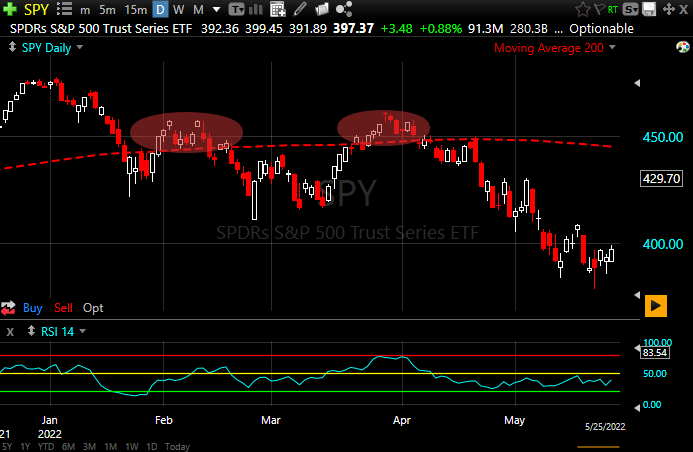 Moving averages are reference points, nothing more. Put another way, while an EMA or SMA can serve as a tool to measure risk against, there are always other factors worth considering, such as volume and price patterns.

Get an email alert each time I write an article for Real Money. Click the "+Follow" next to my byline to this article.
TAGS: Short-selling | Earnings | ETFs | Index Funds | Investing | Stocks | Technical Analysis | Trading | Retail | Real Money