It's no secret that traders were poorly positioned for the rally these past couple weeks. But there are two sides to this argument. If you missed the rally over the past 10 days or were under-invested but you followed your investing rules and avoided the bulk of the bear market, you're doing just fine. Conversely, if you caught the rally but have been crushed trying to pick a bottom in the market since late January, this is a great time to take a step back and rethink your process.

Looking at the Invesco QQQ Trust (QQQ) , fear of missing out got the better of traders at Thursday's open as QQQ opened on top of its year-to-date volume-weighted average price (VWAP) and tested the $330 resistance line I talked about Thursday during the first hour of trading. 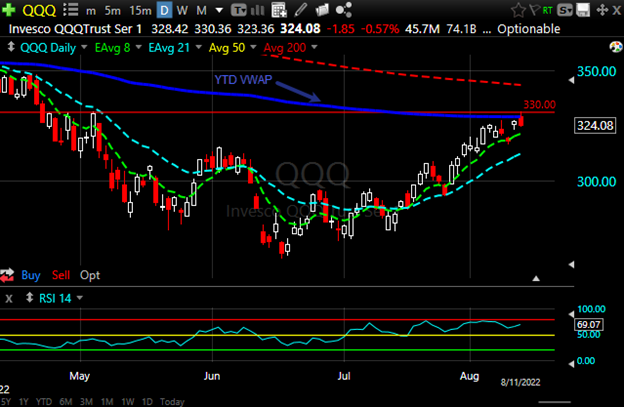 While I was a seller into $330, it's important to note that until QQQ breaks back under the 21-day exponential moving average (EMA) and the Relative Strength Index (RSI) dips beneath 50, dip buyers will likely remain active. My focus will shift back to day trading and scalping until QQQ consolidates its month-long rally. Still, as always, I'll be on the hunt for another swing trading opportunity provided QQQ holds above its 21-day EMA and 50-day simple moving average (SMA).

As far as areas I've got marked for potential dip buying zones, the two primary areas I'm watching are the 21-day EMA and early June support near $311-$312, and the 50-day SMA in conjunction with the VWAP anchored to the June 16 low between $298 and $296. Both areas are marked on the chart below. 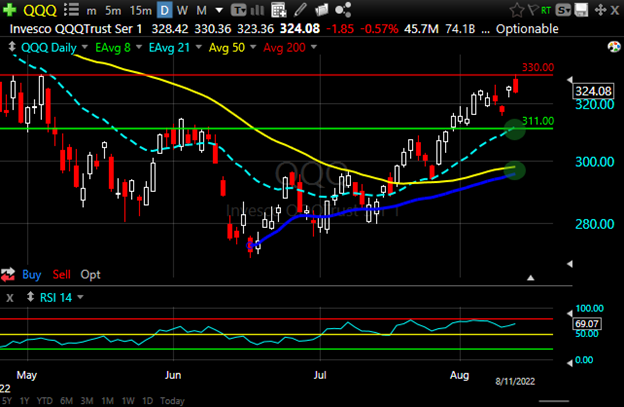 The quicker we test the 21-day EMA, the less likely I believe it will hold. Ideally, dip buyers would like to see any forthcoming dip unfold in a dull and mild manner.

Get an email alert each time I write an article for Real Money. Click the "+Follow" next to my byline to this article.
TAGS: ETFs | Index Funds | Investing | Stocks | Technical Analysis | Trading | Real Money