On the surface it appears that Intel (INTC) is at least moving in the right direction. That said, the load is heavy, and the path is strewn with debris. Let's discuss. In late January, Intel, a name I vaguely remember as a long ago Sarge fave, reported the firm's fourth quarter financial performance. The firm put an adjusted EPS print of $1.09 to the tape on revenue of $19.53B. Both numbers beat Wall Street, despite the fact that sales had only grown 4% year over year. All good? All not so good.

Oh, there was something to get positive about. The Data Center Group experienced revenue growth of 20% to $7.3B. Unfortunately, the firm is still heavily reliant upon the Client Computing Group, which accounted for revenue of $10.1B, a 7% decrease from the year ago period. The firm's smallest business unit, the Internet of Things Group (which includes spin-off candidate Mobileye) saw sales rise 36% to $1.1B. Gross margin fell over 12 months from 56.8% to 53.6%.

The firm had guided for current quarter EPS of $0.80 on revenue of $18.3B. Both top and bottom line guidance came in above Wall Street consensus, but still down year over year. Wall Street appeared unimpressed. Even with a 5% dividend increase. One big problem was the firm's legacy reliance on Client Computing, on PC's (personal computers) really. I don't think anyone doubts a post-pandemic (hopefully) or even mid-pandemic (worst case) reversion to mean from the dramatic increase in demand as "white collar" America worked from home for two years.

Intel announced just a few days ahead of those earnings, that the firm would invest $20B in a massive new manufacturing facility near Columbus, Ohio. Intel will build out two fabs (fabrication plants) on a 1K acre site, with an option to expand the site to 2K acres, and the number of fabs up to eight. Intel has also announced a $20B foundry building project in Arizona and the plan to build a smaller facility in New Mexico. Investors, if they are to stay investors, must accept that expenses are going to be high, and margin along with earnings will be pressured. Slowing PC sales are not going to help.

That said, there is a need, and there is a need in the U.S. Leading foundry services provider Taiwan Semiconductor (TSM) has been growing earnings in the high teens, percentage wise on revenue growing more than 20% and has had trouble keeping up with demand. Global Foundries (GFS) has seen triple figure earnings growth on still rising high double digit sales growth. Both chambers of our legislature have passed separate bills that would free up about $52B to help bring the semiconductor foundry business back on shore. The two bills still have to be ironed out into one bill that can pass into law.

News broke overnight that Intel would be acquiring Tower Semiconductor (TSEM) for $53 per share ($5.4B) in cash. Tower is an Israeli manufacturer, and Intel intends for Tower to become a fully integrated foundry business within Intel Foundry Services. The deal, once completed, is expected to be immediately accretive to adjusted Intel earnings. This deal has already been approved by the boards of both firms, but due to the regulatory process, as well as the need for approval by Tower shareholders, closing could be almost a year out.

I have spotted three sell-side analysts rated at five stars by TipRanks who have opined on Intel this morning. The difference in opinion is stunning. John Pitzer of Credit Suisse rates Intel a "buy" with a $70 price target. Timothy Arcuri of Credit Suisse maintains his "hold" on the name with a $53 target price. Lastly, Vivek Arya of BAC makes Intel an outright "sell" with no target price and stressed that notebook deliveries fell drastically in January.

Intel is spending a ton of dough, and is probably going someplace that we wish an American company would have gone a few years ago. The Tower deal is a year away from completion. The new foundries in Arizona and Ohio are at least a couple of years away. Meanwhile, the firm's bread and butter business is in decline, and the firm places behind its key competitors for the high businesses of 2022.

The firm did end the fourth quarter with a decent enough balance sheet. The firm's current ratio stands above two. That said, free cash flow was negative for the fourth quarter and the firm raised their dividend (now yielding 3%) which I don't love. In addition, though they can service the debt, long-term debt was "down" to $33.5B, while the net cash position is down to $28.4B.

Intel is here to stay, but the firm is a long way from competing effectively against either Nvidia (NVDA) or Advanced Micro Devices (AMD) for the market's sweet spot, or competing with Taiwan Semiconductor and becoming America's foundry. The day will come. You have time. 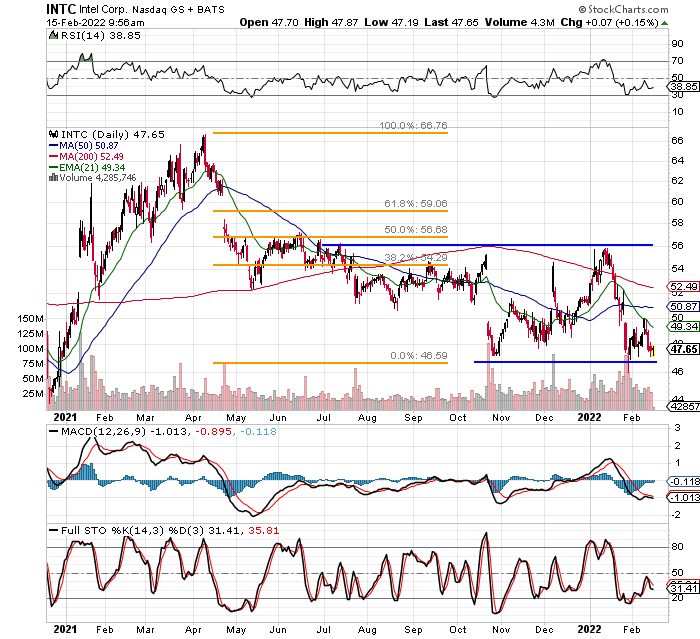 Technically, Intel shares are trading close to the bottom of a four month base ranging from $46 to $56. Relative Strength, The Full Stochastics Oscillator, and the daily MACD offer the investor no solace. To get back to the top of that range the stock would have to saw through its 21 day EMA, 50 day SMA, and 200 day SMA.

Intel is set to report again in late April. If I were long the shares, which I am not, I would probably grab some $47.50 May puts for about $3.50, and sell a like number of May $40 puts for roughly $1.10 in order to reduce the expense. In fact, I may try that without an underlying equity position.

(NVDA and AMD are holdings in the Action Alerts PLUS member club. Want to be alerted before AAP buys or sells these stocks? Learn more now.)

Rising interest rates, inflation and market volatility are on the horizon. You don't want to miss out on this exclusive opportunity to unlock Action Alerts PLUS at our lowest price of the year.

Market volatility is on the rise. Unlock Real Money at our lowest price of the year and let our Wall Street experts do your investing homework for you.