On Monday, when the market rallied, so few even considered that the market was heading to an overbought reading.

The sentiment was "just be bullish." But now, we have had two-straight days where the market milled around or worse, opened higher and closed lower.

Now, I know none of this was by any size, meaning the selloff wasn't sizeable. But when you look around, you see that it was pot stocks that were on fire and very little else and you see folks noting how overbought we are. Now, after two days of going nowhere, you have the put/call ratio at .76, which isn't high, but is the highest in a week. So you can sense there was a change -- an ever so minor change -- in the market participants on Wednesday from just two days ago.

And that is ultimately bullish. Remember, so few were bullish 10 days ago as we headed into February and last weekend everyone seemed to be back on board the train. So, if they get off the train quickly, we should get another good set up for a rally.

Yes, we are overbought. This is not news to you. I have flagged the latter part of this week as the point the market gets back to an overbought reading and here we are. I even think we could rally a bit more before the week is out. But ultimately that overbought reading takes hold and the market should correct. I have had my eyes on next week for that to happen, but we're into the overbought neighborhood now.

Let me go back to the put/call ratio situation, because I had promised to alert you when the 21-day moving average for the exchange-traded fund put/call ratio peaks. It hasn't done so, yet. But look how high it is now. You can imagine that if we correct next week, it is possible this will shoot higher, and higher readings in this lead to good lows in the market. Just take a look at the two peaks in September and October (boxed in green). 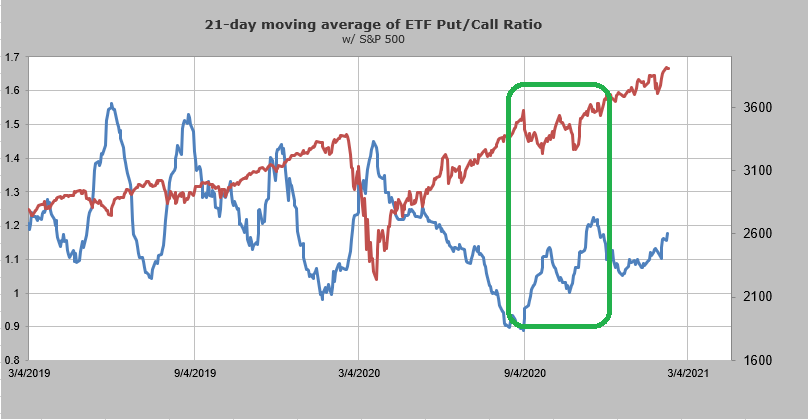 I'll even note that the Investors Intelligence bulls barely ticked up this week, so they are still under 60% now. But look at the bears. They moved up to 18.3% the highest since the fall. They got to 23% in the fall decline. So if we did correct next week, it's not hard to imagine that we could see this move up, is it? 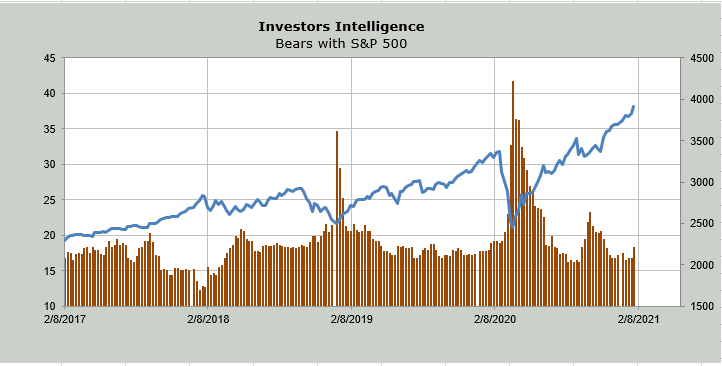 Having just had a decline and having had some big swings down and then back up in the market, it's not going to be hard for new found bulls to turn cautious quickly. That's what I will be looking for, especially if we get that overbought pullback next week.