The market was a meme factory on Wednesday.

That means there is an awful lot of speculation out there. Approximately 25% of the volume on the New York Stocks Exchange was in four of the four main meme stocks: AMC (AMC) , BlackBerry (BB) , Bed Bath & Beyond (BBBY) and Nokia (NOK) . Many want to dismiss this, because it is already summer trading. As always, I prefer not to rationalize an indicator. Having 25% in four stocks is quite a bit, especially when they are all highly speculative.

There is a statistic I would like to cover with you. It is the put/call ratio for exchange-traded funds. On Tuesday, it clocked in at .63, which is awfully low. I went back to see if readings under .70 were frequent, and it turns out they are not. Since late 2015 it has happened only 13 times. Eight of those times it resulted in a correction of at least 5%.

The year 2016 had the most instances. You can see the black arrows on the chart. The red circled one saw a one percent pullback and that was it and the reading in July of 2016 sent the market into a few months of nothingness until October (not shown on the chart) where we did correct just prior to the election.

2017 was the year nothing mattered, including this. Unless you want to count the fact that three weeks later we saw a 3% correction.

In the spring of 2019 we had one last spurt upward and then, down we went.

In October 2019 we saw another instance that didn't matter but in early 2020 it mattered and then some.

Finally we have the last year. In late August 2020 you can see it mattered and then about six weeks ago in late April it mattered (although the S&P did not correct 5%, it was closer to 3%).

I prefer to see breadth weaken before getting too concerned. It was not terrific on Wednesday, but it has been good for a few weeks. Thus it bears watching for now. The number of stocks making new highs tailed off a bit on Wednesday vs. Tuesday, so that too needs to be watched.

Sentiment shows the Investors Intelligence bulls gained two points to 53.5%, so we'll call that neutral now. The 10-day moving average of the put/call ratio is falling, but is not yet extreme. I expect in the next three to five days this will be lower and begin to curl back up. In addition, the ETF put/call ratio's 21-day moving average is not yet back at the low levels we saw a month ago. That is all possible now in the next several days. 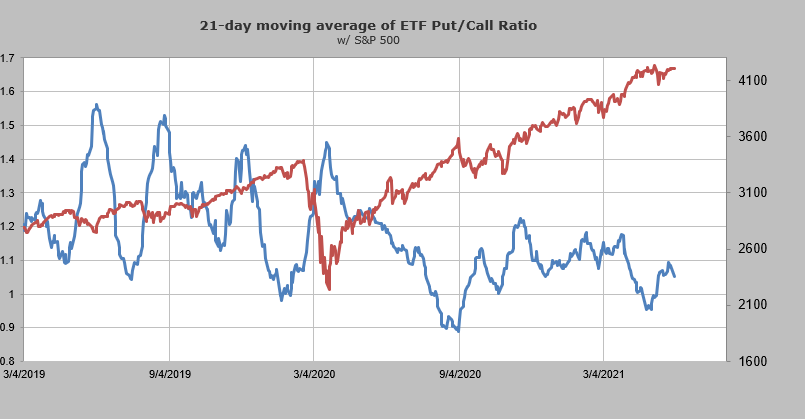 At this point, I think the low put/call ratio for exchange-traded funds will be problematic if those other indicators start to confirm. That's what I'll be on the look out for in the coming days.

Note: There will be no Top Stocks column Friday. The next column one is Monday.