There's opportunity in the hybrid cloud enterprise space. If IBM (IBM) is truly championing that area as its turnaround, I'm cautiously optimistic.

There's no upside to fighting Amazon (AMZN) , Alphabet (GOOGL) , and Microsoft (MSFT) as cloud providers. IBM has too much legacy, too much weight, to do so. It's not as nimble on the innovation front and with the huge $34 billion acquisition of Red Hat (RHT) I see it as pot-committed to the hybrid side of the equation.

The good news is this is a space where IBM can compete, even using its name. Furthermore, there are much smaller names in the space it can acquire at a reasonable cost to maintain strong growth.

With free cash flow of $12 billion expected in 2019 along with earnings per share of $13.90, there may be some opportunity to expand. IBM can leverage the hybrid cloud along with its AI, analytics, and cybersecurity to create a core underpinning that neither Amazon nor Alphabet will likely compete with. There are a number of niche places in each of these categories, but IBM should have the opportunity to hold itself out as the all-in-one hybrid provider over the next several years.

Unfortunately, gone are the days of huge growth and even the servicing business has lulled. Therefore, IBM will continue to trudge as a value play with potential spinoff upside, low expectations, and a big dividend payer. I believe it can fit well into a blended portfolio although I'm likely to take the 5% dividend and buy smaller growth names in the tech space.

In fact, I'm almost of the notion to buy smaller IBM competitors with the thesis either IBM will buy them, a competitor will buy them, or if IBM stumbles, it is because of competition. Think of it as a hedge with upside. I would veer small, though, as big names will be influenced by the overall market and world economies in a similar manner as IBM. The idea is to minimize correlation.

And whether you believe in blockchain or not, IBM will be a player in the space. This may goose the shares a bit should we see a resurgence in crypto or a better understanding of the technology (blockchain, not crypto) in the markets. I wouldn't base any decisions on this, but it's worth noting as something to keep in the back of your mind. 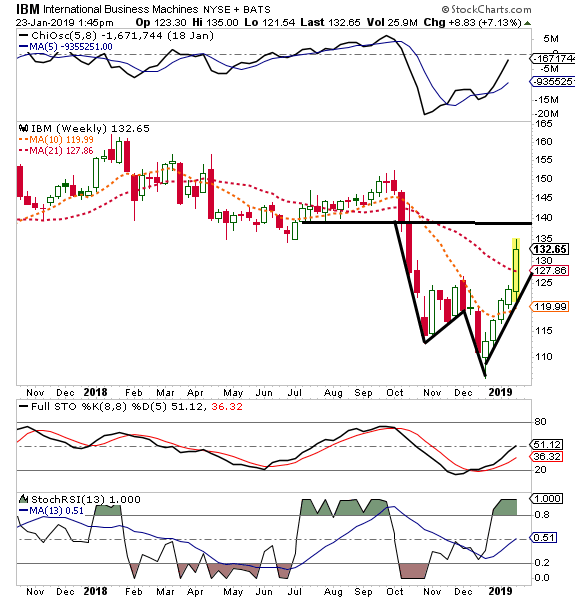 With the stock up by $10 Thursday, IBM is tough to chase, but that doesn't make it a short. Bulls pieced together a somewhat ugly "W" pattern heading into this week (see above), so the push from Wednesday's earnings have triggered a breakout.

IBM will likely hit resistance just below $140, hence the hard chase comment. That being said, strong support should come in via the $125-127 corridor. This is where I would look to dip my toes into IBM.

Should IBM continue to push higher, then I would watch that resistance line around $140. A break above should squeeze another $10 and may be worth a trade. I would be more keen on a rejection below $140 and a pullback to the uptrend.

While I've had my doubts about IBM for a while, I'm beginning to believe in the turnaround story here. One quarter doesn't make it so, but it does warrant attention.

Amazon, Alphabet and Microsoft are holdings in Jim Cramer's Action Alerts PLUS Charitable Trust Portfolio. Want to be alerted before Cramer buys or sells these stocks? Learn more now.

Get an email alert each time I write an article for Real Money. Click the "+Follow" next to my byline to this article.
TAGS: Investing | Stocks | Technical Analysis | Technology | Stock of the Day