Early Thursday morning, IBM  (IBM) announced that it would spin off its Managed Infrastructure Services unit to IBM shareholders in a tax-free deal to be completed by the end of next year. The break-up makes sense, and actually might be a little overdue, to be honest.

IBM has been languishing for years, as sales have stagnated (or worse), and as the firm has been moving toward competing better in the cloud computing space with the likes of Amazon (AMZN) , Microsoft (MSFT) , Alphabet (GOOGL)  and Oracle (ORCL) . Now, the gauntlet has been thrown. Let the games begin.

Simple. IBM's cloud-related revenues increased 30% in the second quarter to $6.3 billion, as the integration of Red Hat has had a positive impact on performance. The Managed Infrastructure Services unit is part of the firm's Global Technologies Services business segment. That segment saw revenues decrease 8% for the second quarter, down to $6.3 billion. Two businesses producing roughly $6.3 billion in revenue, but moving in different directions.

On this spinoff, CEO Arvind Krishna, who by the way, led the Red Hat acquisition, had this to say: "IBM will focus on its open hybrid cloud platform and AI capabilities." Krishna added "NewCo (temporary name) will have greater agility to design, run, and modernize the infrastructure of the world's most important organizations."

Krishna sees IBM focusing "on the $1T hybrid cloud opportunity", with both publicly traded firms ending up "on an improved growth trajectory."

I thought at the time that the Red Hat deal was a bit expensive. I think now, however, that IBM needed to guy growth, to buy opportunity.

The spinoff makes sense, in my opinion at this time, but Thursday's run higher for the shares is a bit premature. Especially when considering that it could take more than a full year to get there.

I would not jump on board the IBM trade Thursday morning. I would, perhaps, try to get a few shares in, at support on a day that the overall market turns negative on information technology broadly, but not IBM specifically for any other reason. Got me? 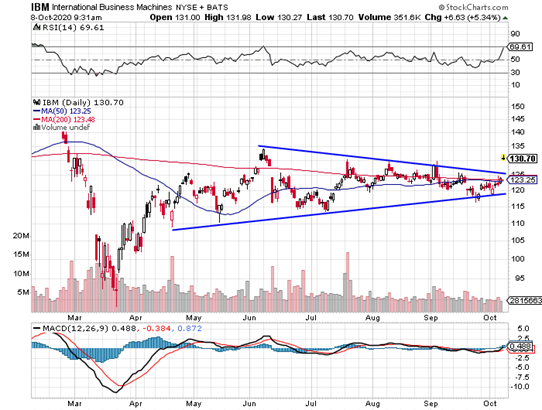 Obviously, IBM shares are trading much higher Thursday morning. The shares have worked their way toward an explosive move through a series of higher lows since April as well as a series of lower highs since late May. This spinoff news has provided the spark for that move.

The positive, technically, would be that the shares are in the process of taking both the 50-day and 200-day simple moving averages in one clean swing.

I think that the shares will come in a bit. If not Thursday, then later this week, or in front of earnings. I don't buy anything above a retest until after the numbers.

Let's say $126-ish for possible entry. Not up here. This company still has something to prove.

(Amazon, Alphabet and Microsoft are holdings in Jim Cramer's Action Alerts PLUS member club. Want to be alerted before Jim Cramer buys or sells these stocks? Learn more now.)

Get an email alert each time I write an article for Real Money. Click the "+Follow" next to my byline to this article.
TAGS: Mergers and Acquisitions | Investing | Markets | Stocks | Trading