By BOB LANG Aug 31, 2020 | 11:30 AM EDT
We must pay attention to volatility -- the VIX -- especially the term structure of the indicator, which is out several months into the future. It gives us a good read as to where big money is getting placed at certain points in time. Clearly, these bets on protection are most often paid off in the short term, as the VIX cash indicator aligns with the future as the clock starts ticking.
Yet, some don't realize the VIX is telling us 30 days of volatility, where the market is most volatile over the next month or so. It's often benign and in a "contango" situation, an upward sloping, left to right. But there is something peculiar about the term structure of the VIX that has us wondering if some big movements to come have been priced in already -- or whether there's an explosion to come.
As you can see from this term structure chart, there is a "kink" in the curve.
That represents the October future, which at that point of expiration is Oct. 21.  Since this projects 30 days' volatility, that would be to around Nov. 20. In between, there is a little thing called an election, and if you recall 2016, before and after the election, we saw some fireworks.
Frankly, most of the action occurred the evening of the election. So, maybe some are preparing for a big night of volatility? That makes some sense, but then these October futures were bought months ago, before the Democratic nominee was discovered.
Think for a moment: Does it really make sense to buy so much volatility out in time, even if you're protecting long portfolio positions, which is what this is likely trying to do? The premiums paid months ago were enormous, and the open interest is still pretty big -- meaning, not many of the contracts have closed. 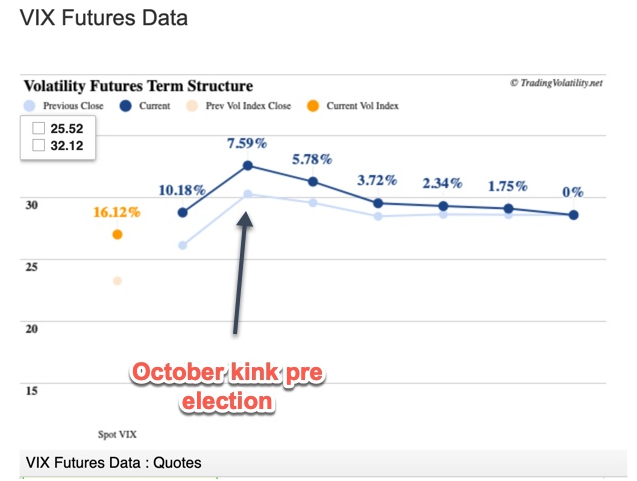 If there is little volatility, however, leading to the election, there could be a very big seller hitting this October future. When the volatility futures drop with the VIX, we often see markets screaming higher.
We really don't know how things will shake out. But we do see where some money is wagered, and that would be on increased volatility and wider ranges. Once the news is out though, there may not be any reason to hold that protection.
Get an email alert each time I write an article for Real Money. Click the "+Follow" next to my byline to this article.
TAGS: Futures | Investing | Stocks | VIX