On Tuesday morning, New Home Sales for April, as compiled by the Census Bureau, badly disappointed the street. All four regions of the US broken out in the report showed declines from March as well as a line of successive monthly declines. Upscale new home builder Toll Brothers (TOL) was set to report its fiscal second-quarter performance on Tuesday evening. This is that story. Let's explore.

For the three-month period ended April 30, Toll Brothers posted GAAP earnings per share of $1.85 on net income of $220.6 million. This was up from $1.01 a share and $127.9 million for the year-ago comparable period. Toll Brothers generated $2.277 billion in revenue, up 18% year over year as itl beat the street on both the top and bottom lines. Cost of home sales as a percentage of revenue dropped from 78.1% a year ago to 75.9% as gross margin for home sales increased conversely from 21.9% to 24.1%.

Toll Brothers delivered 2,407 units for the quarter, up 6% from a year ago. Net signed contract value was up 1% to $3.1 billion as backlog value was up 35% to $11.7 billion. In addition, after repurchasing about 2.2 million shares at an average price of $48.30 a share (spending $106.5 million) this past quarter, Toll Brothers' board refreshed the existing authorization to repurchase up to 20 million shares with no expiration date.

Toll Brothers ended the quarter with a net cash position of $535 million, down from more than $1.6 billion six months ago. This $1 billion-plus change in its cash position shows up in inventories that increased to $8.979 billion, dominating current assets of $9.824 billion (which is in line with six months ago). This measures up well against current liabilities of $2.046 billion for a current ratio of 4.8.

Total assets of $11.544 billion dwarf total liabilities less equity of $6.165 billion. On the surface, this balance sheet gets a passing grade, but on a basic level. Long-term debt (loans payable plus senior notes) amounts to $3.191 billion, which dwarfs Toll Brothers' cash balance uncomfortably, at least to me, given the size of the inventories on hand. However, I am not going to fail this balance sheet based on that debt as I understand commodity prices have been volatile and supplies of commodities as well as labor require an increased build in these times.

I just need the reader to understand that there is risk here. Should the condition of declining new home sales continue as monetary conditions tighten, I think it will become tougher to sell higher-end homes at the prices Toll Brothers guided investors toward. Ex-those inventories, Toll's quick ratio stands at just 0.4. Now obviously the company's inventories are not worth zero, but in such an environment they won't be worth $8.979 billion, either.

Five-star rated (at TipRanks) Rafe Jadrosich of Bank of America is the only sell-side analyst whom I have noticed to opine on Toll since these numbers were released last night. Jadrosich mainited his "buy" rating on the name, but did reduce his target price from $63 to $56. 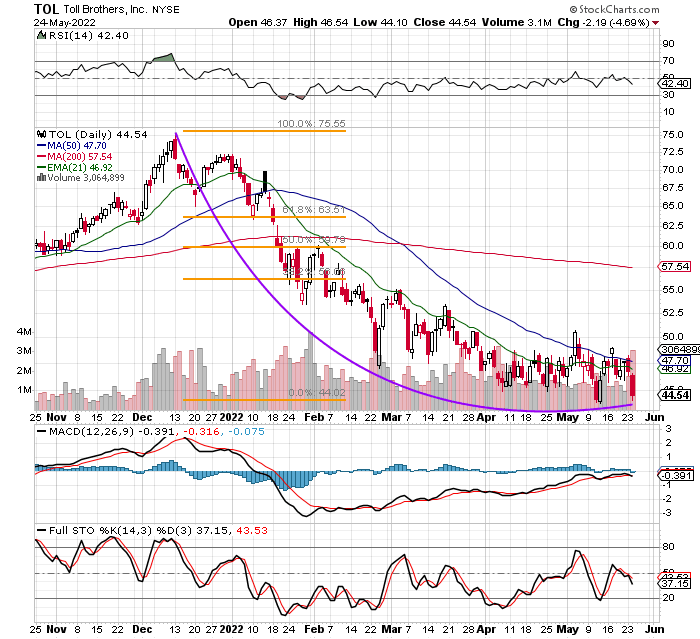 Readers can see that these shares are nowhere near being overbought nor oversold. The shares sold off fairly hard from December into March and have traded sideways (consolidated) ever since. As the move occurred more gradually than it has for the broader market and has stabilized better than said market, one has to decide just what we are seeing.

An optimist would see a stock that is about halfway through developing a cup or cup with handle pattern. A less optimistic trader might see a flat base of two months that has brought the stock's 21-day exponential moving average (EMA) and 50-day simple moving average (SMA) down with it. Can an investor buy some here? Technically, that's not a bad idea. Fundamentally? Toll Brothers is executing well. The balance sheet is subject, but for good reason.

Why I won't buy Toll Brothers on this report has everything to do with the macro. We might see tightening monetary conditions as reason enough to push certain buyers out of the market for higher-end new homes and into the market for existing homes (those are also in decline). On the other hand, should labor markets hold up (extremely questionable), existing homes and perhaps new starter-type homes might find interest expressed by younger or middle and lower middle-class families that had been priced out of real estate.

That does nothing for the higher end, though. Should the economy continue to slow and should the nation go through an economic recession, home builders such as Toll will find buyers, but in my opinion, margin suffers. How much? I don't know.

Get an email alert each time I write an article for Real Money. Click the "+Follow" next to my byline to this article.
TAGS: Earnings | Fundamental Analysis | Investing | Stocks | Technical Analysis | Housing Market | Real Money | Consumer Discretionary