What's next for the stock? Let's go to the charts to find out. 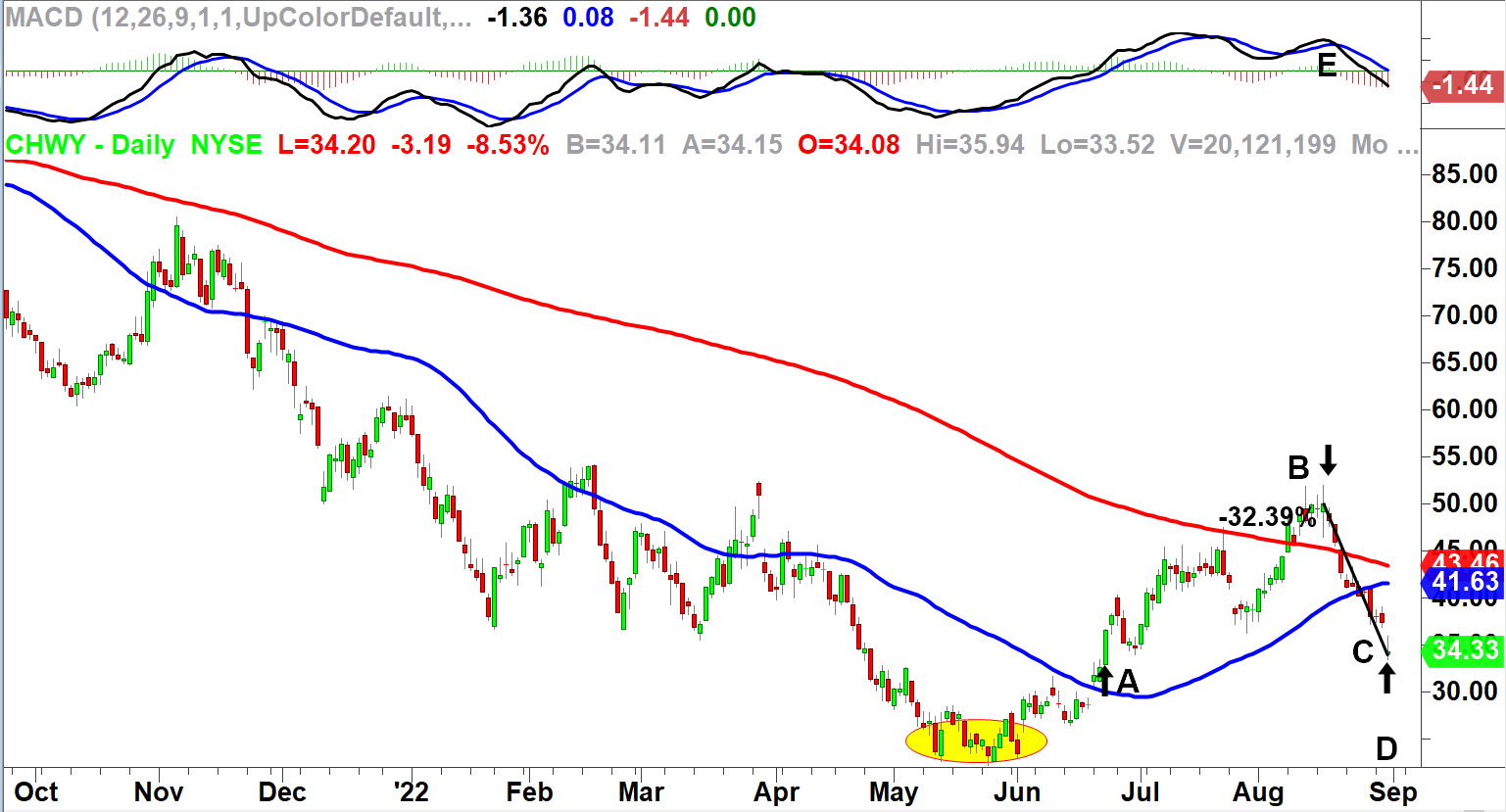 Unfortunately, we only closed part of the position at $47. We held on to half, encouraged by the quick rally to our target.

Since peaking on Aug. 16, Chewy has been headed downhill. Over the past two weeks, the stock has lost about 32% of its value.

On Wednesday, Chewy lowered revenue expectations for the quarter ending in October from $2.57 billion to $2.45 billion. Chewy also reduced revenue estimates for the full year.

As a result, the stock closed at a two-month low of $34.33. We've exited this position with a small loss of about $2 per share (point C).

Chewy is trading below its 50-day (blue) and 200-day (red) moving averages, indicating further downside ahead. Major support is near $24 (point D), thanks to a cluster that formed in May (shaded yellow).

Chewy is the fourth long position we've closed this week; here are the other three. The bears have gained the upper hand for the moment and I have no intention of fighting them.

According to a statement released by Chewy, consumers are responding to an uncertain economic environment by cutting back on purchases. This is in stark contrast to the early days of the pandemic, when consumers, stuck at home and with stimulus in hand, spent freely on their pets.

Frankly, I'm irritated that I held the second half of that position until it drifted below my entry point. Chewy's MACD (moving average convergence divergence) flashed a sell signal on Aug. 18 (point E), two days after it peaked above $50. That was my cue to exit, but I tried to squeeze out further gains.

I still believe Chewy has a bright future. The company recently launched CarePlus, an insurance product for pets. While this move won't materially impact 2022 earnings, it positions Chewy in a high-margin, underserved market.

Despite this positive development, I see no reason to hold the stock as it falls. I'll look to reload shares of Chewy in the mid-$20s.

Get an email alert each time I write an article for Real Money. Click the "+Follow" next to my byline to this article.
TAGS: Earnings | Investing | Stocks | Technical Analysis | Pets | Retail | E-Commerce | Real Money