Let's check in on the 10-day moving average of the put/call ratio, because it is now at 1.16 -- Wednesday's action is not on the chart. The first thing to notice is that this is likely to peak this week, and prior peaks have seen rallies. OK, we knew that since we looked at this earlier in the week, and noted it.

The second thing to notice is that after the 2020 low, this indicator went into a new range with .70 at the low end and 0.95 at the high end. Prior to that, for many years, the range was higher. The 2022 action has put it back in the prior range.

Sticking with sentiment, we have the Investors Intelligence bears. They scurried higher to 39%. Wow. That means the bears chimed in this week just over one point from where they peaked in March 2020. 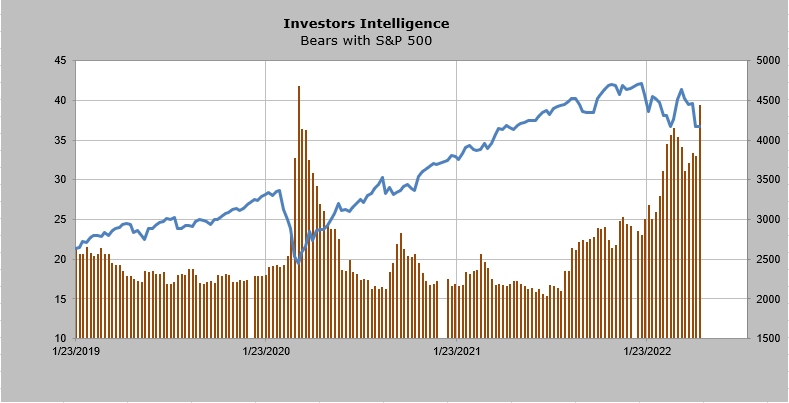 Someone will surely want to see a chart of Investors Intelligence bears from 2008, so here it is. Because of all the data on the chart, it's hard to see, but all those peak readings in 2008, starting with March 2008 during the Bear Stearns low, gave way to a rally of approximately 10%.

Please note that peak bearishness was in October 2008 (the same point when we had the internal peak for so many indicators, such as peak new lows, peak oversoldness, etc.). By the time March 2009 rolled around, which was the low, bears were down to 35%, not 55% as they were in October. 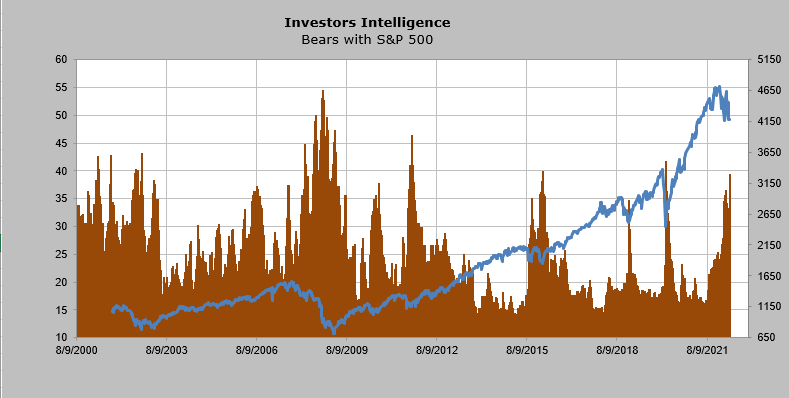 Away from sentiment breath was good not great but it was enough to halt the decline in the McClellan Summation Index.

As always, the key will be how fast folks get bullish. I can already see some narratives shifting, but nothing wholesale in terms of folks changing camps from bear to bull. I expect when we see the American Association of Individual Investors' (AAII) report survey results on Thursday, they will show a decline from that 60% bears we saw last week. That will be the first test to tell us the shift.

The market is not yet overbought, so even if we are down on Thursday, we should try and rally again. There is still plenty of resistance overhead, so we shouldn't be shocked if we get some short-term stalling out. And let me remind you once again that this is not a market to get comfortable in.