I really thought the market would and could hold out for one more day before it started into its pullback, but it jumped the gun and began on Thursday.

That doesn't change my view. I said I thought we'd pull back next week, and I still think so.

Because we're overbought. And we find the Overbought/Oversold Oscillator at a lower high, which is a negative divergence. You can see Nasdaq's Oscillator moved up. That is not a mistake; breadth was simply not as bad as it was 10 trading days ago. But what you can clearly see on the chart is we are not oversold.

I noted on Thursday that breadth was not terribly inspiring on the run up on "Fed Day." It was even worse on Thursday. That means the McClellan Summation Index tipped downward. You might need to squint to see it, but it too is turning down from a lower high. It would now require a net differential of positive 1,300 advancers minus decliners on the New York Stock Exchange to turn it back up.

This brings us back to the Either/Or Market theme. It remains in effect as far as I am concerned, even though energy finally pulled back this week. Take a look at the Invesco QQQ fund (QQQ) from last summer. Now look at the Bank Index from that same time. That was a near 15% decline in the Bank Index while the QQQs rallied 20%.

Now take a look at the rally in the banks, which is roughly 25% in the last two months. As of now the QQQs are only down 7%, but they were down more. To me, the banks look way overextended, the same as the QQQs did last August.

Now let's turn to sentiment. Look at the National Association of Active Investment Managers (NAAIM), where their exposure was down to 48 last week from 108 a few weeks prior. It jumped to 77% this week. While they may not be as overexposed as they were a month ago, they are back into a complacent area.

But it is the four-week moving average of American Association of Individual Investors' bears that caught my eye this week, because relative to where it has been these last few years, it now resides on the low side. I think this will likely change in the next week. We should see bears rise if we get that pullback I envision. 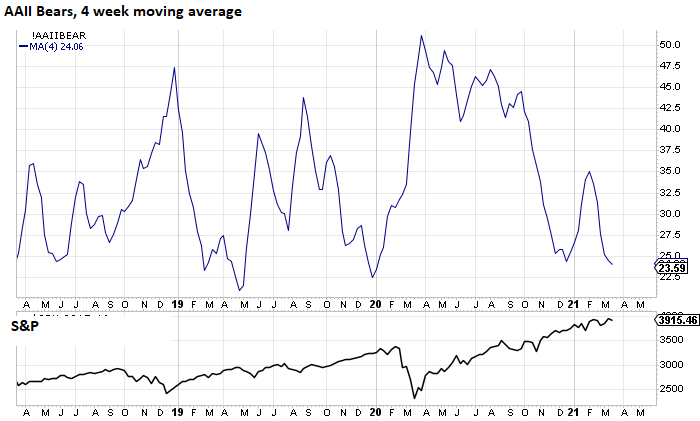 I will end by noting that the Daily Sentiment Index (DSI) for bonds is back to single digits. The one observation I have is that for weeks my inbox was filled, almost daily with questions on the bond DSI, asking, "Are we there yet?" -- meaning has the DSI gotten to single digits. But Thursday I had not one question. Have we gotten to the point that no one wants to bottom fish the bonds anymore? If so they are due for a bounce.