Beavis: "The stock sold off after hours"

Elite semiconductor chip company Nvidia (NVDA) released its fiscal first-quarter results on Wednesday evening. For the three-month period ended May 1 Nvidia posted adjusted earnings per share of $1.36 (GAAP EPS: $0.64) on revenue of $8.288 billion. Both the adjusted bottom-line and top-line numbers exceeded expectations while that sales print was good enough for year-over-year growth of 46.3% and good enough for a new Nvidia quarterly record. The adjustment includes an after-tax negative impact of 52 cents a share related to the $1.35 billion Arm acquisition termination charge. Adjusted earnings grew 49% year over years.

So, Why the Overnight Pressure?

Like Beavis said. it was in the guidance. Nvidia sees current quarter revenue running at about $8.1 billion, plus or minus 2%). This includes an estimated reduction of approximately $500 million ($400 million in gaming and $100 million in the Data Center) related to Russia's war in eastern Europe and the COVID lockdowns in China. The street had been at $8.45 billion on this metric, which would be good for year-over-year growth of 33.5%.

Note that the $500 million haircut would have put Nvidia over the top as far as consensus view is concerned and that $8.1 billion would still amount to annual growth of 27.9%. Adjusted gross margin is expected to stay put at 67.1% (plus or minus 50 basis points, while adjusted operating expenses are seen at $1.75 billion. Nvidia sees an effective tax rate of 12.5%.

Data Center: Revenue of $3.75 billion was a new segment record and up 83% from the year-ago comp. This also beat expectations.

Gaming: Revenue of $3.62 billion was a new segment record and up 31% versus the year-ago comp. This number beat expectations.

Professional Visualization: Revenue of $622 million was up 67% from a year ago, but fell slightly short of expectations.

Automotive and Robotics: Revenue of $138 million was down 10% from a year ago and fell short of expectations.

Nvidia repurchased $2 billiionh of common stock during the quarter reported. Earlier this week, the board of directors approved and increased the share repurchase program to $15 billion, expiring in December 2023. On Wednesday, Nvidia also declared a quarterly dividend of $0.04, which is unchanged from the past three quarters and yields just 0.09%. This particular distribution will be payable July 1 to shareholders of record on June 9.

Nvidia ended the quarter with a net cash position of $20.338 billion and current assets of $29.575 billion, including $3.163 billion in inventories. Current liabilities add up to just $5.562 billion. That leaves Nvidia with a current ratio of 5.32, which is stellar. Sans inventories, Nvidia stands with a quick ratio of 4.75. Also stellar.

Total assets amount to $45.212 billion, including $6.576 billion of "goodwill" and other intangibles. Total liabilities less equity runs at $18.892 billion, including $10.947 billion in long-term debt. Nvidia can pay off its long-term debt almost twice over just out of its pocket. This balance sheet is indeed pristine. Yes, Nvidia passes the Sarge test with flying colors.

So far, I have found 13 sell-side analysts that are rated at five stars by TipRanks who have opined on Nvidia since these earnings were released last night. There were a number of analysts who maintained or reiterated a positive rating but took their target prices lower.

First off, if you're new to me, I am long NVDA. I have traded in and out of the bulk of my position without ever going flat and am in the process of rebuilding this position to its former size. The stock sold off as low as $152 last night. I bought more at $155 and bid $149 for more. That lower bid was never hit. The stock closed at 31x forward earrings, which is likely expensive in this environment (the stock traded down to 28x overnight). Then one must consider that Nvidia is the cutting-edge leader in providing at an elite level what is needed for tomorrow. Everyone's tomorrow. Artificial intelligence, Gaming, Machine learning, the corporate migration from on-premise to the cloud (Data Center), and to a lesser degree, autonomous driving and even crypto, if that asset class can regain its former status. 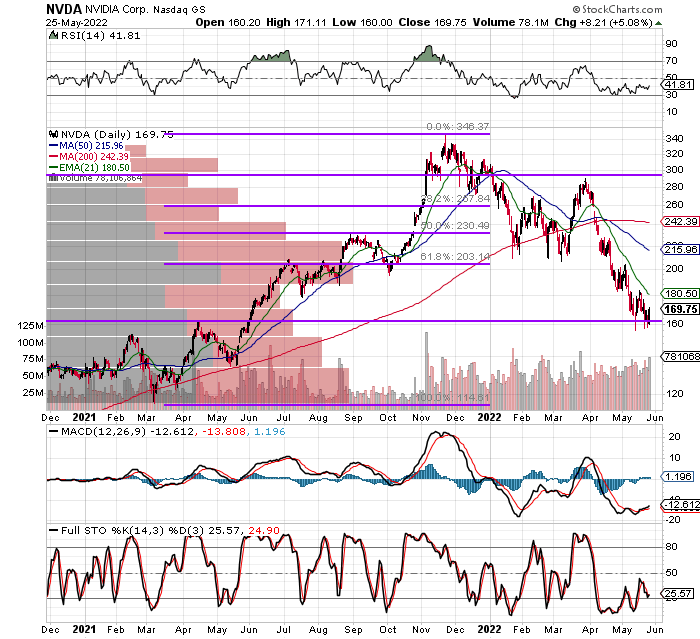 Readers will note that though NVDA has been in something of a death spiral since peaking in November, there does seem to have been a recent attempt made by Mr. Market to form up support close to the 78.6% Fibonacci retracement level (that I had to draw in for you) of the March 2021 through November 2021 rally. That spot is close to $164.86. It would be important to me and those in my position if the stock could try to retake that level ahead of the three-day weekend. 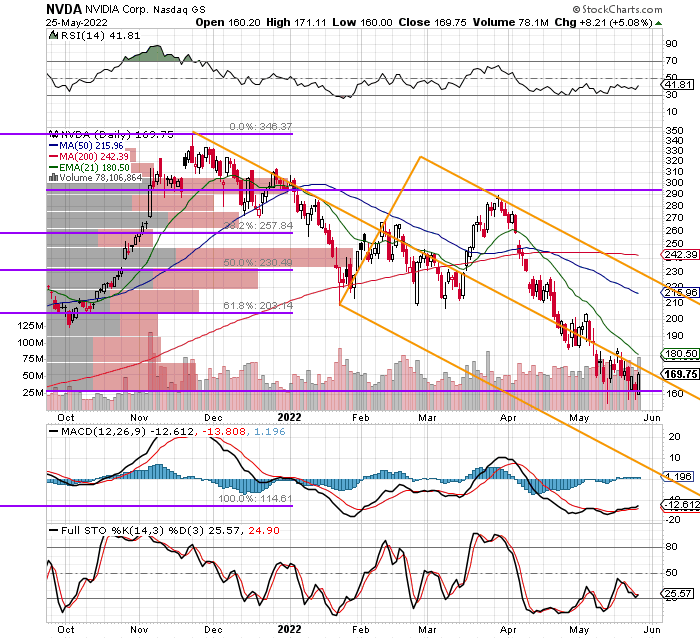 Zooming in, readers will see that the current down trend fits neatly into an Andrews' Pitchfork downward sloping model. The stock has more or less stayed close to the central trend line. I think we need to see that trend line turn into support as the stock makes a run at the 21-day exponential moving average ($180). That's my moving pivot for now, which would place my current target almost precisely upon the 50-day simple moving average ($216). For now, the daily moving average convergence divergence (MACD) appears to want to give us a bullish crossover.

Get an email alert each time I write an article for Real Money. Click the "+Follow" next to my byline to this article.
TAGS: Earnings | Fundamental Analysis | Investing | Stocks | Technical Analysis | Semiconductors & Semiconductor Equipment | Real Money Pro | Analyst Actions

Amazon Shares Break a Long-Term Uptrend on the Charts

Let's see what the charts are suggesting now.

Trading These 3 Major Index ETFs Looks Unappealing at This Juncture

The charts indicate that even the SPDR Dow Jones Industrial Average ETF, which has been a bright spot since early October, appears to be losing steam.

The Fed remains very hawkish, and the market's inclination to fight it has been a consistent mistake this year.