The stock and fortunes of antibiotic-developer Spero Therapeutics (SPRO)  looked like they were about to get flushed down the toilet ... until last week.

The company's primary and only significant asset in development is tebipenem pivoxil hydrobromide (tebipenem HBr). This candidate is being developed as the first oral carbapenem antibiotic to potentially treat complicated urinary tract infections including pyelonephritis, caused by certain bacteria. 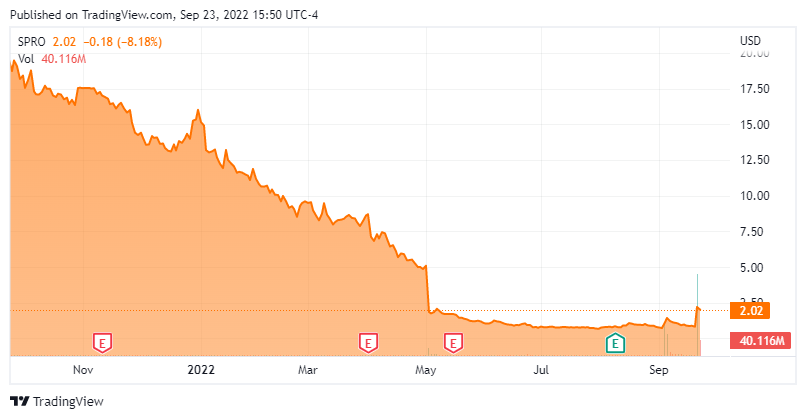 The company seemed to have suffered a death blow this June when the Food and Drug Administration declined to approve the drug. The federal agency cited that a late-stage study conducted by Spero was insufficient to support approval. Then the company got a reprieve early this month when the FDA agreed to review results from a single additional phase 3 trial to support approval.

Then on Thursday, a White Knight appeared in the form of GlaxoSmithKline (GSK) , which announced a licensing deal around tebipenem HBr. The agreement will give the drug giant the global rights to develop and commercialize tebipenem pivoxil HBr in all countries except Japan and certain other Asian countries, which Spero's partner Meiji Seika will retain. In addition, Spero will be responsible for the execution and costs of the remaining and pivotal phase 3 trial of tebipenem HBr, while Glaxo will handle and fund all other activities around tebipenem HBr.

The stock rose nearly 170% in trading on Thursday triggered by this unexpected news. The stock gave back 10% during the ugly market on Friday. I don't usually chase they sort of rip your face off rallies. However, after analyzing the financial details of the licensing agreement, Spero still seems significantly undervalued and set up well as a covered call candidate. Even after Thursday's rally, the stock has less than a $50 million market cap. Not much more than the just under $40 million in net cash the company had on its balance sheet prior to this announcement.

The licensing deal provides Spero with a $66 million upfront payment. Glaxo will also make a $9 million equity investment in this small-cap biotech. In addition, Spero will garner up to another $150 million in milestone payments for successfully delivery of is ongoing Phase 3 study and up to another $150 million on the first commercialized sales in the United States and in Europe. Add in sales milestones which begin at a $25 million payout on the first $200 million in net sales. Now I wasn't a math major in college, but Spero seems a very compelling 'sum of the parts' story at current trading levels. Here is how I acted on the opportunity Friday morning and again in the afternoon.

Here is how one can initiate a position in SPRO via a covered call strategy. Using the January $2.50 call strikes, fashion a covered call order with a net debit in the $1.35 to $1.45 a share range (net stock price - option premium). Liquidity varies, but my covered call orders filled within ten minutes Friday morning and again in the afternoon during my second round of orders. This strategy provides around 30% of downside protection. It also offers approximately 80% of upside potential if the shares move to the $2.50 level or nearly 45% profits if the stock trades sideways.

(Please note that due to factors including low market capitalization and/or insufficient public float, we consider Spero to be a small-cap stock. You should be aware that such stocks are subject to more risk than stocks of larger companies, including greater volatility, lower liquidity and less publicly available information, and that postings such as this one can have an effect on their stock prices.)

Get an email alert each time I write an article for Real Money. Click the "+Follow" next to my byline to this article.
TAGS: Investing | Options | Stocks | Biotechnology | Healthcare | Pharmaceuticals