At least the market rallied on Wednesday, even if the Dow Jones industrial average and Nasdaq merely gained back what it lost on Tuesday.

I wouldn't even be surprised if we saw the market retreat on Thursday or Friday, only to rally again next week. Yes, I am still waiting for that overbought condition. It's still hard to peg it, but I'm penciling in mid- to-late next week.

Just in case you look at the Oscillators and wonder why they didn't shoot up more after Wednesday's action, it's the math. I still expect to see the Oscillators over the zero-line next week.

Breadth was good, but not great on Wednesday. Yet the New York Stock Exchange had more new highs than lows for the first time in a month. I consider that a positive. In addition if you look at the Nasdaq Hi-Lo Indicator you can see it got back to an oversold condition and is desperately trying to turn upward. 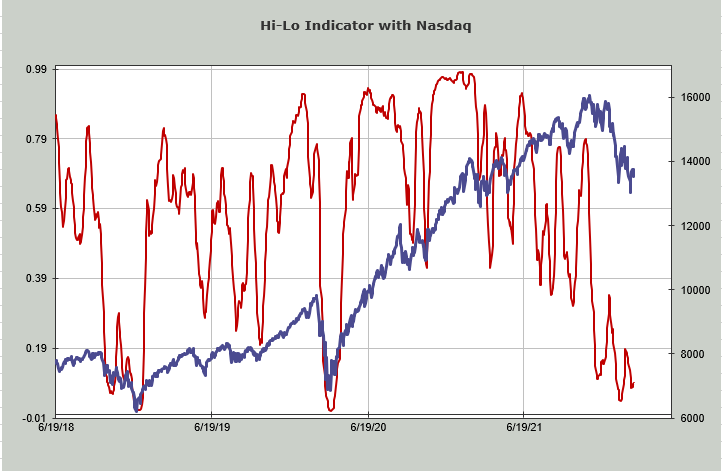 Now let's talk about sentiment. Earlier this week I noted that anecdotally it seemed to me folks were still bearish, yet the equity put/call ratio had come down quite a bit (.49 Monday and .50 on Tuesday). It was hard for me to reconcile the chatter with the actual option buying. What I noticed after Wednesday's action is that the chatter softened a bit and is catching up with the options ratios.

I have often said folks rarely go from bull to bear or bear to bull but rather first they mosey over to the fence, as if they are chatting with their neighbors. Then they sit on the fence and eventually they jump over the fence. Anecdotally, I think they took a step toward the fence on Wednesday.

Statistically speaking, though, the Investors Intelligence bulls slipped to 29.9% and bulls rose to 34.5%, which means that there are more bears than bulls for the first time since March 2020. Typically that means we are due for some sort of rally. I am sure some will look at that chart over on the left, during the 2007-2009 period and say, "But look how long it was under 1.0." 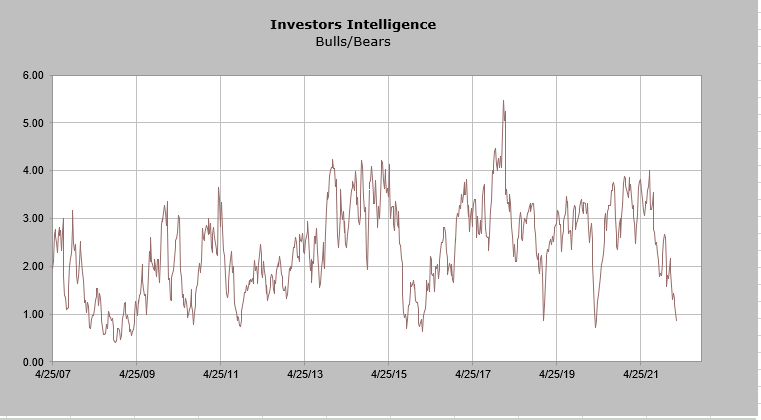 That's not exactly the case. You see there were several tags down there in that two year period and each one led to an oversold rally. And each one eventually saw more bulls than bears before it slipped again.

If the market doesn't fall apart between now and the weekend, I expect we'll see the bulls rise and bears fall next week, but in the meantime, this sentiment indicator says there are too many bears.

If we look at that shorter term put/call ratio and use a 10 day moving average we can see there is a lower high at this recent low (vs. January) and the moving average is now heading down, which should be supportive of the market (until sentiment shifts again). 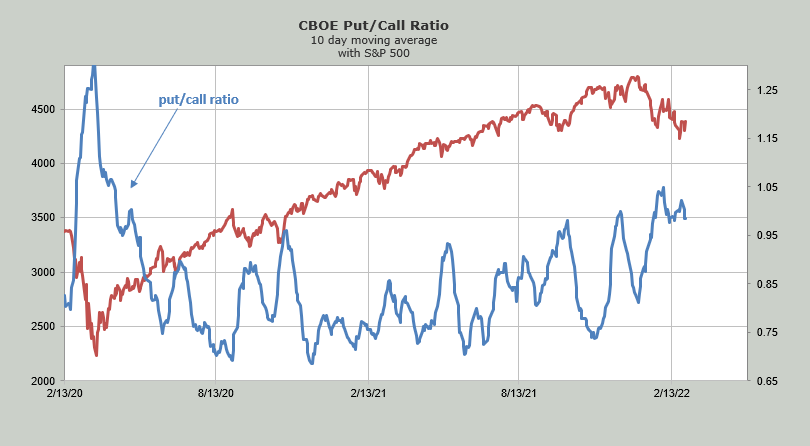 The next few days are a coin-toss to me as they can easily see some give back from Wednesday's rally but I think we'd see another rally attempt next week.

Note: There will not be a column on Friday. The next column will be March 7.