By TIMOTHY COLLINS Nov 25, 2019 | 02:06 PM EST
Stocks quotes in this article: UBER, LYFT
Two weeks ago, I took to the charts on Uber ( UBER)   expecting a breakout to the upside.
While it took a few days longer than expected, the stock did offer some 10% upside for scalpers. The disclosure that CEO Dara Khosrowshahi bought 250,000 shares for $26.75 each goosed the move. Most of the time when a CEO invests $6.6875 million into a company, it provides some confidence for bulls.
Add in two analysts upgrades, a projection for profitability in 2021, and the passing of the lock-up expiration, and bulls should have had everything they needed to take this stock back to the mid-$30s. Unfortunately, London has different ideas.
Monday, news hit that for the second time in two years, Uber lost its license to carry paying passengers in London. The company has been cited for a pattern of failures for safety and security. Drivers uploaded unauthorized photos and now it's alleged that some 14,000 rides were provided by a small number of drivers who pretended to be other people.
Before you go running for the hills, know that Uber will appeal the decision. During that time it will keep ferrying passengers. Also, during that time, expect it to continue to discuss how the company is improving driver training as well as adding new safety measures. The company said it also plans to implement facial recognition matching technology and add direct connection to emergency services. The question is: Will this be enough to satisfy concerns.
Given the international exposure, this is one of the advantages Uber has over Lyft ( LYFT) , I think just this possibility makes Lyft look like the better option here.
Uber is staring at the potential for a gap fill, but I think the easy pop higher is in the books. The upside is about equal to the downside, $2 in either direction. While the Full Stochastics isn't overbought, the sharp ramp higher has been when the money has been made. That's a day or two away from being complete. Furthermore, shares are heading into the 50-day simple moving average (SMA). None of this screams buy. While it doesn't scream short, it does say look elsewhere. 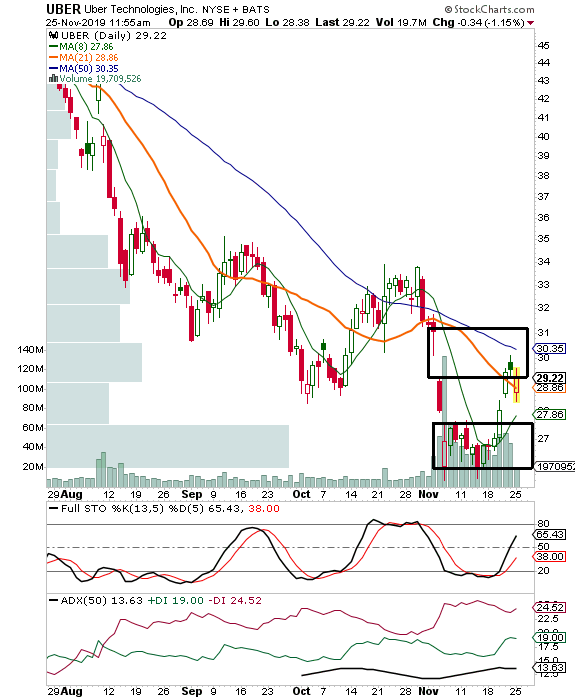 Maybe Lyft is the answer. I'd say if you want ride-share exposure, it is if the stock closes above $48.50 Monday. I see the $46.00 to $46.50 area as support. This one is close to overbought on the Full Stochastics, but might be pushed additionally by a bullish cross in the ADX. 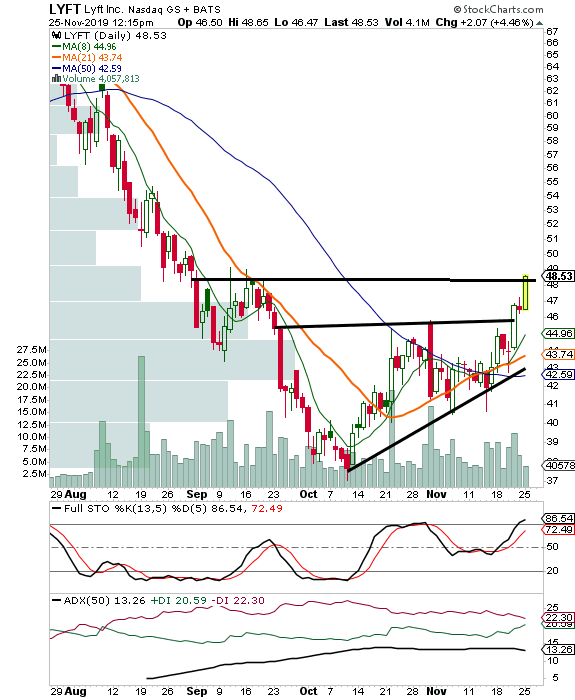 Also, we don't have a pesky SMA to contend with above the current price. I'm looking at $54 by the end of the year on this one.
Of the two, Uber and Lyft, Lyft would be my preferred choice based on Monday's Uber news and the current technical setups.
Get an email alert each time I write an article for Real Money. Click the "+Follow" next to my byline to this article.
TAGS: Investing | Stocks | Technology | Transportation | Stock of the Day

Sit Down For This: The Dow's Been Sagging for 5 Days Straight

The Dow and the Russell 2000 are now at their 50-day moving averages -- here's what that means for the market.