Wednesday was definitely a much slower market than we've seen all week. Nasdaq's total volume was the lowest of the month. And over on the New York Stock Exchange, upside volume was only 56%. I think it is because the market needs a little rest or a pullback. But I do think it can then rally again.

There were a few items of interest, despite the quiet session. First of all, bonds. They had quite a move down, which should be no surprise to us. The curious part is that banks reacted with a positive move, but mega-cap tech only stalled, it didn't get sold. That does beg the question: Is that correlation done? You know the one I mean -- rates up, growth stocks down. I think it is too soon to say, but it does bear watching, since as we know all correlations eventually end.

Now, I did see several folks who just a week ago were convinced bond yields would continue down, change their mind and note that bonds will now go down and yields will go up. Folks seem to be excited over yields crossing this downtrend line.

I do think rates made a low back in late July and again in early August, as you know, but I can see a crossing of that line and then some sideways action with an eventual move to the 1.50% area. I can also see a lot of whipsaw in the next few months in bond-land.

Away from that, we have sentiment. The Investors Intelligence bulls dipped to 50%. Now this is likely reflecting last week's move more than this week's, but as you can see on the chart 50% is the lowest since May of 2020. I consider that a positive overall for the market, because, despite what the S&P has done, we all know the majority of stocks have been down for a few months now. I suspect next week's reading sees quite a jump upward in bulls. 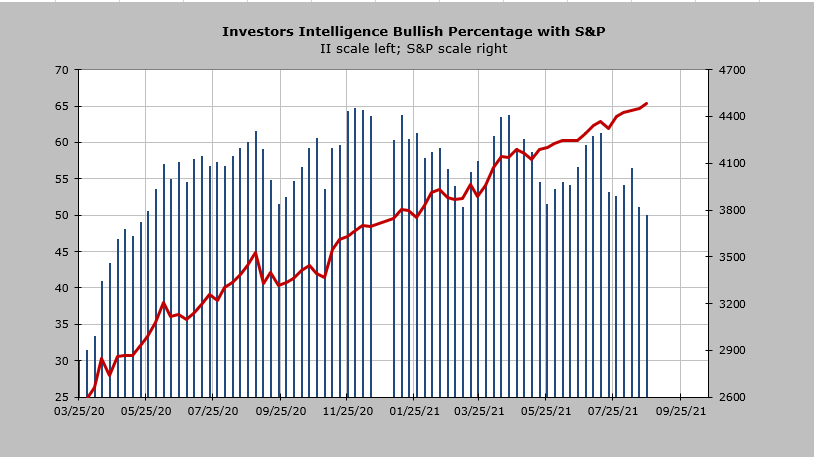 Now I know you will ask how does this square with the Daily Sentiment Index (DSI) and the answer is it doesn't. The DSI is quite specific to the actual index and not necessarily individual stocks whereas the Investors Intelligence readings are more in line with what stocks are doing.

Speaking of the DSI, it hasn't changed, Nasdaq remains at 90 and the S&P is at 86. Also, those resistance trendlines haven't changed, either. A pullback would reset these very short-term indicators.