I'm sure some of you love politics, and if given a chance, you'd probably run for office or volunteer for a local campaign. But given how toxic the two-party system has become, it seems like a no-win situation -- lots of arguing without a moment of compromise. The only job that seems less appealing is determining if the U.S. is in or ever has been in a recession.

As you probably know, determining whether the U.S. is in a recession falls on the folks at the National Bureau of Economic Research (NBER). And while there is a general formula these people follow when making their determination, it can't be fun knowing that the administration and an endless number of politicians with little to no expertise in economics will likely debate and question their findings.

Regarding Wednesday's Fed policy statement, Fed Chairman Jay Powell told us what we expected to hear. The committee raised rates by 75 basis points, discussed some economic weaknesses and reiterated that growth must slow down. The Fed didn't give us much to work with from a trading perspective.

While I'm sure someone out there will attempt to extract a market-moving message from the chairman's news conference, I believe traders should stick with following price and leave the econospeak to the academics and talking heads on TV.

Many investors are already trying to game when the Fed begins cutting rates. However, with inflation still well above the fed funds rate, and keeping in mind that the Fed pivoted from the assumption that inflation is transitory to an outright 5-alarm fire in a couple months, I can't get on board with any thesis built around potential rate cuts.

I see the decline in oil, lumber and other commodities. I'm also not ignoring the chatter around a potential recession. But I believe the Fed is flat-out petrified of inflation staying near current levels for a sustained period, and I think the committee is willing to let rates rise further and stay elevated longer in the interest of lowering inflation. 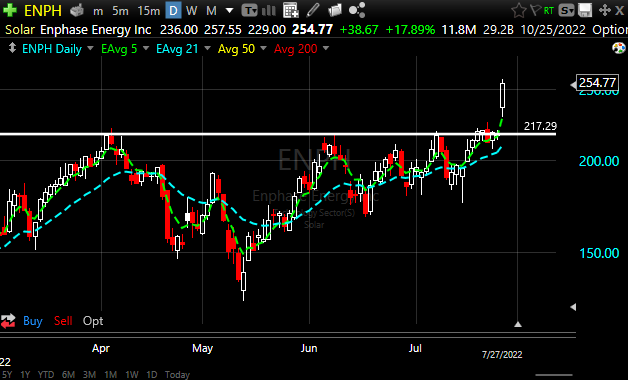 Turning to stocks, you can see on the chart above how Tuesday's after-hours strength in shares of Enphase Energy (ENPH) carried through into Wednesday's session and the stock gained nearly 18%. While I love the chart, I want to wait for the first hint of a pullback of consolidation before looking for my entry. A few sideways consolidation days and a bit of catch-up by the 5-day exponential moving average (EMA) are on my radar.

Investors should also have an eye on SolarEdge Technologies (SEDG) . While everyone places ENPH and SEDG into the same basket as other solar companies, they're very different. ENPH and SEDG aren't the guys that merely toss solar panels on the roof. These guys are in the energy storage solution (ESS) market, and it's a market with skyrocketing demand from the Midwest and Texas to the West Coast. Just look at Tuesday's earnings report from Enphase!

The bottom line is that SolarEdge has a chart nearly identical to ENPH, and based on SEDG's stock performance investors expect similarly strong results from the company when it reports results next Tuesday.

As far as the Invesco QQQ Trust (QQQ) is concerned, I'm still looking for initial resistance around $314.55. But given how evident that resistance is, and assuming tech earnings come in more like Alphabet (GOOGL) and Microsoft (MSFT) and less like Snap Inc. (SNAP) and Tenable Holdings (TENB) , I think the QQQ has a shot at $330 before a deeper correction and a trip back down toward the early July lows.