Last Friday when the University of Michigan Sentiment reading came out, I was bombarded with emails about how bearish this was for stocks and the economy. Didn't I see the economy was already in recession? Didn't I know how bad this was? Didn't I see that the Fed was the problem? How could I possibly think we could rally this week?

I have never paid much attention to that particular sentiment gauge, but clearly it seems so many have and, since it was the lowest on record, it was terrible. It always meant recession. My gosh, folks were fawning over it as if it was the holy grail of markets.

Fast forward to my column from Tuesday -- before the Fed meeting. I said the market was somewhat or moderately oversold and sentiment had gotten back to bearish with the Daily Sentiment Index (DSI) at single digits for bonds and both the S&P and Nasdaq. And that meant we should rally. This was no different than what I had said on Monday and Tuesday, after the horrendous report from the University of Michigan. Only now I had data and charts to show.

Yet, I was bombarded with questions about why wasn't I more bullish? Didn't I see how oversold we were? Didn't I see the DSI was single digits?

I tell you my head is spinning!

But isn't that the emotional rollercoaster we've been on most of this year? Isn't that why I showed you the chart of the Sentiment Cycle on Monday -- here it is again -- noting that below that horizontal line there are a lot of short and sharp moves. There is no real trend that takes place. There is a lot of whiplash. I also think the Russell 2000 may have hit "Discouragement" on this last move down. 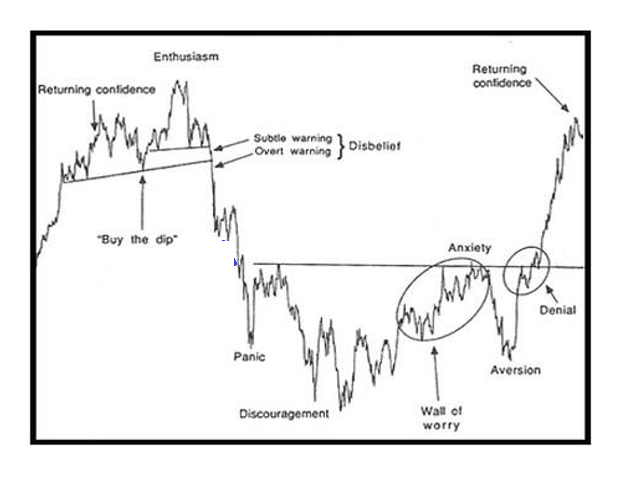 I try and focus on the indicators and not get emotional about the market. The indicators say we are oversold. The indicators also say we could just as easily see some give back from Wednesday's rally the remainder of this week as we could rally. But generally speaking we will not be overbought again until late next week. So that's where I am focused.

We discussed the Russell 2000 fund (IWM)  the other day with those twin lows when the S&P went to a lower low, but the small caps held. We have also recently discussed that still declining 50-day moving average. When we last checked in on it, early last week, it was around $190-$193 and you can see that it kept the rally in check.

It is currently just over $185. That gap down from last Friday comes in around $183. Should IWM get to that gap-fill area late next week it is possible it will coincide there with the still declining 50-day moving average.

If the indicators are indeed overbought and sentiment is more complacent once again as we get there, it will be interesting to see the reaction folks have. Will they be more bullish than they were in early June or will they be more bearish?

Time will tell and I am certain I will be taken to task for whatever view I have, because that's the kind of market we're in.

Get an email alert each time I write an article for Real Money. Click the "+Follow" next to my byline to this article.
TAGS: Federal Reserve | Investing | Small Cap | Stocks |