By TIMOTHY COLLINS Aug 05, 2021 | 12:12 PM EDT
Stocks quotes in this article: PENN, SCR, GENI, DKNG, GMBL
Gaming and online sports books are getting a boost Thursday from two deals.
First, Penn National Gaming ( PENN) scooped up the rest of Score Media and Gaming ( SCR) . It already held around 10% of the company and the partnership the companies had in place pointed toward this buyout eventually happening. I wrote about it in late December.
Second, we have Genius Sports ( GENI) teaming up with Draftkings ( DKNG) . GENI will provide DKNG with official sports book data, content, and services for a complete suite of NFL-related products as well as into other areas like NASCAR and the English Premier League. Ironically, this deal hit the wires right about the same time a Spruce Point short call on GENI was released. Spruce Point mentioned how DKNG was better positioned. I'm guessing they wrote that up before learning about the partnership between GENI and DKNG.
I like to trade around in this area with the lower valuation names as I see the big players eventually scooping up most of the smaller ones, integrating what they need, then selling off little pieces they don't need. I believe Esports Entertainment Group ( GMBL)  could fall into that category one day.
GMBL is bit more diverse and less concentrated than other names in the space, but they have some growing and integration to do before I think anyone gets too aggressive trying to scoop them up. Their growing relationships though with NFL teams may ultimately be the biggest carrot dangling out there for another player in the space. Also, expect them to spin out their crypto mining application, ggCircuit, in the near future. I think this will be a move to raise cash and unlock value while maintaining some ownership in the subsidiary. Don't expect it this month or this year, but I could see it happening next year once it becomes more established. 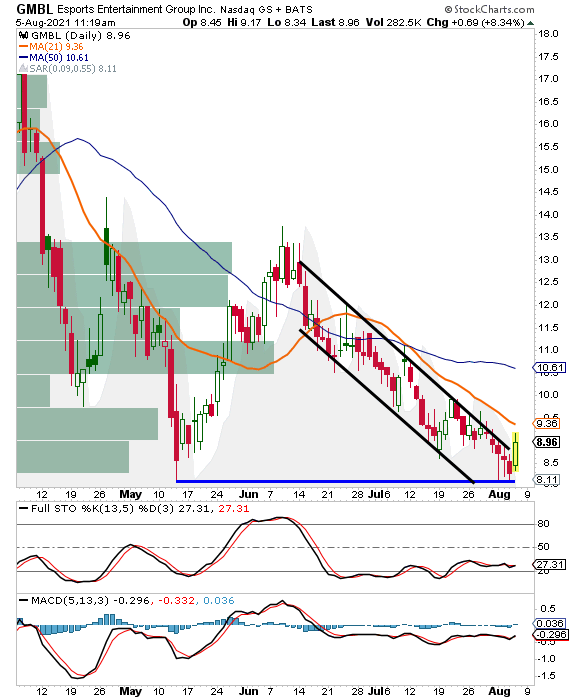 In terms of the price action, we're seeing a reversal on the daily chart of GMBL. The stock has shown $8 as a floor. If that fails, then this becomes a position to exit; however, we have a bullish crossover in the MACD and parabolic stop-and-reverse (PSAR) today along with price breaking above resistance. The Full Stochastics indicator has made a high low as well. Buyers do need to chew through the 21-day simple moving average (SMA), but I believe the risk-reward here favors the reward when looking out three months, six months, and longer.
Get an email alert each time I write an article for Real Money. Click the "+Follow" next to my byline to this article.
TAGS: Investing | Stocks | Gaming | eSports

If You Buy Now in This Bear-Bull Battle, You May Be Paying Later

You really want to snag a bargain -- and bank a win -- right now. Here's a better strategy.