I saw the news on Monday as most of you did. I had already been back in Amazon (AMZN) post-split, long an entry-size position with the intention of scaling into the stock if it would, or merely placing a trade if it would not. That said, I like the thinking. I like the idea of Amazon scheduling a Prime Early Access Sale for Oct. 11 and 12, which sounds a lot like a second Prime Day for calendar year 2022. The first Prime Day back in July provoked consumers to purchase more than 300 million items, and that was just at Amazon.

These days also force Amazon's competitors such as Target TGT and Walmart WMT to compete. We already know that those two retailers have played the inventory game and lost quite decisively this year. Competing could help those competitors move some of that inventory, but at margin-crushing prices. How much of a help that is, I am unsure. What I am sure of is that lengthening the holiday shopping season in a year where many consumers are probably going to make a conscious effort to spend less is brilliant. Let's discuss.

This company is not the growth monster it once was. For the second quarter that ended June 30, Amazon posted a GAAP loss per share of $0.20, down from a profit of $0.76 for the year-ago period on revenue of $121.23 billion, which was good enough for year-over-year growth of 7%. While that top-line number did beat the street, this was the third consecutive quarter of single-digit revenue growth for Amazon. As for the bottom line, this number badly missed expectations while also printing as the second straight quarter where Amazon lost money outright.

The disappointing second-quarter numbers continued. Operating cash flow over the trailing 12 months decreased 40% while free cash flow over those 12 months swung from an inflow of $12.1 billion the prior year to an outflow of $23.5 billion. Operating income for the quarter dropped 57%. Amazon Web Services, the company's growth and margin darling, may have seen its environment slow but was still the companywide champion. AWS produced sales growth of 33.3% to $19.739 billion as operating income increased. It's everywhere else that Amazon would commit to increase fees and surcharges and cut back on rising expenses.

For the third quarter, Wall Street is looking for GAAP EPS of $0.22, which is within the range of 34 sell-side analysts who are placing this number between -$0.05 and +$0.39. The year-ago comp was $0.31, but I think most investors will be relieved to see a positive number at this point. Revenue is seen at $128 billion. That would be good for growth of 15%, which would be fantastic. The high and low for the range of revenue expectations run from $125 billion to $131 billion, so almost everyone is in the same ballpark on sales. It's Amazon's success in expanding margin that will be in question.

This is where I hope to see improvement. Readers may recall that as of the end of Amazon's second quarter it had embarrassingly seen its current ratio drop to less than 1 after the first quarter and was unable to correct this situation in the second quarter. Amazon closed the period that ended June 30 with a net cash position of $60.71 billion, down from $66.049 billion, and inventories totaling $38.153 billion. This left current assets at $133.667 billion. Current liabilities totaled $140.291 billion, placing Amazon's current ratio at 0.95 and its quick ratio at 0.68.

Total assets came to $419.728 billion, including $20.195 billion in goodwill, which is fine. Amazon entered no other intangible assets. Total liabilities less equity amounted to $288.326 billion, including $64.853 billion in long-term debt. Amazon's cash position nearly covers this, so the size of the debt load is not all that alarming as long as the rates are set. It will be difficult to go back to that well, or at least not so cheaply in this monetary environment.

It really is only the current situation that needs to be fixed. Amazon is in good shape overall, with a tangible book value as of Q2 of $111.207 billion, or $10.92 per share. That's only 65 cents off Amazon's all-time high, which came as recently as the December quarter.

I only noticed one sell-side analyst who publicly reacted to the announcement of a second 2022 Prime sales event. Nicholas Jonas of JMP Securities, who is rated at five stars by TipRanks, maintained his "buy" rating on AMZN with a target price of $180. Jonas suggests that possibly through the elongating of the holiday season that supply chain issues could ease. On that I agree. I also believe that by provoking consumers earlier, the season could end up totaling more in sales than it might have. That's key. More sales and more activity on the site mean more advertising dollars. 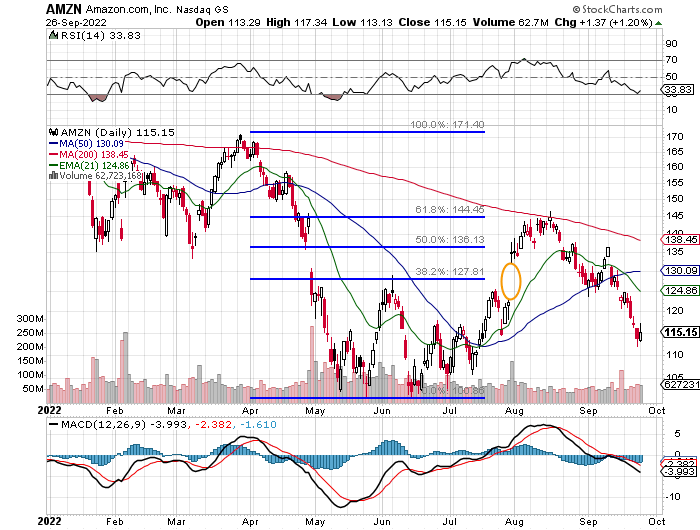 The stock is obviously in lousy shape. AMZN sold off hard late March into early May, where stiff algorithmic support was tested repeatedly into July without failure. The stock then rallied almost a precise 38.2% into mid-August and has softened ever since. Both Relative Strength and the daily moving average convergence divergence (MACD) are weak without being quite oversold.

My plan, and I am not sure that it is a good one (I know that if AMZN trades higher without me, I'll be ticked off), is to scale the name into that $101 support level incrementally. I only have one toe in the water now. I see $99 and I'll pull the plug on this trade. The 200-day simple moving average is still trending lower. The 50-day SMA? Yup, still trending higher. The shares retake that line prior to downturn? I'll add on momentum. The line turns lower and the shares retake that line after its heads south? I'll take profits (or losses) at that point.

(AMZN is a holding of Action Alerts PLUS. Want to be alerted before the portfolio buys or sells these stocks? Learn more now.)

Get an email alert each time I write an article for Real Money. Click the "+Follow" next to my byline to this article.
TAGS: Earnings | Fundamental Analysis | Investing | Stocks | Technical Analysis | Consumer | Software & Services | Technology | E-Commerce | Real Money