If we're in a range-bound market for the next few months, it probably doesn't make much sense to turn bearish with the S&P 500 sitting at 3,900 and the Nasdaq Composite hovering around 11,500. But it's a tough call because both indexes are teetering on the edge. One more drop and it's awfully difficult to see how we avoid a retest of the mid-June lows. 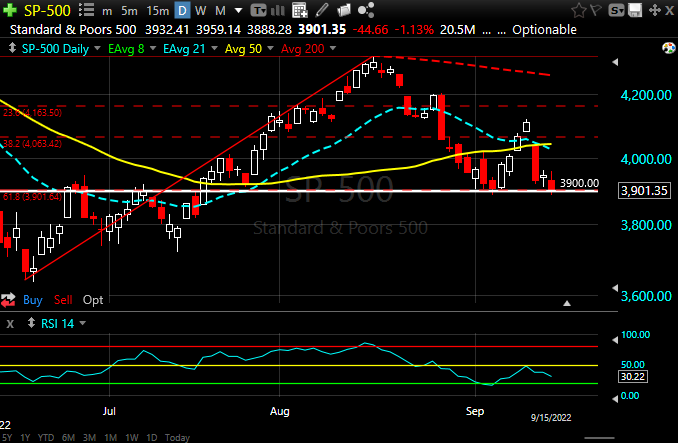 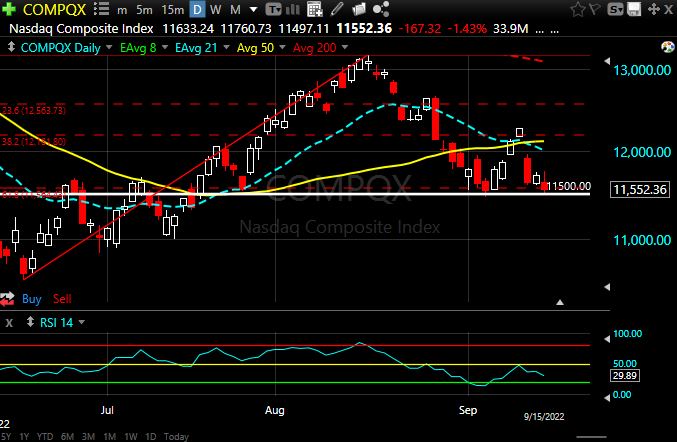 Most traders who like to keep things simple are probably watching the levels I just mentioned. They're both around the 61.8% retracement from the mid-June to mid-August rally, they line up with support from earlier in the summer, and buyers have defended the area several times.

Given the poor charts and the lack of bullish setups, I'm not interested in rolling the dice with higher timeframe bullish trades. But again, until the S&P 500 crashes through 3,900 and the Nasdaq closes decidedly beneath 11,500, we can't rule out a stick save and bounce (and likely failure) toward the 21-day exponential moving average.

My plan for trading the Invesco QQQ Trust (QQQ) and SPDR S&P 500 ETF (SPY) is simple. Assuming the two indexes open lower on Friday due to FedEx's (FDX) warning, I'll treat any push above the five- or 15-minute opening swing high as an attempt by the bulls to close the opening gap. As long as price remains above the session's volume weighted average price (VWAP), I'll try to be long. But remember, if the bulls are going to buy the opening dip, we expect a swift push above the opening swing high and relatively little success by the bears when trying to break back under the VWAP.

Look, most of the charts I look at are ugly. But this hyper-emotional market loves to torture as many people as possible. The cruelest thing the market gods could do is crash through the support levels most traders are monitoring, only to rally the troops and leave behind a long bullish candlestick wick (lower shadow). Put another way, until we crash and close beneath those levels on the S&P 500 and Nasdaq Composite, let's look for a reason to fade any FedEx-related weakness in the indexes.

Get an email alert each time I write an article for Real Money. Click the "+Follow" next to my byline to this article.
TAGS: ETFs | Index Funds | Indexes | Investing | Stocks | Technical Analysis | Trading | Transportation | Real Money | Earnings