After Monday evening's bombshell out of Walmart WMT, we knew Tuesday's equity opening would be rough. Given how the discount stores reacted when Walmart reported terrible results in mid-May, I don't think anyone expected companies such as Dollar Tree (DLTR) , Dollar General (DG) or Target (TGT) to do anything but follow Walmart lower. But the Nasdaq? The Invesco QQQ Trust (QQQ) fell by nearly 2% during Tuesday's regular session, and based on my conversation with some traders that came as a surprise.

Weakness in the Nasdaq was primarily the result of aggressive selling in many of the software stocks, in addition to what I suspect was fear over what Microsoft (MSFT) and Alphabet (GOOGL) would say when they reported earnings.

On the software side, Coinbase Global (COIN) fell more than 21%, Shopify (SHOP) slid 14% and Snowflake (SNOW) gave back around 7.25%. All three stocks closed beneath their 21-day exponential moving averages (EMAs) and 50-day simple moving averages (SMAs) and, in my view, should be placed in the penalty box by all traders, regardless of their timeframe. As hard as it is for most traders to turn their backs on the last cycle's winners, there isn't much to like in the charts of these three stocks.

As crummy a session as Tuesday was for stocks, things improved after hours thanks to positive reactions to what MSFT, GOOGL and Chipotle Mexican Grill (CMG) told Wall Street. The real tell, of course, will be whether these stocks can hang onto their after-hours gains when the regular session opens here on Wednesday morning.

I can't get too excited about Microsoft from a trading perspective until it's above $270. Even then, the stock runs into another supply wall at around $275.

As for Alphabet, I want to see the stock close above its 21-day EMA and 50-day SMA around $113 before I consider trading it. It's worth noting that the volume-weighted average price (VWAP) anchored to GOOGL's July 8 swing high also sits around $113.

There's one final earnings report we should probably discuss, and it's from Enphase Energy (ENPH) . Because anytime we're in a bear market, it is in every trader's best interest to stalk companies trading near all-time highs, as those are the companies most likely to become new market leaders. 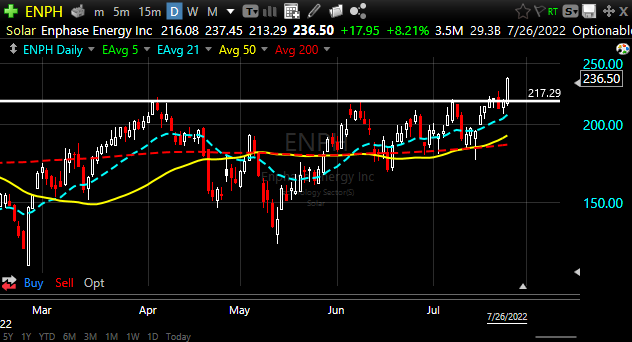 The chart above is pulled from Tuesday's after-hours data, so it's easy to see the break above multi-month resistance. The catalyst was the company's second-quarter earnings report, which easily surpassed top- and bottom-line estimates. In an ideal situation, I want to trade this stock off its first test of a rising 5-day or 8-day EMA. With the stock trading so far above the breakout point and because we're still in a bear market, I don't want to chase breakouts -- even on a chart as pretty as this one.

If you pull up this chart on your platform, you'll see that this resistance extends back to early 2021, with the stock breaking above it and running into the low $280s for a brief period in November 2021. The bottom line is as long as Enphase holds above $217, I want to look for an opportunity to get involved. But as soon as it loses the support of its short-term EMAs, like any situation, I'll head for the sidelines.

Get an email alert each time I write an article for Real Money. Click the "+Follow" next to my byline to this article.
TAGS: Earnings | Index Funds | Investing | Stocks | Software & Services | Technology | Real Money