No joke. One stock I had considered getting involved in over the last two days had been Five Below (FIVE) .

I looked at the charts overnight. Looked at them again this morning. Looked at the fundamentals. Good company, in my opinion. I tend to like the stocks of good companies that show some weakness ahead of earnings (Five Below reports on Wednesday).

Then it happened. Someone requested my public analysis for this name. Now bound by a sense of honor, I proceed with that analysis ahead of taking any potential action for my own accounts.

I once spent the better part of a week in a wilderness environment that averaged less than five degrees below. Radio silence. No fires permitted. That stunk.

Different story here. For one, this chain has been growing. Nice to see that in retail. For the third quarter, ended in November, Five Below had 745 locations in 33 states after opening 53 stores for that three month period. Second, the stores are all in the United States, meaning that while, yes, that does not offer protection from expenses associated with tariffs on imports, at least there is no currency risk at the point of sale.

For me, it becomes very difficult to judge the fundamental health of retailers based upon the usage of a quick ratio as I think it has to be understood that there is a necessity here to run with significant inventories. I believe Five Below can pay their bills for the short to medium term even if forced by unforeseen circumstances to liquidate entire inventories at fire-sale pricing.

Gross margins have remained above 32%, which is solid, while operating margins have sunk below 5%. Can we chalk that up to expansion (and trade wars)? At least in part. I am watching this line item though.

Five Below will report fiscal fourth-quarter financial results Wednesday afternoon. For the fourth quarter, industry expectations are for EPS of $1.58 on revenue of $602 million. In January, the firm had guided toward an EPS print of $1.53 to $1.57 on revenue spanning a range from $593 million to $600 million, so consensus is now above the firm's own guidance.

The very closely watched metric of same-store sales is expected to show 4.3% growth. That's robust. Looking out longer-term, projections are that Five Below will be able to maintain a revenue growth rate of about 22% through the full years 2019 and 2020.

The drawback for me is that the stock is already a bit expensive. At 38 times forward-looking earnings, the investor is obviously paying for growth uncommon in retail, and for a certain level of fundamental health. There is no dividend. I am a selfish investor. I like to see a cut of the profits.

What Do You See? 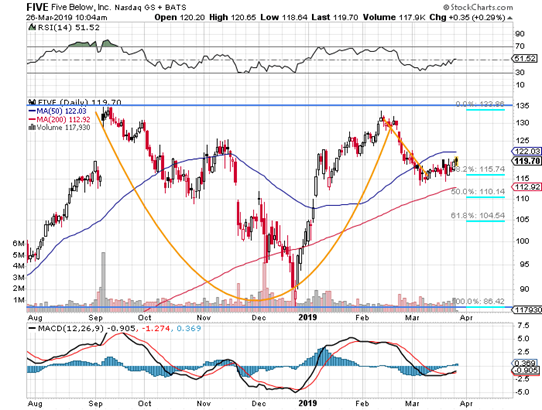 Someone else who looked at this chart saw a period of consolidation (blue horizontals) spanning from September through the present. I see a cup-and-handle (orange) formation. If I am right, FIVE would have to pop on earnings and given what happens in the low $130s (pivot), could move significantly higher from there. Is that just what I wanted to see?

FIVE certainly has found a channel of support between the 50-day and 200-day simple moving averages. The daily Moving Average Convergence Divergence (MACD) is trying to turn positive. Relative Strength is not a factor either way.

The Fib levels in the light blue show that support has appeared precisely where it was supposed to, allowing for the stock to rise off of the "handle."

I am going to buy some of these shares after you get a chance to read this. My trade will go something like this.

Get an email alert each time I write an article for Real Money. Click the "+Follow" next to my byline to this article.
TAGS: Earnings | Fundamental Analysis | Investing | Put Call | Stocks | Technical Analysis | Trading

Let's review the charts and indicators ahead of earnings.