By STEPHEN GUILFOYLE Dec 23, 2019 | 12:11 PM EST
Stocks quotes in this article: TSLA, POAHY, TM, VWAGY
I thought it was a bit odd. Sunday morning at the gym -- early, before most folks are at the gym, or even awake for that matter -- the conversation, after a fairly intense hour-long spin class, turned to holiday shopping. The class instructor, a mid-30s, family woman, mentioned how great her electric vehicle was for all of the short trips necessary this time of year, and how the gasoline related savings were starting to mount up. Everyone who had not darted out of the room after class stopped. She was not the only one present who had purchased one of these vehicles. They all -- from young adult to retired -- had an opinion. None were negative. Nobody there knows what I do for a living. I just shut my trap and listened. Determining and understanding human response is what we do here.

Tesla ( TSLA)  is on the run. Again. I have not written about Tesla recently. Why is that? You may recall that once upon a time, I was a vocal short concerning this name. Sure, I ended up one fairly high profile victory on those shorts, one that drew upon me the anger of the cult, but truth be told, there were more losses than wins among those shorts. The last two times I did trade the name, the trades, though not large, were profitable. Both were longs. For the most part, I write about my own trading and investing. When a piece I write is not specifically about one of my trades, it is usually at least centered on a name that I am considering. I had decided that clearly -- though sometimes I am average to above-average when it comes to playing this game -- that I was below average at trading Tesla. I locked the name in a box. I did not need Tesla in my life. Tesla, however, needed to get out of that box. It never goes away.

A December to Remember

Equity markets have broadly offered investors a December to remember. Tesla has offered investors that and more...  with several explanation points. This weekend, we learned that Tesla had agreed a new $1.4 billion, five-year loan facility obtained through a group of Chinese banks (the amount is in yuan, of course, 10 billion of them). It is key to remember here that Tesla broke ground nearly a year ago on a new plant in Shanghai with the stated intention of producing 1,000 Model 3 sedans a week by year's end. Beijing has been supportive of Tesla's efforts in that nation and the new loan will at least in part be used to roll over the firm's already existing 3.5 trillion yuan denominated debt.
Going further back, but not much further, forget the days when CEO Elon Musk's eccentric behavior would dominate the business section of your favorite news outlet, the share-shave soared as the firm reported surprise profitability for the third quarter, as the Porsche ( POAHY)  into the electric automobile market fell short of expectations for range in Environmental Protection Agency testing, as noted analysts tempered their negativity, and as market cap screamed past nearly every other manufacturer of automobiles on the planet save Toyota ( TM)  and Volkswagen ( VWAGY) .
For me, one really can not even try to analyze Tesla, without looking at short interest. Back when I was trying to short this name, it was not unusual for a rough 30% of the firm's entire float to be held in short positions. In late November, that percentage hovered around 20%, down from 22% in October. By all reports, given the recent action, that number must be far lower -- but I have not seen the December number as of yet. Personally, I can't imagine hanging onto a position like that through an autumn like this.
It would make perfect sense that at least part of this run, maybe even a substantial part, might be the proverbial towel hitting the canvas. That would suggest that this run might be out of gas. Am I that brave? Brave has nothing to with it. I am not that foolish -- not foolish enough to ever underestimate this company again.

Understand one thing: This chart is just about as much conjecture as anything else. If we start with the bottom in early June, we see that the shares could face a test at the central trend line of the purple Pitchfork model almost imminently. We also see, using a Fibonacci model, not for price, but for time sequencing, that our favorite 12th century mathematician seems to have nailed a few significant moves in this name this year, most notably, the top in July, the bottom in August, and the lift-off in October. 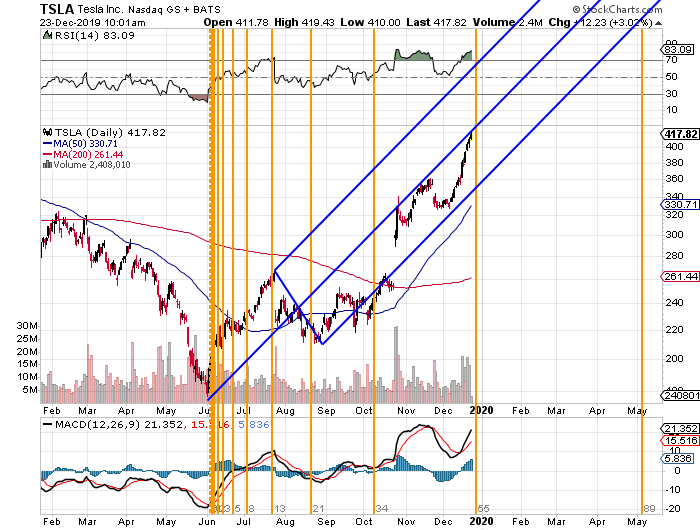 This sequencing would suggest that something wild might be imminent, and then perhaps a calm might settle in all the way into the spring. That may be asking a bit much, given that Tesla will report quarterly financial performance again in late January.

- Purchase one TSLA Jan. 24 $415 put for rough $19.75
- Sell one TSLA Jan. 24 $400 put for roughly $13.05
Net debit: $6.70. (Obviously these prices could be vastly different by time this piece hits publication.)
Note: This is an example of a bear put spread that would cost the trader a maximum of $670, in an effort to bring back a best case scenario of $1,500 in a month's time. I find that for pure equity traders, getting long the stock up here is just too dangerous. Too much of the move has been missed. Getting short the stock? Not me.
Get an email alert each time I write an article for Real Money. Click the "+Follow" next to my byline to this article.
TAGS: Luxury Cars | Investing | Stocks | Automobile Components | Automotive | China | Stock of the Day

How I Made the Best of a Bad Year

Here's a followup from my May 2020 stock picks and how they played out during the pandemic year.