By STEPHEN GUILFOYLE Dec 31, 2021 | 12:30 PM EST
Amid all of the 400 or so traditional initial public offerings -- and all the 600 or so "de-SPAC" names that went public through special purpose acquisition companies in 2021, I have a favorite.
The only thing is, my favorite IPO was not really an IPO. It was a "DPO" or "direct public offering." I'm talking about Roblox ( RBLX) , which followed the example of another "Sarge" name, Palantir ( PLTR) and allowed existing shareholders to sell existing shares immediately, nixing the traditional lockup period.
Roblox is a 3D educational game company -- a "metaverse"-type company that came out before the word metaverse became a commonly used term. Priced at $45 initially, the stock opened at the New York Stock Exchange in March, after having already raised funds privately, leaving a plethora of investment bankers at the altar.

Roblox is set to report fourth-quarter performance by early March. A consensus view of sell-side analysts covering the name is for a loss per share of $0.14 on revenue of $763 million. This revenue number, if accurate, would be up 146% from the year-ago period, which would be the fifth consecutive quarter of three figure (in percentage terms) year-over -ear sales growth. Is the stock expensive? I think so. This is a clear case of paying for growth.
The stock is trading at 40-times the 12-month's trailing sales and over 100-times book. The margin is obviously still negative. But operating and levered free cash flows are indeed positive. The balance sheet is also remarkably clean. As of the most recent quarter, the firm's cash balance stands at more than $1.9 billion, and total debt at $244 million. With net "income" a loss of $74 million for the third-quarter, this firm could, if it had to, burn cash for a while as it works toward profitability. Oh, and just an FYI, about 6% of the entire float is held in short positions. Not enough to fire up the apes, but also too big to ignore. The firm stands with a current ratio above 1.3, which is fine.

I can find four, five-star (at TipRanks) sell-side analysts with a public opinion on RBLX. There are three "buy" or buy equivalent ratings and one "hold." The price targets are all over the place, from a high of $150 (Brian Nowak of Morgan Stanley) to a low of $82 (Andrew Uerkwitz of Jefferies). The average of the four targets comes to $114.50.

I bought a trader's tranche earlier on the dip in an attempt to take advantage of what I perceived to be tax-loss related selling. The intent originally was to get rid of the position in early January as the "Santa "Claus" rally period comes to an end, and certainly before the third week of January, which is historically the start of a three-week period of darkness for the S&P 500. (You can look that up. The S&P 500, in an average year, posts negative returns for weeks three, four, and five of the new year with week five being the weakest. There are, on average, softer individual weeks than any one week of these, but this is often the softest three period of the market calendar year.) In short, I want out of these shares before then, and then if the price is right, to get back in at some point in February because I do like the name.

Readers will note that the daily Moving Average Convergence Divergence (MACD) oscillator and the Full Stochastics Oscillator are pretty darned weak right now. The stock does appear to have found support at the 61.8% Fibonacci retracement level of the entire DPO through November rally. Note that the shares never traded publicly at the $45 DPO price. 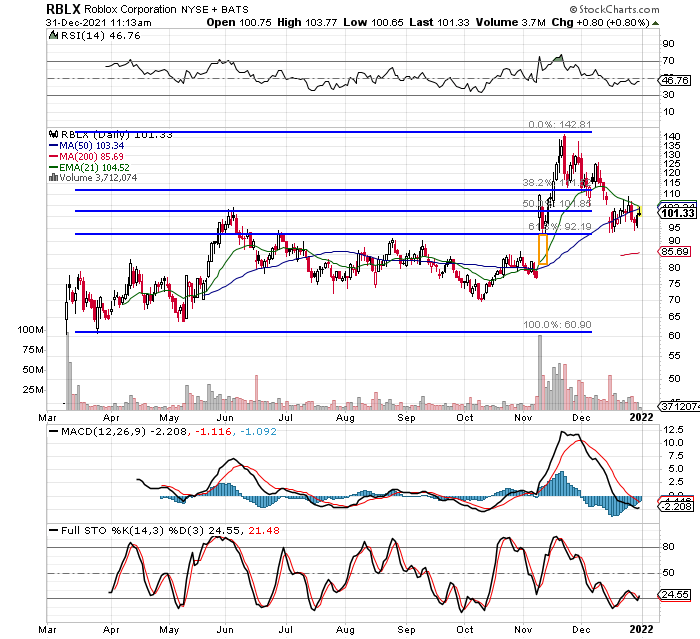 I do think, however, that we need to keep in mind the unfilled gap between $79 and $94 created early that month. The very top of that gap had filled only slightly prior to the Fibonacci support kicking. My thought is that this area may fill during that three weeks of darkness that still allows for an earnings inspired rally after that. I know: a lot of moving pieces. Maybe I'm playing chess when I only need to play checkers. That said, chess is a whole lot more fun than checkers, and mapping out what the algorithms will do before they do it is what makes us better than them. Go humans.
Get an email alert each time I write an article for Real Money. Click the "+Follow" next to my byline to this article.
TAGS: Education | IPOs | Investing | Stocks | Technology | Video Games