Duck, Duck, Goose. Well, the stock may have been goosed, but a better headline might read... Beat, Beat, Raise. Palo Alto Networks (PANW) reported the firm's fiscal third quarter performance on Thursday evening. The firm posted adjusted EPS of $1.38, comfortably beating estimates on revenue generation of $1.07 billion, also a beat. That was for folks doing the math, 18% earnings growth on 23% revenue growth.

Digging in a little bit, Product based revenue saw a slight (+2.8%) increase to nearly $289 million, while revenue based upon Subscriptions and Support explode 34.3% higher to $785 million. Billings landed at $1.3 billion, up 27% from a year ago, and up from 24% growth last quarter. Deferred revenue is also growing like a weed, up 30% to $4.4 billion.

From the firm's press release, CEO Nikesh Arora said: "The work-from-home shift earlier in the year and recent cybersecurity issues have increased the focus on security. Couped with good execution, this has driven great strength across our business, with Q3 billings growth accelerating to 27% year over year. In particular, we saw a number of customers make large commitments to Palo Alto Networks across our three major platforms. We are pleased to be raising our guidance for fiscal year 2021 as we see these trends contributing into our fiscal fourth quarter, bolstering our confidence in our pipeline."

I have seen four analysts rated at 5-stars by TipRanks react to these earnings. I have seen several more analysts that react, and the reception is truly positive. Only four five stars though. Among those, we have three "Buy" (or their firm's equivalent) ratings with an average target price of $436. These three are household names... Nehal Chokshi of Northland, Brent Thill of Jefferies, and Dan Ives of Wedbush. Now, Sterling Auty of JP Morgan maintained an "Underweight" rating which we interpret as a "sell", but Auty did increase his target price from $317 to $350.

So, I looked for whatever it was that I could find that a highly rated analyst not in the position of having to make a name for him or herself stick out like a sore thumb. It's not like the balance sheet is messy, but that is where I did find some line entries that did not thrill me. I noticed that the firm's cash balance has dropped from more than $2.9 billion to less than $1.9 billion since July 31, 2020, thus dropping current assets from more than $5.1 billion to more than $4.1 billion. Where is this decline made up? The entry for Goodwill climbs over the same time frame from more than $1.8 billion to more than $2.7 billion. Total assets (and total liabilities) add up to $9.562 billion. Goodwill is more than 28% of total assets. We never like to see that.

This pairs against a rough $400 million in deferred revenue which is certainly not a negative and slight increases in Convertible senior notes and "Long-term" deferred revenue. It's not like the firm is in any kind of trouble, and I am not inferring that there is trouble on the horizon. I am old school. Generally, goodwill is an intangible asset based on things like the value of a brand name, reputation in customer relations, and the value of that customer base, as well as internal employee relations. Goodwill is a real asset, but should not fluctuate wildly. I like to see cash, and an ability to meet all short to medium term obligations. Palo Alto has struggled to keep the firm's current and quick ratios close to 1.0, which is important to us old school fundamental analysts. 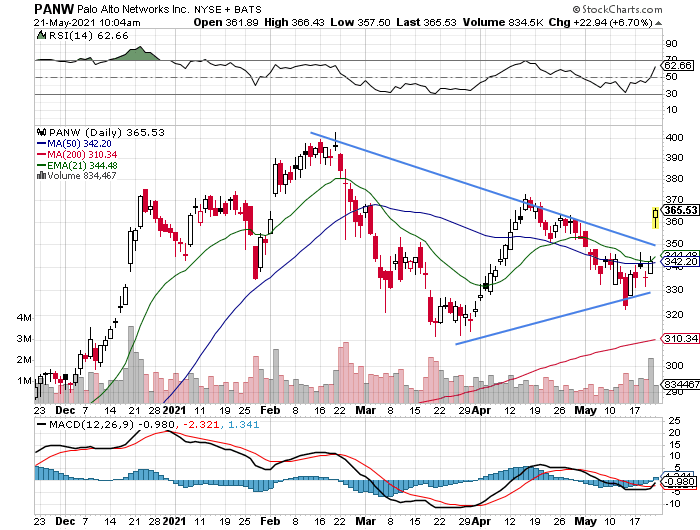 With a gap up opening like that, despite the fact that this was a very good quarter, I would be more inclined to short the shares small for an intraday trade than to invest after missing a 7% pop like this. Investors beware, Zscaler (ZS) reports this coming Tuesday. Zscaler is trading higher today on these PANW earnings, although ZS is a smaller business and has underperformed PANW really since the start of March. ZS also just happens to be my favorite name in the space. I think I day-trade the PANW today, and add to my ZS long position (small) looking for similar messaging from them on Tuesday. Just a thought.

Get an email alert each time I write an article for Real Money. Click the "+Follow" next to my byline to this article.
TAGS: Earnings | Investing | Stocks | Technical Analysis | Trading | Cybersecurity | Analyst Actions