It's always like that isn't it? I go on vacation and the market gets wild and volatile. The most interesting part is that Nasdaq is actually 10 points higher than when I left on vacation. The same cannot be said for the other indexes, but growth and tech stocks held their own. For now.

So are we oversold? I have only one measure that says we've stepped a toe into short-term oversold territory. That is what it will take to turn the McClellan Summation Index from the current down to up. This indicator shows what the majority of stocks are doing, so in this case, they are heading down. Right now it will take net breadth (advancers minus decliners) on the New York Stock Exchange positive 3,300 to stop the decline (and obviously more to turn it upward). At positive 2,000 the market has stepped a toe into oversold territory. At positive 4,000 we start to look at it being at an extreme. Notice at the May low (the prior blue spike) it was a smidge, higher (meaning a bit more oversold than now).

My own NYSE Oscillator is heading into oversold territory as well. But because this is based on the 10-day moving average of net breadth, the timing says it could be another week before a short-term oversold condition will develop. Let's split the difference and say despite the late week decline we're not currently at a great short-term oversold reading. Yet. It could show up this week.

Now look at Nasdaq's Oscillator. It is nowhere near an oversold condition. All it's done is get to the zero-line. If there had been real panic in the market last week we would have seen 90% of the volume on the downside (we did not) and the beloved growth/tech stocks would have been sold (they were not)

Now let's talk about sentiment. Prior to my departure, we discussed how complacent sentiment was. One of the indicators we looked at was the 10-day moving average of the put/call ratio and how low it was. I noted that I expected it would turn upward in my absence and so it has. Last week we had not one, but two readings over .90, which are the highest such readings since May. Back in May we had six straight days of readings over .90, with two readings at triple digits or more. Now we have two readings and they weren't even on consecutive days. Thus the 10-day moving average has perked up, but at .77 it doesn't say we're at an extreme in sentiment. Not yet.

Then there is the National Association of Active Investment Managers (NAAIM) and their Exposure Index. This has been quite a good tell for growth stocks. It's therefore also been a good tell for the indexes in general since those mega-cap tech/growth stocks are what move the major indexes around. Back at the May low, these folks had their exposure to the market at 44, which was the lowest since the spring of 2020. It was my contention that this meant their exposure to growth and tech was low and it was one of the reasons I thought that area should rally. The either/or market has not gone away. Now we find these folks have upped their exposure to 98.5. In the past readings in that 100 area have been a reason to look for a pullback in the market.

Keep in mind this is tallied up on Wednesday morning and released on Thursday, so aside from the put/call ratio it's one of the freshest reading we have for sentiment. My guess is exposure will not increase this coming week, but does it matter? What matters is they need to feel scared enough to reduce exposure for us to feel sentiment has shifted away from complacency. 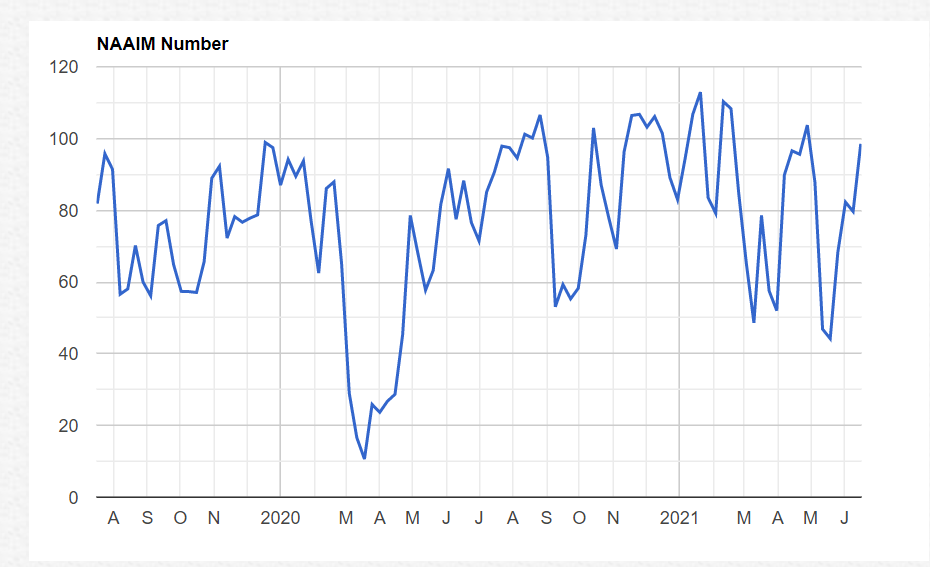 My weekend Twitter poll did show a shift in sentiment, the first in a month, with 43% looking for upside and 57% looking for downside. That's one sign that sentiment has shifted.

In sum, I suspect one day this week we get short-term oversold enough to bounce, but it's going to take a while to cycle the indicators back to an oversold condition (short term and intermediate term) that is coupled with too-bearish sentiment. Even if we bounce this week the set up seems to me that there is more work to be done.