You might recall how gloomy my weekend Twitter poll was when such a large percentage were looking for the next 100 points in the S&P to be down.

The results are in and I thank you all for voting!
Folks seem a bit cautious this week. pic.twitter.com/6HMqiWuudw

That was one reason I thought we'd rally on Monday, but alas I was wrong, because the rally arrived on Tuesday.

But it is interesting that folks seemed so gloomy on the weekend and then Tuesday arrived, and everyone is so excited. So much so that someone pointed out to me -- or shall I say someone said to me -- that stocks had only known one direction in the last year and that was up. Of course, I see so many stocks down double-digit percentages and wondered if this person really meant the indexes.

So, I took a look at an indicator I typically don't look at. The percentage of stocks trading over their moving average lines. I used 200 days and 50 days. Keep in mind that I rarely look at these, so I was quite surprised to see on a year-to-date basis, we had 88% of the stocks on the New York Stock Exchange over their 200-day moving average line back in January and in February, too. But now that is down to 72%. The low reading thus far was 68% in mid-July.

So, then I thought surely the percentage of stocks trading over their 50-day moving average lines will look more sideways, but I was wrong. That, too, peaked back in January at around 85%. It hit a low in mid-July near 25% and is now at 47%.

Now take a look at the Overbought/Oversold Oscillators that I keep, both using breadth in the market. Both had that big plunge in mid-July, to an extreme low and both lower than at any point in the last year.

Now take a look at the number of stocks making new lows for Nasdaq where we can see that big spike to 260 at that July low. 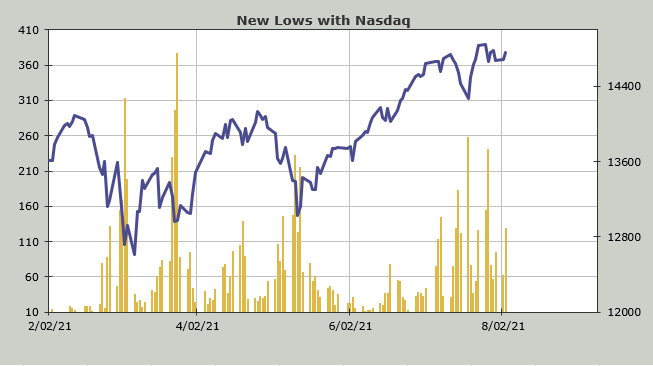 It is as yet unclear whether those July readings will be the lows for this year; they sure look extreme. Notice Nasdaq's new lows are on the rise again: Many more on Tuesday than on Monday, and are now back over 100.

Either way, one thing is for sure, these moving average charts tell us that, no, the majority of stocks have not been one-way streets to the upside. Some might even say the majority peaked in January and have been trending lower ever since.

I think sentiment was more bullish on Tuesday than Monday, but it was nowhere near as enthusiastic as it was last Thursday. Now we have the Daily Sentiment Index (DSI) for the bonds at 88, which means if bonds don't trade down in the next few days they will head into the employment number on Friday with the DSI at an extreme.

Then there is Nasdaq that also has a DSI of 88, making its runway short once again. So the chopfest continues.