Newlands said he's still extremely bullish on the outlook for Constellation and wary investors need to be reminded of how good of a year the company just had under the circumstances.

Turning to the topic of cannabis, Newlands noted that America is closer to legalization than it was a year ago and no one is in a better position to capitalize on when it happens. He said his company's stake in Canopy Growth (CGC) remains a good one.

We looked at the charts of STZ recently on April 5 and wrote that: "The charts of STZ are mixed with a downside price target on the daily Point and Figure chart but a bullish target on the weekly close only chart. I would stand aside from a trade and wait for further clarity." Our previous long idea was stopped out at $215 in early March.

In the updated daily bar chart of STZ, below, we can see the shares gapped below the 50-day moving average line Thursday on heavy turnover. The On-Balance-Volume (OBV) line shows a quick turn lower and the Moving Average Convergence Divergence (MACD) oscillator made another cross to the downside.

In this weekly Japanese candlestick chart of STZ, below, we see some bearish clues we did not notice earlier. In early February there is a bearish engulfing pattern to mark the high. Prices are still above the rising 40-week moving average line but the weekly OBV line shows the start of a move down and the MACD oscillator shows weakness the past two months.

In this daily Point and Figure chart of STZ, below, we can see the recent decline and a potential downside price target in the $177 area. Prices may not decline that much but the chart needs a rally to $239 or higher to improve the picture. 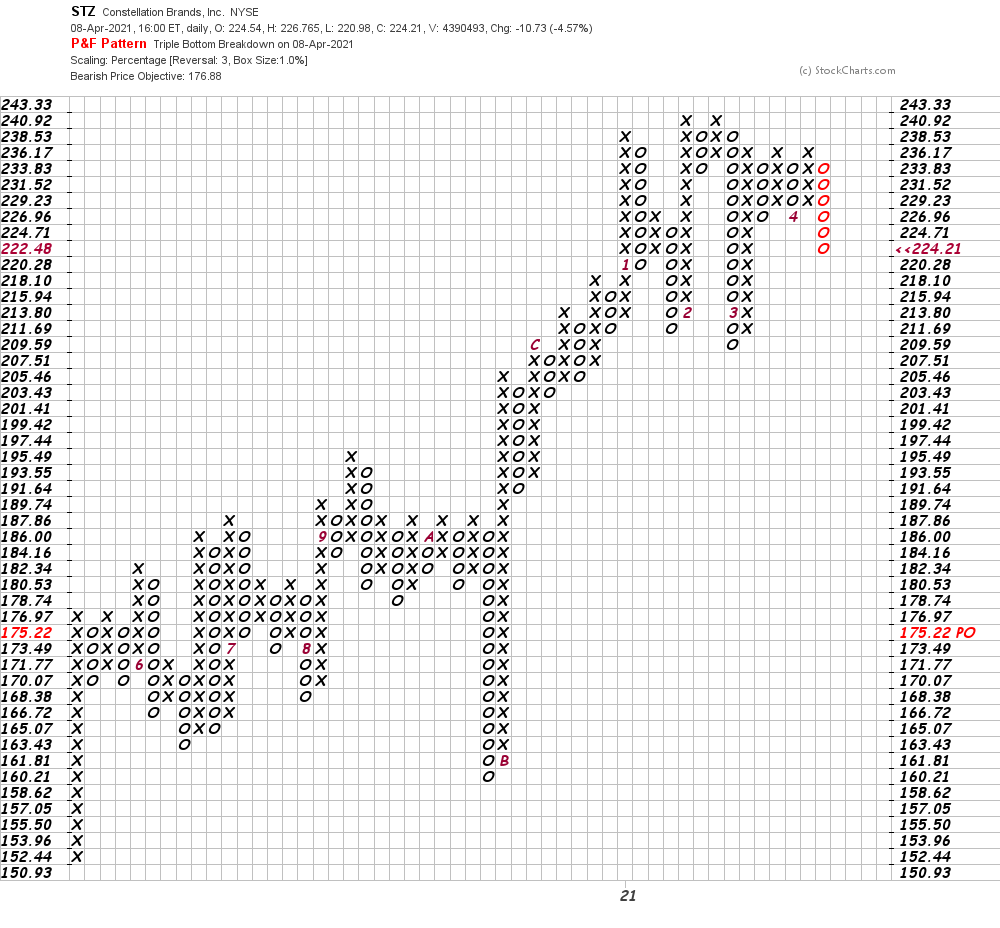 Bottom-line strategy: Thursday's downside price gap will keep me on the sidelines a bit longer.

Get an email alert each time I write an article for Real Money. Click the "+Follow" next to my byline to this article.
TAGS: Earnings | Investing | Stocks | Technical Analysis | Beverages | Mad Money | Executive Interview | Cannabis