During Friday's Mad Money program, Jim Cramer told viewers his game plan for this busy earnings and election week. Cramer said we'll hear about earnings from Humana (HUM) on Tuesday, along with industrial giants Eaton (ETN) and Emerson (EMR) . While Cramer said he'd be buying Humana on any weakness, he's most curious about what Eaton and Emerson say about the strength in their end markets.

Let's check out the charts of HUM.

In the daily bar chart of HUM, below, we can see a less-than-robust picture. Te shares sold off sharply in February and March but by late May they were at a new high. HUM has saw-toothed higher from May but the pullbacks along the way seem to be taking a toll. Prices have closed below the cresting 50-day moving average line. The 200-day moving average line is not far below the price action and it is beginning to crest.

The On-Balance-Volume (OBV) line shows a peak in early September and a subsequent decline. The OBV line made a lower high in October even though prices made a higher high. This is a small bearish divergence but should not be ignored.

The Moving Average Convergence Divergence (MACD) oscillator is just slightly above the zero line and could move to a sell signal soon.

In the weekly bar chart of HUM, below, we can see a mixed picture. The shares are trading above the rising 40-week moving average line.
The weekly OBV line is still grinding higher, which is positive but just not super bullish. The MACD oscillator has been weakening all year even though prices have moved higher -- this is a bearish divergence.

In this daily Point and Figure chart of HUM, below, we can see a potential downside price target in the $343 area. 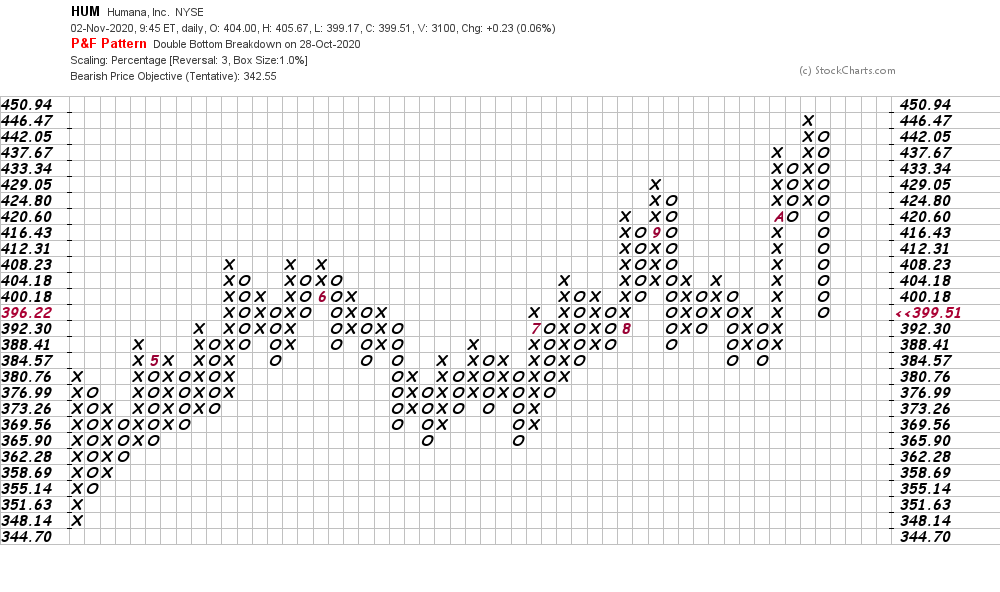 Bottom-line strategy: With a mixed set of charts, above, I would not recommend a much long exposure to HUM ahead of earnings.
Get an email alert each time I write an article for Real Money. Click the "+Follow" next to my byline to this article.
TAGS: Investing | Stocks | Technical Analysis | Healthcare | Mad Money | Earnings Preview