In his "No-Huddle Offense" segment of Mad Money Wednesday night and his Real Money column, Jim Cramer pondered when the market will stop punishing the cloud stocks. He said stocks such as HubSpot Inc. (HUBS) had been among the market darlings, but on Wednesday the stock plunged 4.2% on good earnings. Cramer said most investors have probably never heard of HubSpot, which raises the question, why do you need this stock in your portfolio?

The problem is that for many momentum investors, it's simply too easy to sell HubSpot and move into any number of its rivals, of which there are many. That's why when HubSpot blamed poor execution for their weaker-than-expected guidance, investors headed for the exits.

Let's check out the charts and see if we want to head for the exits, too.

Trading volume has increased since September telling us that traders are voting with their feet and the On-Balance-Volume (OBV) line turned lower from June, which suggests that sellers became more aggressive into the August peak.

In the weekly bar chart of HUBS, below, we can see a bearish setup with prices below the cresting 40-week moving average line. The weekly OBV line has been weakening from August and the MACD oscillator is firmly on the bear side of the zero line.

In this Point and Figure chart of HUBS, below, we can see that a downside price target of $115 is being projected. 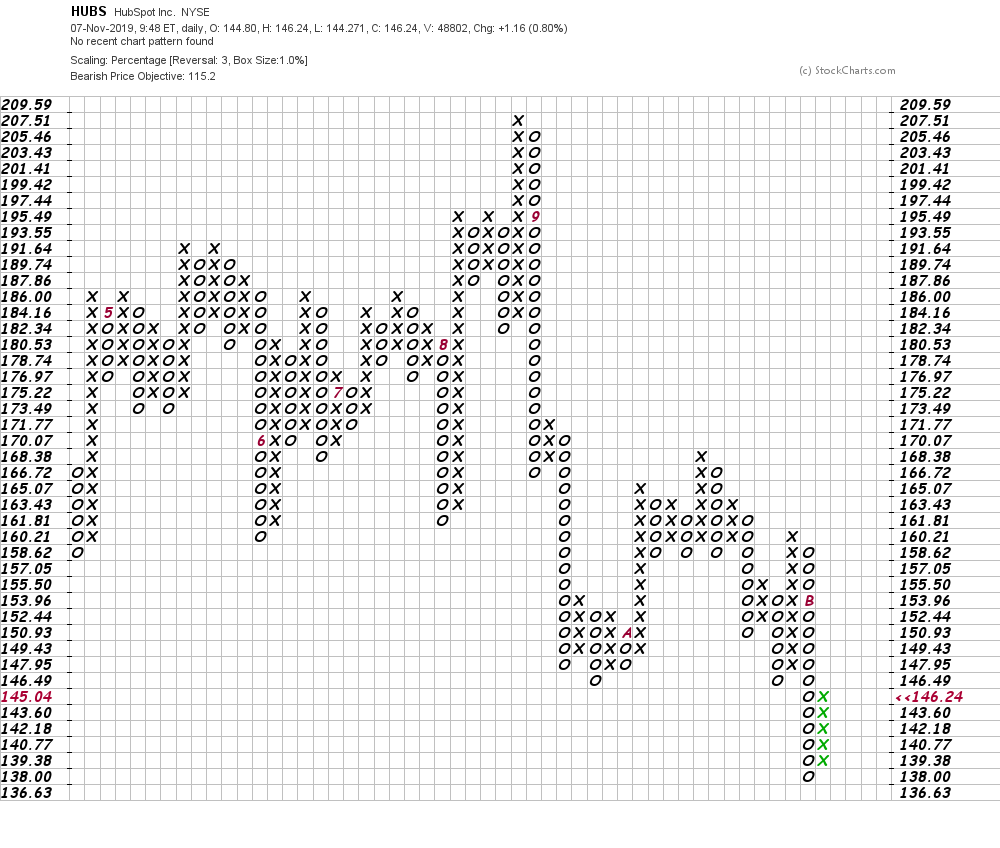 Bottom-line strategy: HUBS could make a short-term bounce but the overall condition of the charts and indicators suggests that further declines to the $115 area lie ahead. Avoid the long side.

Get an email alert each time I write an article for Real Money. Click the "+Follow" next to my byline to this article.
TAGS: Investing | Stocks | Technical Analysis | Software & Services | Mad Money