In his first Executive Decision segment of "Mad Money" Wednesday, Jim Cramer spoke with Enrique Lores, president and CEO of HP Inc. (HPQ) , the PC and printer maker that just posted a second-quarter earnings beat despite an 11% decline in revenue.

Lores said it was a challenging quarter, but his team performed extremely well through the crisis. HP's factories in China have reopened and are almost operating at full capacity and demand for PCs and printers in China is rising.

Here in the U.S., HP saw strong demand for notebooks across the board as people set up home offices and students moved to distance learning. Lores said the work-from-home trend is likely here to stay in many industries.

Lores was also bullish on HP's 3D printing business. He said this crisis created a need for items such as face shields and respirator parts.

Let's check out some one-dimensional charts and indicators.

In this daily bar chart of HPQ, below, we can see that prices were just about cut in half from late February to the middle of March. HPQ rallied in late March as the broad market recovered, but then prices zigzagged lower into May for what looks like a successful retest of the March nadir. HPQ is now above the rising 50-day moving average line but still below the declining 200-day line.

The On-Balance-Volume (OBV) line shows a rise from September, but the rise from early April is more interesting as prices declined but buyers were more aggressive. I can only assume that buyers bought on a scale down into the May low. The trend-following Moving Average Convergence Divergence (MACD) oscillator crossed above the zero line just the other day for an outright buy signal.

In this weekly bar chart of HPQ, below, we see some interesting signals and clues. Prices have been in downtrend from around the middle of 2018. Prices are below the declining 40-week moving average line. The weekly OBV line has been in an uptrend the past three years and tells us a much different story, namely one of long-term accumulation. The MACD oscillator has spent much of its time since early 2019 below the zero line but it is now poised for a cover shorts buy signal.

In this Point and Figure chart of HPQ, below, we used daily price data to construct the X's and O's. The software sees accumulation and has generated a potential upside price target of $24-$25. 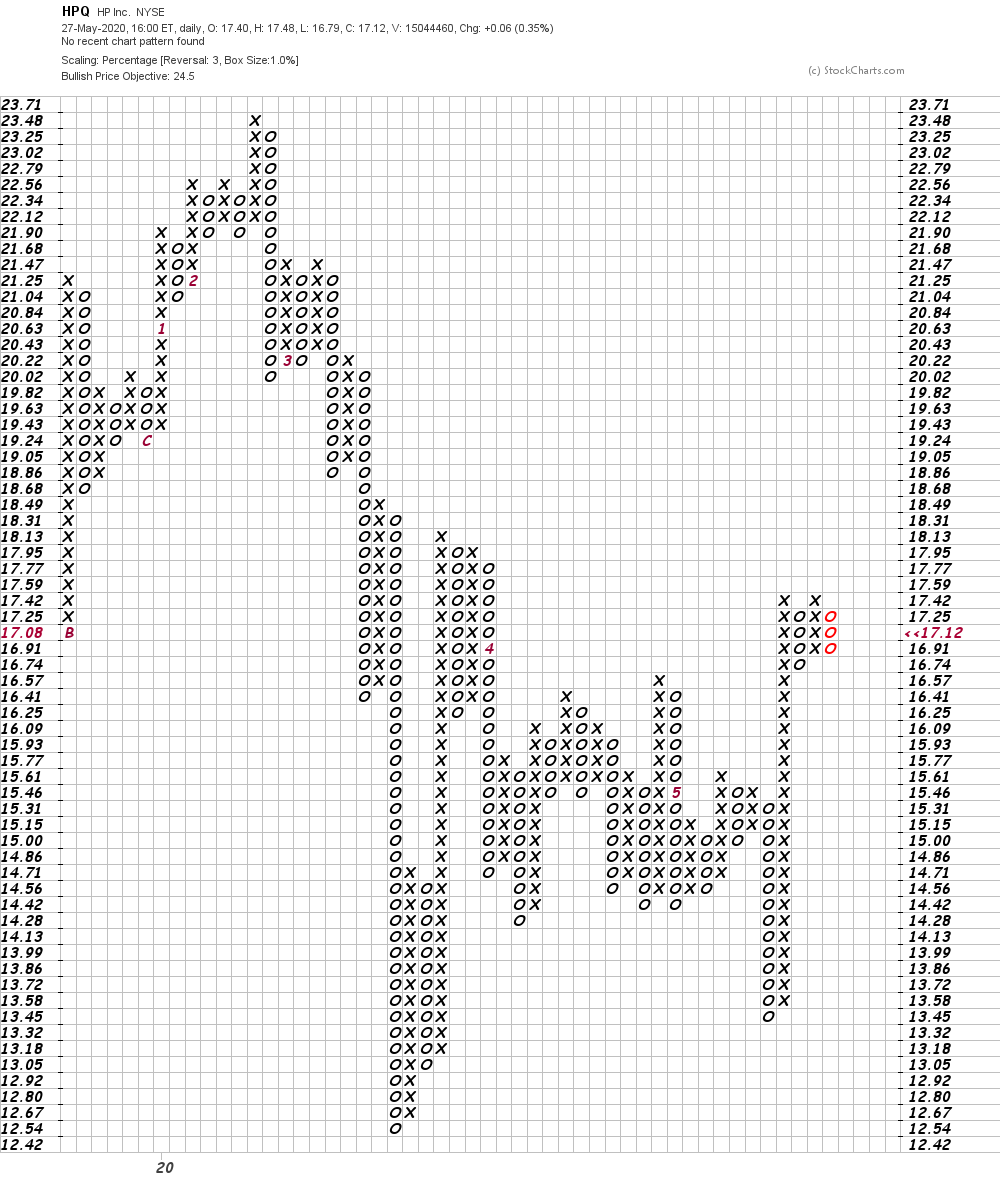 Bottom line strategy: Aggressive traders could go long HPQ at current levels risking a close below $15 for now. The $25 area is our longer-term price objective.

Get an email alert each time I write an article for Real Money. Click the "+Follow" next to my byline to this article.
TAGS: Earnings | Investing | Stocks | Technical Analysis | Consumer | Technology | Technology Hardware & Equipment | Mad Money | Executive Interview

Taking a Wait and Watch Strategy on Biohaven Pharmaceutical

BHVN has made a relatively big advance since April and a period of consolidation or sideways price action is probably likely at this time.