HP Inc. (HPQ) announced a major restructuring that will include the elimination of 7,000-9,000 jobs from its workforce of 55,000 over the next three years, which the company says ultimately will save money. However, in the short term the restructuring will impact the company's bottom line.

HPQ is our Stock of the Day here at Real Money. Let's check out the charts and indicators.

In the daily bar chart of HPQ, below, we can see that prices have been in a downtrend the past 12 months. The slopes of both the 50-day simple moving average line and the 200-day moving average line are negative or bearish and the price of HPQ is below both averages.
Trading volume looks like it has been heavier over the past two months than in previous months and this could suggest a shift in ownership from weak hands to stronger hands or it just might mean there has been more distribution. The daily On-Balance-Volume (OBV) line has not moved up, however, and that suggests the increased volume has not been led by aggressive buying.
The Moving Average Convergence Divergence (MACD) oscillator is still below the zero line in bearish territory.

In the weekly bar chart of HPQ, below, we can see that prices are trading below the declining 40-week moving average line.
The weekly OBV line is pointed down and the MACD oscillator on this longer-time frame is bearish. This is not the pattern we would look for at a bottom.

In this Point and Figure chart of HPQ, below, we can see a possible downside price objective or target of $15.50 or so. 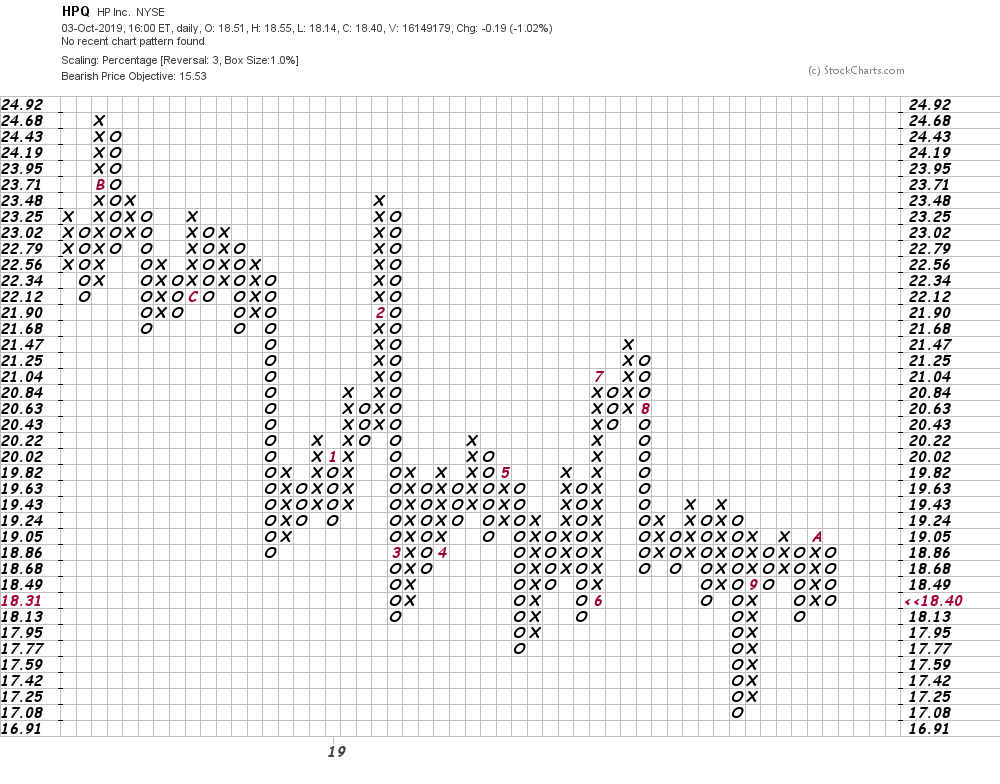 Bottom-line strategy: Unless we see a reversal to the upside it looks like HPQ is headed lower on the charts to the $15.50-$15.00 area where it is likely to find some chart support. Defer purchases.
Get an email alert each time I write an article for Real Money. Click the "+Follow" next to my byline to this article.
TAGS: Investing | Stocks | Technical Analysis | Software & Services | Technology | Technology Hardware & Equipment | Stock of the Day