Singh said the increase in pet adoption is not just a pandemic event. Chewy works with over 6,000 pet shelters across the nation that report adoptions are still growing by double digits.

When asked about their continued success, Singh noted that 69% of Chewy's volume stems from their auto-ship subscription programs. The company is also working hard to reduce the barriers to attaining quality pet health visits and medications to ensure that all pets lead long, healthy lives.

Let's check out the charts and indicators for Chewy, which TheStreet's Quant Ratings service just initiated with a "Sell" rating.

In the daily bar chart of CHWY, below, we can see that the shares topped out back in January and February and then corrected lower into May. Prices have stayed below the rising 200-day moving for about five weeks and the underside of the average line appears to be acting as resistance. The $80-$90 area acted as support on the decline and it could reverse roles and act as resistance now.

The daily On-Balance-Volume (OBV) line has been stalled since December. The Moving Average Convergence Divergence (MACD) oscillator has been below the zero line since early March so a new buy signal might not be influential.

In the weekly Japanese candlestick chart of CHWY, below, we can see that prices have returned to the underside of the cresting 40-week moving average line.

The weekly OBV line has been in a sideways pattern the past five months. The MACD oscillator is below the zero line but narrowing toward an eventual cover shorts buy signal.

In this daily Point and Figure chart of CHWY, below, we can see a potential upside price target of $86. This suggests that CHWY will not break through the overhead resistance in the $80-$90 area. 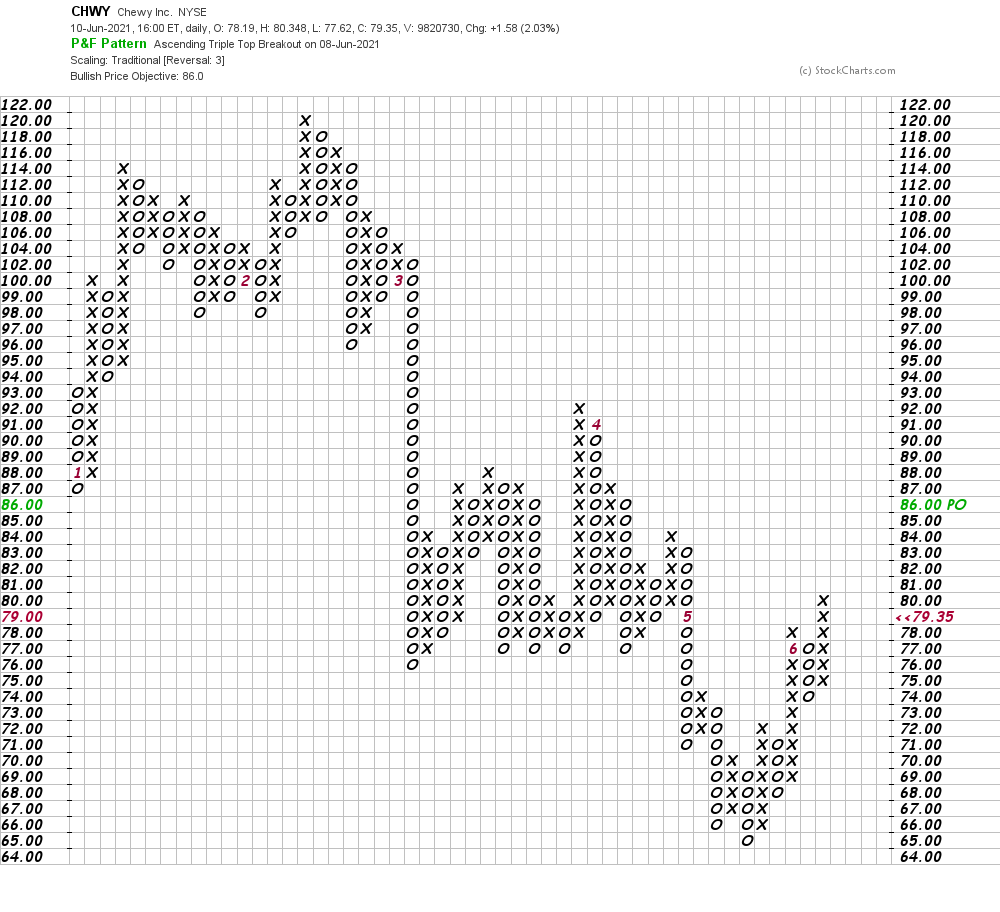 Bottom-line strategy: Traders may find that adopting a pet will give you more satisfaction than going long CHWY. I only see a minor bounce to the upside.

Get an email alert each time I write an article for Real Money. Click the "+Follow" next to my byline to this article.
TAGS: Investing | Stocks | Technical Analysis | Pets | Mad Money | Executive Interview | Consumer Products