Now that we've put the short-term Apple (AAPL) catalysts to bed, we can start pouring through the week-by-week analyst reports contradicting each other in terms of iPhone sales projections based on the crowds in three stores, the online searches, and some cryptic comment from an exec at one of the companies that supplies a small part of a portion of Apple products.

And you thought the hard part was done?

Longbow Research sees a strong interest in the iPhone 11 based on internet search trends. From a personal perspective, I will say my entire family did take a look at the new phones and watches. Then, my twin daughters and their friends kept searching for the pea-green, baby vomit phone to show everyone how ugly it was. I've watched them do the same search a dozen times. Not sure how that plays into trends, but I'm always hesitant on broad internet search.

Companies such as Etsy (ETSY) and Pinterest (PINS) can often make a direct correlation between searches on their sites and ultimate purchases, Etsy far easier than Pinterest, but if I'm trying to extrapolate searches on Baidu (BIDU) or Google (GOOGL) or Bing this early in the game, I'm less inclined to put much weight on it. People search what is hot and what is new, especially from a company like Apple, but it is possible it is also just curiosity or the want to be able to participate in pop culture conversation that is bound to come from the new product announcement.

Furthermore, Bank of America notes ship dates were extended about a week versus previous releases. More demand or less supply? That's the big question. The first would be good while the second not so much.

Given the tariff issues, I worry we are dealing more with the less supply as supply companies focus on work-arounds to maintain profit margins. This is a situation where we'll have to try to decipher those aforementioned cryptic messages to get a feel for Apple sales.

I still believe wearables and streaming are the future to focus upon. Although, we didn't buy new phones, my wife did pick up a new Apple Watch this morning (early birthday present). I'll be interested to hear how she feels about it compared to her previous one. Streaming I covered earlier, but I think Apple has a lot of ground to make up compared to Disney (DIS) and Netflix (NFLX) . 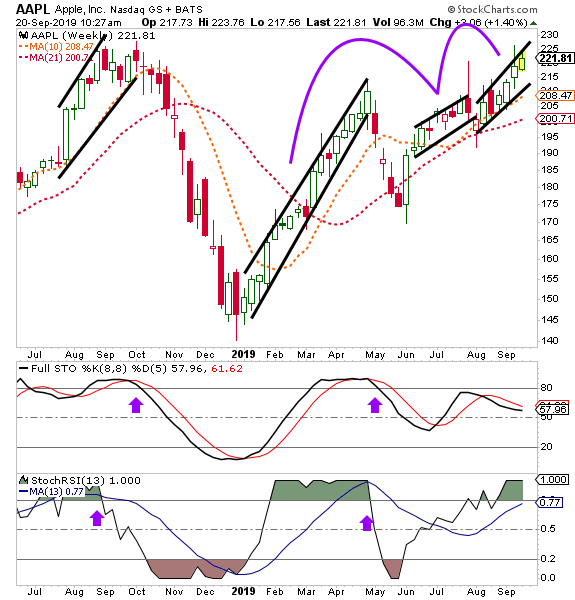 Even if you aren't a believer in the new initiatives or have hesitations about the new phones, there's nothing on the chart that screams "sell." Heck, nothing even hints "sell."

In short, run a trailing stop with the support level of the current channel ($215) or sell/hedge when there is a bearish crossover in the secondary indicators. Keep it simple because nothing about the analysis of the underlying business will be.

Get an email alert each time I write an article for Real Money. Click the "+Follow" next to my byline to this article.
TAGS: Investing | Stocks | Technical Analysis | Trading | Stock of the Day

A Bond Market Trapped Between a Variant and a Hawk