When the music stops, it is time to get off. That's what we're seeing with most of the short-squeezes.

Oh, every so often you get the exception that holds its squeeze. GameStop (GME) is a prime example with AMC Entertainment (AMC) not far behind.

Calling a top is extremely different and I'm not a proponent of shorting these names but when you're chasing or riding, you need to have an idea of when or where you are going to sell.

Most folks will say that will never happen to them. It does. Way too often.

We get stuck with the idea that as soon as we sell the stock it is going to turn around and blastoff again. Every so often it will. Most of the time, it doesn't. Even the times we do see it happen, often there is still time to reenter and catch a good amount of upside.

Let's look at two names that have already pulled back a good amount, along with one that went into squeeze mode Thursday.

This name was a huge winner for a lot of people. Judging by Twitter, everyone was a winner. The stock shot up from the low single digits all the way to $60 per share. That's an amazing run even if you caught half of it, but the end did come with a big warning signal.

It becomes clear on the candlestick daily chart, below. Traders can see a big wick to the upside. That means the stock touched those levels intraday but closed well below them. 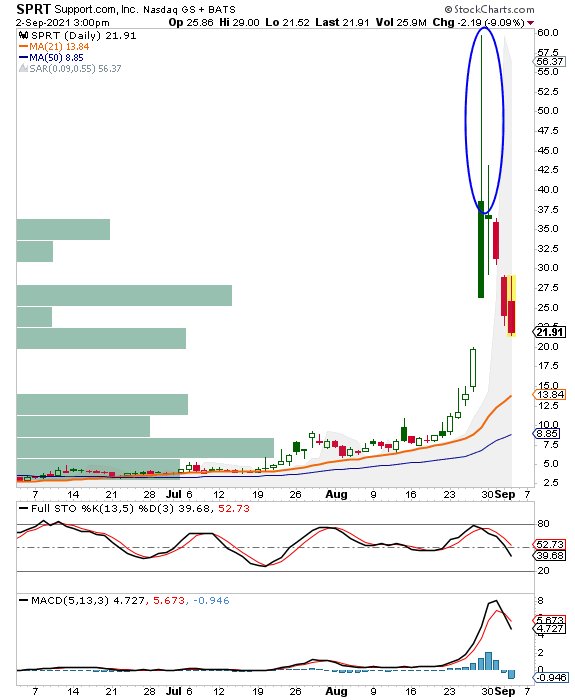 One might ask, "What about the wick back on August 24th?" And that's a great question. The wick in and of itself is a flag, but what happens the next two days is the kicker.

Back in August, the next day after the wick, the shares gapped higher and remained strong. This time around, the shares probed both higher and lower the next day, forming a doji. This is often the size of a pending change in movement. That was another flag.

When it opened lower on day 3 and trending down, it was time to exit. Now, if the stock pushed back through $38, you could always buy back in and play the momentum, but the signs were there that the squeeze ended.

This one hasn't yet moved to the levels of SPRT insanity, but it's still a move from $3 to $12. BBIG, too, had an upper wick, but it wasn't nearly as pronounced as SPRT's. 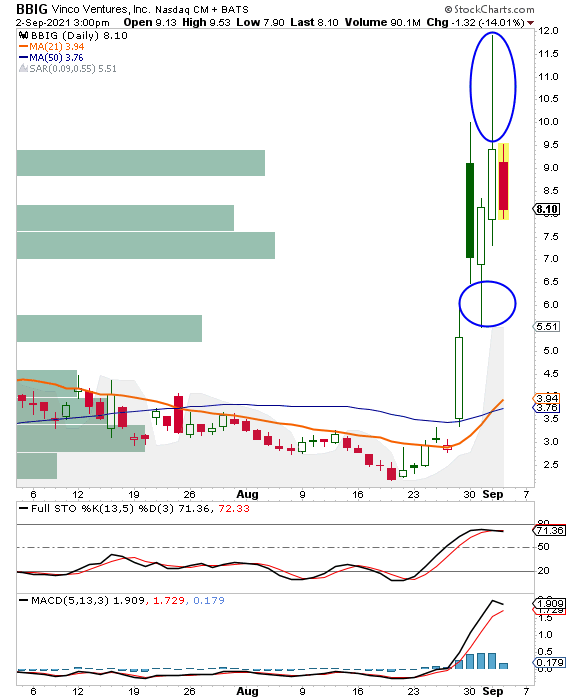 The first big move before the end of August had a wick, but it gapped higher the next day. As we saw above that gap higher negates a lot of the concerns of the previous day's wick. So, day 2 continued with the gap up, wicks on both sides, but a wide range. Again, no real flags.

Day 3 actually saw the wick go in the opposite direction. That rejection from selling down provided hints that staying with the stock another day or two was likely worth the risk.

It's that fourth day when the first flag came out. And the fourth day flag exists because we opened lower on day 5 and failed to rally. This means the pressure is on the bulls in a big way Friday.

While higher for a week now, Thursday was the first big breakout for ANY. We did get a fade on this one in the afternoon, so there's another pesky exhaustion wick. That being said, it's going to be how the stock opens Friday and trades in the early going that determines if this wick is the flag that should make you a seller on Friday. 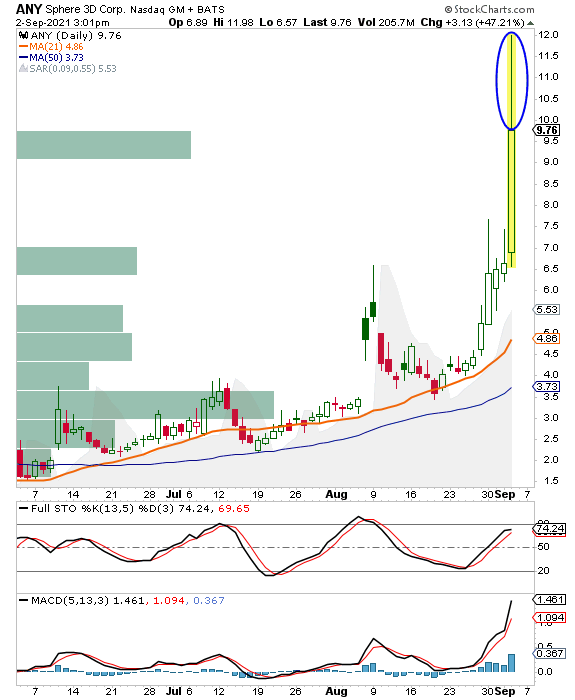 These won't always trade exactly the same, but the pattern concept is pretty repeatable across most squeeze plays. Stay safe out there!

Get an email alert each time I write an article for Real Money. Click the "+Follow" next to my byline to this article.
TAGS: Short-selling | Investing | Stocks | Technical Analysis | Trading