"I'm a total believer in the technology. I think this is a decent level to buy," Jim Cramer told a caller asking about NovoCure (NVCR) during the Lightning Round segment of Mad Money Tuesday night.

We looked at NVCR on October 5 and wrote that, "NVCR rebased from March to July before launching its current advance. The $150 area is a big number and an upside price target from a bar chart. The $344 area is a longer-term Point and Figure target. Aggressive traders could go long NVCR at current levels, risking a close below $100 for now. The $150 area is our first target."

Let's check out the charts and indicators again to see what has changed in the past month.

In the daily Japanese candlestick chart of NVCR, below, we can see that the shares corrected lower after our October 5 buy recommendation but with our stop recommendation a close below $100 we would still be long. Tuesday's candle pattern looks like a hammer bottom pattern and a successful test of the rising 50-day moving average line. A bullish candle pattern Wednesday would confirm the hammer and define a bottom reversal.

The On-Balance-Volume (OBV) line shows only a shallow decline from the middle of October into early November. The Moving Average Convergence Divergence (MACD) oscillator is pointed down towards the zero line but it has narrowed in recent days and could actually cross to the upside in the days ahead.

In the weekly candlestick chart of NVCR, below, we see a mixed picture. Prices made a strong rally and a pullback with a possible hammer reversal with two more days in the week. Prices are above the rising 40-week moving average line.
The weekly OBV line shows a dip in October and the MACD oscillator is still bullish but has narrowed in recent weeks.

In this daily Point and Figure chart of NVCR, below, we can see a potential downside price target of around $91 but we can also see a band of potential support from$110 to $100 that could attract buyers. 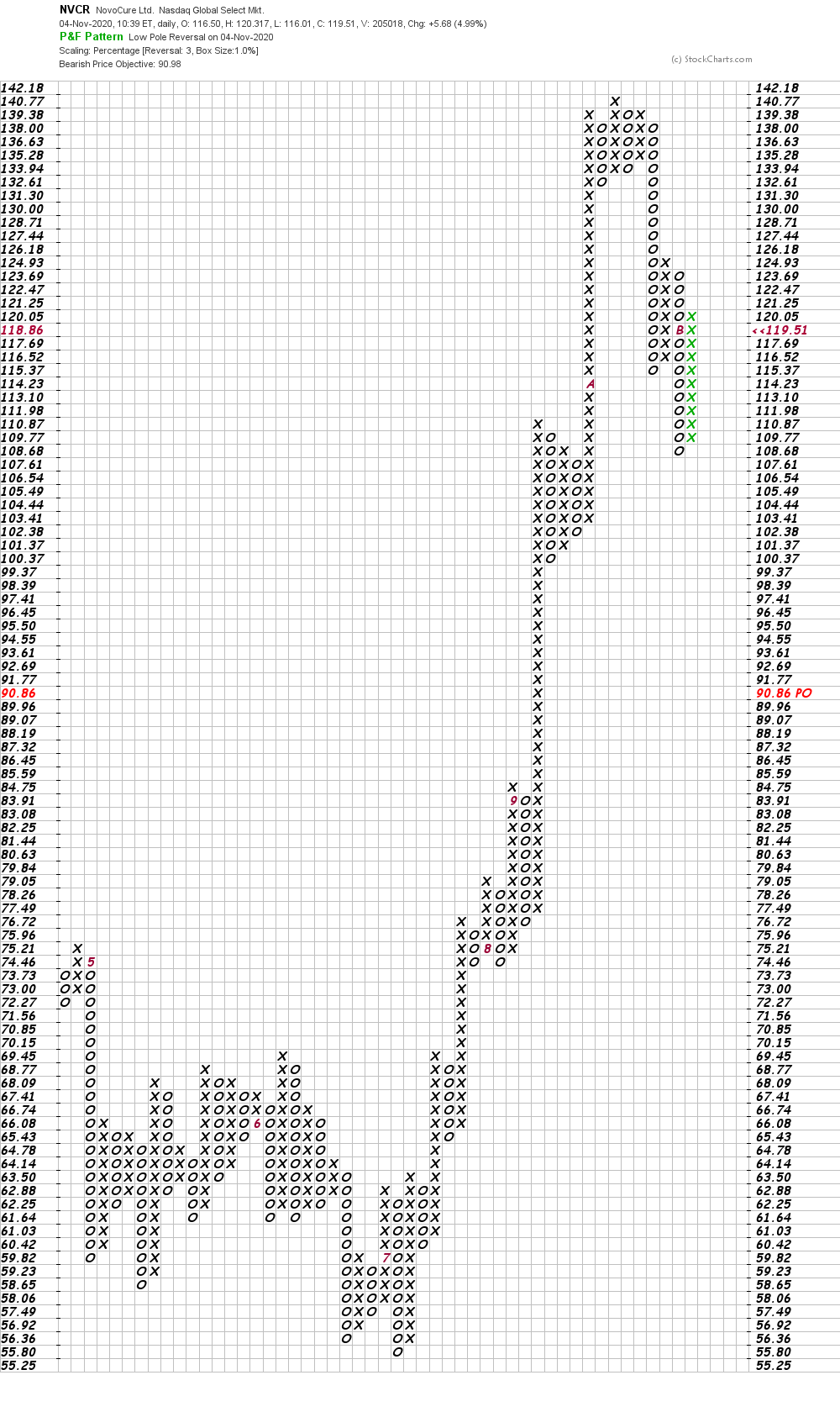 Bottom-line strategy: If you are still long NVCR from early October then I would continue to hold those positions but raise stop protection to a close below $110 now.
Get an email alert each time I write an article for Real Money. Click the "+Follow" next to my byline to this article.
TAGS: Investing | Stocks | Technical Analysis | Health Care Equipment & Services | Mad Money