By BRUCE KAMICH Aug 28, 2019 | 08:05 AM EDT
Stocks quotes in this article: OKTA
Okta Inc. ( OKTA) is the Stock of the Day at Real Money Wednesday. The cloud-based cybersecurity name is up 112% in 2019 and reports earnings after the close Wednesday night.
Let's see how the charts look ahead of that fundamental report.
In the daily bar chart of OKTA, below, we can see that prices have more than doubled in the past 12 months. The 50-day simple moving average line turned up in early January and helped define the uptrend this year. The line was tested in March and OKTA is undergoing a more serious test of the average line this month.
Trading volume looks like it has increased on each "step" higher on the chart telling us that more investors validated the bullish story. The On-Balance-Volume (OBV) line shows a nice rise to July and since it has been flat.
In the lower panel is the 12-day price momentum study, which shows a bearish divergence. Momentum makes lower highs from June to July to August when prices made higher highs in June and July. This divergence tells us the rally was slowing and it can sometimes foreshadow a correction.

In the weekly bar chart of OKTA, below, we can see that prices are up nearly five-fold from early 2017. Prices are above the rising 40-week moving average line and it looks like prices are at their widest to average line -- or that prices are extended.
The weekly OBV line confirms the price strength but the bearish crossover on the Moving Average Convergence Divergence (MACD) oscillator is a concern.

In this Point and Figure chart of OKTA, below, we can see that the software is projecting a downside price target around $124. A decline to $124, should it happen, will actually weaken the chart further and could open the way to a deeper decline. 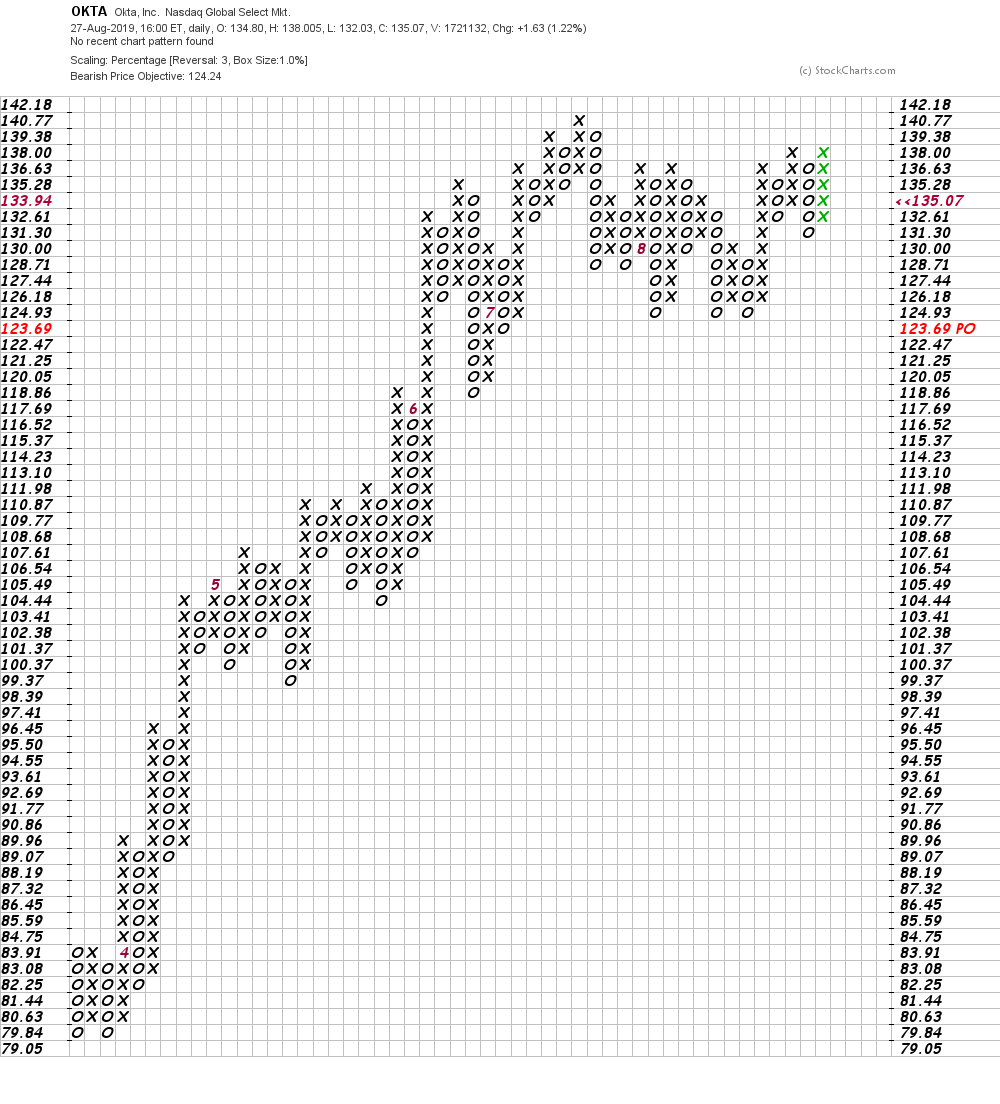 Bottom-line strategy: Feeling uncomfortable with your long position in OKTA? Want to sell down to a sleeping position ahead of earnings? That sounds like a good idea after reviewing the charts.
Get an email alert each time I write an article for Real Money. Click the "+Follow" next to my byline to this article.
TAGS: Investing | Stocks | Technical Analysis | Software & Services | Technology | Stock of the Day | Earnings Preview