With the shares off $70 from their highs, Cramer considered Costco a buy.

But for the home gamer buying on margin or the hedge fund manager needing to raise cash to cover redemptions, Costco isn't a company with great fundamentals and a low share price, it's merely a source of funds. These shareholders can't be counted on to respond to great earnings, Cramer said, which makes investing a lot more difficult than it used to be.

When we last looked at COST way back on Dec. 7 we wrote that, "With COST reaching a Point and Figure price target and upside price momentum slowing the odds increase that prices could turn sideways or even turn lower. Longs should take some profits ahead of earnings and raise stop protection on the balance of their longs to $361." Well, prices continued lower and by late December our $361 stop would have been elected.

How do the COST charts look now?

The On-Balance-Volume (OBV) line has declined significantly from the beginning of December and tells me that sellers have been very aggressive the past three months. The Moving Average Convergence Divergence (MACD) oscillator turned bearish in the middle of December.

In this weekly bar chart of COST, below, we can see a bearish setup. Prices are below the cresting 40-week moving average line and appear to be the weakness performance in the past three years.

The weekly OBV line has been on the defensive since October. The MACD oscillator crossed to the downside in the beginning of December and is getting close to a close of the zero line.

In this daily Point and Figure chart of COST, below, we can see a potential downside price target in the $234 area. This would mean that a significant support area or zone from April to June is broken. 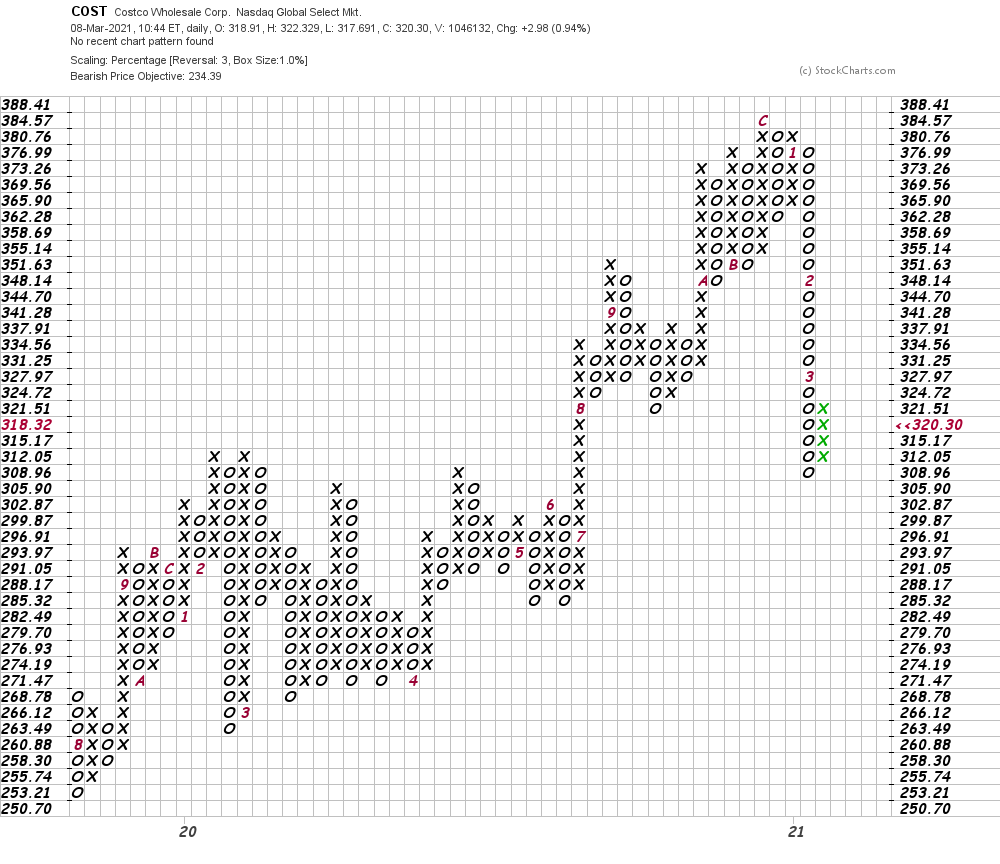 Bottom-line strategy: Yes, COST has made a pretty big decline in the past three months so a bounce is certainly possible, but our favorite indicators are still bearish. Avoid the long side for now but you could put COST on your shopping list for the second quarter.

(Costco is a holding in Jim Cramer's Action Alerts PLUS member club. Want to be alerted before Jim Cramer buys or sells COST? Learn more now.)