I can't tell you that the markets are right. In fact , the marketplace often enough throws head fakes here and there. I will tell you this, however: When tech leads the way, that's never a bad thing. Now, not all tech is created equal. When the semis lead tech... well, that's a growth story. Unless it's a consolidation story. A growth story? As the Atlanta Fed sees its GDPNow modeling for the first quarter drop to 0.2%. Survey says... XXXX. You see, even though those Retail Sales numbers that look sort of okay, as they indeed stabilized, the fact is that both November and December data were revised substantially lower.

That makes your 0.2% month-over-month growth in retail sales that much more pedestrian in nature. It also mean that a downward revision is likely in store for Q4 GDP, making that 2.6% seasonally adjusted, annualized number probably too high. What this does is cement the Fed in place.

So, we're kind of crossed between deals that will hopefully lead to growth, and current conditions that will lead to the reintroduction of our old friend TINA. There Is No Alternative.

The Fed Funds Rate currently stands at 2.5%. If one looks toward December... a glance at the futures market trading in Chicago, probabilities according to what is currently priced in, are for a 0% chance of a single short-term rate hike by year's end. There is, by the way, roughly a 12% chance of one rate cut, and a minute chance of two rate cuts.

Back to the semis. With prospects for better growth not yet a reality, and many of your favorite chip makers still several months away from normal inventory levels (a problem exacerbated by stalled growth), then why did the semis lead? It's not earnings expectations. Consolidation. Nvidia (NVDA) outbids Intel (INTC) for Mellanox Technologies  (MLNX) . That's kind of a big deal. Oh, the 200-day SMA also factored in. Take a look at this trampoline like action. The algorithms that control the point of sale surely did.

With a better Brexit deal perhaps in the offing, the dollar could finally catch a break today. The pound and the euro are both stronger against the greenback. The only reason that the FOMC could possibly have at this point in time to raise rates would be to combat consumer level inflation.

We will get February data on that front this morning. If that CPI release shows something along the lines of another headline print of 1.6%, then it may be game on, even with 2.2% inflation at the core. Long day ahead.

Apple (AAPL) ran almost 3.5% on Monday, beating the markets and beating tech. The catalyst? An upgrade. The point? Not just any upgrade, but an upgrade by Bank of America Merrill Lynch analyst Wamsi Mohan. Mohan downgraded Apple way back on November 2, after the firm had released fiscal Q4 earnings results the day before. Apple investors remember last November 1 very well. The firm beat expectations but guided below going forward.

A bevy of analysts weighed in negatively over the course of the days that followed. As I remember it though, Mohan was first out of the box. Mohan cites no new news, news would come much later on Monday. The feeling over at Bank of America is that there will be an improved environment for profitability later this year, as the firm's relationship with China normalizes. A trade deal would be nice. The focus will move back to the growth in the services side of the business and the potential there for recurring revenue streams. By the way, Bank of America also raised its target price from $180 to $210.

My thought just from listening to CEO Tim Cook is that the future for this firm may lie in the healthcare arena, where it is currently making its presence felt, and tying that software business to the hardware wearable line of products, namely, but not limited to, the Apple Watch.

The big day comes on March 25. It's a Monday. I've already looked. Cupertino, California. The next big Apple event. There are expectations that this is when Apple will announce the launch of its video streaming service that will eventually compete with the likes of Netflix (NFLX) , and Walt Disney (DIS) . The industry view is that there will actually be two such services, a free service as well as premium version that will offer programming now offered at Starz and Showtime.

On top of that, expect to hear something about Apple News, a service that will include bundled subscriptions to media outlets. Is this the next big thing? I would think Apple has the muscle, not to mention the cash, to make it so. I am here for the long haul. 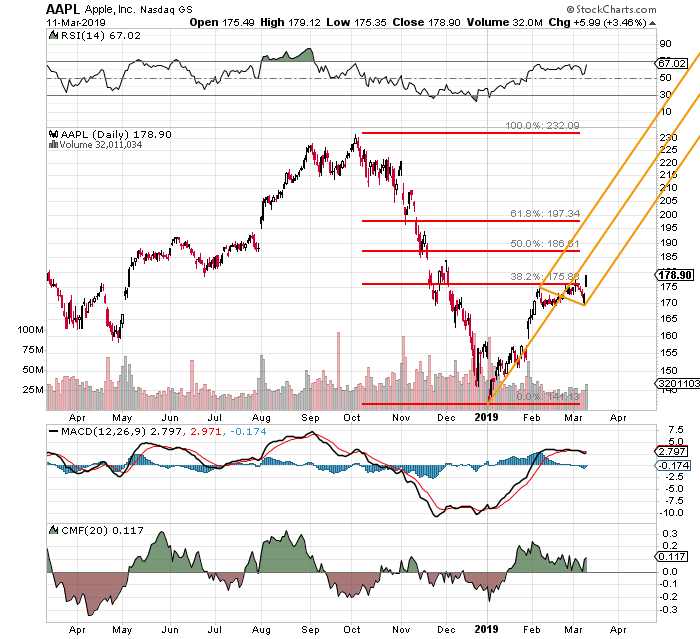 Yes, there is a chance that the stock is now at the apex of the second shoulder in a big, sloppy "head-and-shoulders" formation. That would not be bullish. Our favorite 12th century Italian mathematician (Whose name was really Bigollo) might see it differently, however. What I want you to see here is the resistance that AAPL ran into at the 39.2% retracement level of the late-2018 melt-down. It would appear that after a sideways fight that lasted about a month, AAPL has broken through. I would prefer to see a test of that level from the upside as confirmation of the spot, but I'm sure that does not really matter to a lot of folks.

I think a base of support has now been built in the $168 area regardless, and that brings us to our Pitchfork, which was only really made possible by the time spent building that base. Money Flow is on the side of the bulls. Relative Strength is in a good spot, without stretching into territory conventionally thought of as an "overbought" condition.

Notes: The sale of these options reduces net basis for the equity trade to $173.46. The firm is likely to pay out a $0.73 quarterly dividend around that time. You'll have to hang onto the equity if that interests you. Worst case, the trader gets hit in the mush and ends up wearing 200 shares at a net basis of $171.73 (less expected dividends).