Long story short. In 1979, Willie Mays was a new Hall of Famer, working as a hitting instructor with the New York Mets. Mays signed a contract to work part-time doing meet and greets and appearing at charity events on behalf of Bally's Park Place hotel and casino in Atlantic City. He was not gambling, nor was he really part of the business of gambling. Major League Baseball Commissioner Bowie Kuhn banned Mays from baseball for the mere association with such a business.

Four year later -- 1983. Hall of Famer Mickey Mantle takes a job appearing at golf outings and charity events working for Del Claridge hotel and casino in Atlantic City. Similar job to the one taken by Mays. Same result. Mantle is banned from baseball by Bowie Kuhn. Two of baseball's most beloved players of all-time banned for merely trying to capitalize on their sports-related fame by working for casinos away from the casinos themselves.

October 1984. Peter Ueberroth, fresh off of successfully running the 1984 Summer Olympiad in Los Angeles, is hired as Major League Baseball's new commissioner. By March of 1985, both Mays and Mantle are reinstated, and permitted to work in, and be around baseball.

Thirty-four year later, in May of 2018, the United States Supreme Court would strike down a law prohibiting sports gambling in almost every U.S. state. By November, current MLB commissioner Rob Manfred would name MGM Resorts (MGM) the "Official Gaming Partner of Major League Baseball." The times, they sure have changed.

On Wednesday, DraftKings (DKNG) announces the addition of NBA Hall of Famer Michael Jordan to the company as a special advisor to the board of directors in exchange for an equity stake in the company. DraftKings, for the newly initiated, is a sports betting and fantasy sports company. This is what they do. According to reports, Jordan, who is known to enjoy a game of Blackjack as well as gamble a bit on the golf course, will advise the board across a number of areas including corporate strategy, product development, diversity, equity and marketing.

In case anyone thought an issue with the NBA might arise that could be similar to what happened to Willie Mays and Mickey Mantle decades ago, I have told you. Times have changed. Taken from the article at ESPN, "NBA team investors (Jordan is invested in the Charlotte franchise), including governors, are permitted to have involvement with sports betting and fantasy sports businesses, subject to safeguards required under league rules to prevent actual or perceived conflicts of interest." By the way, also revealed in the ESPN piece is the fact that The Walt Disney Company (DIS) , parent of ESPN, is invested in DraftKings.

Thursday morning. Back to baseball. The Chicago Cubs announce plans to work with DraftKings in a multi-year partnership to create what would be the nation's largest individual sports book right at Wrigley Field. We have gone from banning former players for shaking hands and smiling for pictures to inviting sports gambling right into the venues that house the events themselves. My, how times have changed. Realistically, with the pandemic still an issue, the Cubs are targeting late 2022 for a potential launch date. How far away can the other teams be? Across all leagues?

Remember, the firm has only been public since April, after merging with Diamond Eagle Acquisition Corporation, which was a SPAC and gaming technology provider SB Tech. There was no traditional IPO. On April 24, DraftKings traded at the lows of the day, with a $17 handle. Those prices were never seen again. The entire company is now worth more than $14 billion. That said, it still loses money.

For the second quarter, which was reported in mid-August, the firm posted EPS of -$0.55, a severe miss on revenue of $70.93 million. The revenue number was indeed a beat, and good for year-over-year growth of 26.3%.

The firm acknowledged a tough environment with all of the professional sports leagues at one point completely shut down. The firm also showed sequential improvement as the leagues all came back, albeit in limited ways. For the full year, DraftKings guides toward pro-forma revenue of $500 million to $540 million, or growth of 22% to 37% for H2 2020.

One would think the realization of both the NFL and major college football in successfully completing what they start is crucial to meeting these numbers. The Division One college football season for those teams that are participating will open this weekend. The National Football League "kicks off" a week from today. 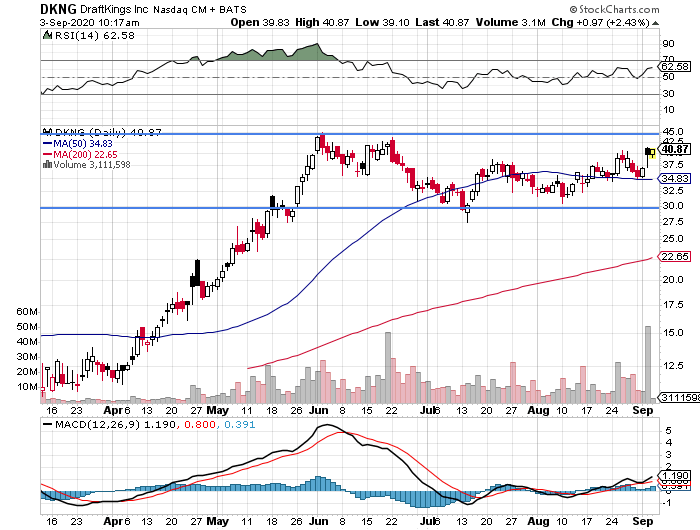 Clearly the stock rallied from its April lows and then stabilized into a long basing pattern from June through to the present, as the sports leagues have reopened, but television ratings for the most part and for the NBA in particular have been well below expectations. If no one watches, will they still bet? In many cases, yes.

My opinion is that the name is speculative. Q3 expectations are still calling for negative earnings. When will the folks really come back to sports? Probably when sports once again become not only a game, but an event. A chance to socialize, to get excited about something... together. That means fans in the seats, or in the bars. Until that happens, I don't think this name can excel. Then again, the CDC is telling the states to be ready, and be ready soon, for a vaccine. The year 2021 will almost certainly be better for DraftKings than has been 2020.

How to Make a Bet on DKNG

I would not go nuts, but I could see accumulating shares in small-sized lots over time on down days. Maybe an initiation at or close to the 50-day SMA, which is currently just below $35. For those interested, January 2021 $35 puts trade thinly, but the last sale is an even $6. Write those puts? Certainly an idea. How's a net basis of $29 sound? Either that or $6 in the pocket if the shares never sell off that far.

Get an email alert each time I write an article for Real Money. Click the "+Follow" next to my byline to this article.
TAGS: Investing | Stocks | Digital Entertainment | Sports business | Gaming | Sports