The question of the day on Thursday -- at least in the morning -- was shouldn't we be bearish now that the McClellan Summation Index has turned down, and it has done so from a lower high?

It's a very valid question, but let me explain something about the indicator.

Should we see the S&P rally and the Summation stay heading down for a few weeks, that would be a divergence and concerning, and ultimately bearish.

If you want to be bearish about something, focus on the number of stocks making new lows. Nasdaq went to triple digits on Thursday. And once again, there were more new lows than new highs.

The New York Stock Exchange nearly joined Nasdaq in the triple-digit category, as it saw 94 new lows. That's the most new lows it's seen since the late May/early June low, and the S&P is 10% higher. So this is concerning. What is so curious, though, is this rarely happens when breadth is still relatively OK. Typically we see this when breadth and the Summation Index are heading down already. So we'll watch breadth and the various breadth indicators to see if they start to show a divergence vs. the major indexes.

The American Association of Individual Investors (AAII) saw the bulls in their weekly survey scoot up to 36%, which is pretty much neutral. However, Bob Farrell, a now retired but much revered technical analyst from Merrill Lynch, created an indicator using all the various inputs to the AAII survey that has been quite good over the years. It is wildly bullish now, in that it has dropped to a reading lower than it was at the December low. 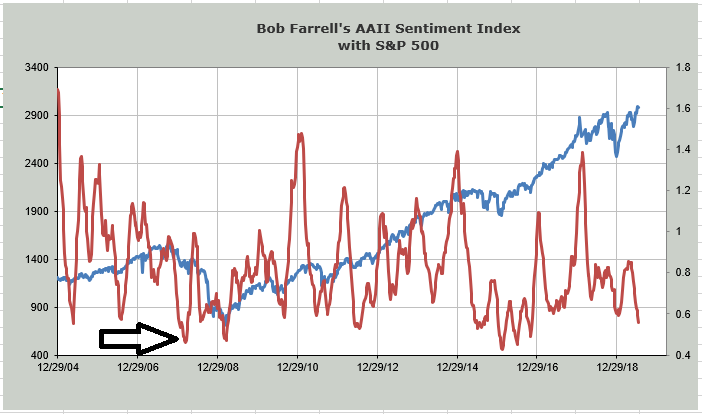 The arrow on the chart shows the only other time getting into this area wasn't so bullish. That was March 2008, which actually did give us a decent rally off the Bear Stearns low, but that rally ultimately failed as we know. I also don't see other times we were at new highs and the indicator was this low, so color me confused by this. But I thought you should know.

I will end by noting that the Daily Sentiment Index (DSI) for Gold and Silver are now at 91, so they are likely due for a pullback next week, especially if they notch a higher reading on Friday.