Just shy of two months ago, in late May, when the market took off to the upside, breadth was terrific. In fact, it was so good I heard many call it a new bull market. You see, they said that new bull markets always started that way, with widespread breadth and value stocks leading. There were all sorts of comparisons to 2009 and 1982, even.

Now we hear that tech is good. Tech is where it is at and that's what matters. Well, how can it be that good breadth was good (it is) but poor breadth is good, too (it isn't)?

Even up until a few weeks ago, Nasdaq's McClellan Summation Index (using volume) was rising consistently, but that too has rolled over.

Up until about a few weeks ago the number of stocks making new lows on Nasdaq was single digits. Now we saw 35 on Thursday, a day Nasdaq made a new high. Now 35 isn't awful, but it is the most we've seen in two months. What's more the 10-day moving average is rising.

The way I see it the market has three choices. The first is that these down-and-out stocks lift themselves up off the mat and join the party. The second is that Nasdaq and those beloved tech stocks come down, taking the indexes down with them. The third option is that these divergences continue.

Option one would make for a healthier and more bullish market. Option two isn't so terrible, either, because if you can get a good whack in the market and you can get to an oversold condition, you can turn sentiment from this complacent mood it is in, and reset it -- because we can be rest assured if tech gets hit, sentiment will sour. The third option, however, at least to me, is bearish.

The market can continue with this divergence a very long time. Remember, in the late 1990s it lasted about 18-24 months, depending on how you count it? But what we know is that when such divergences get so extreme, it doesn't bode well for the market on a longer-term basis.

Take a look at this chart of the Russell relative to Nasdaq dating back more than 20 years. It is not yet as extreme as it was in the first quarter of 2000, but I think we can all agree that we haven't seen a divergence like this since then and we can see how that turned out. 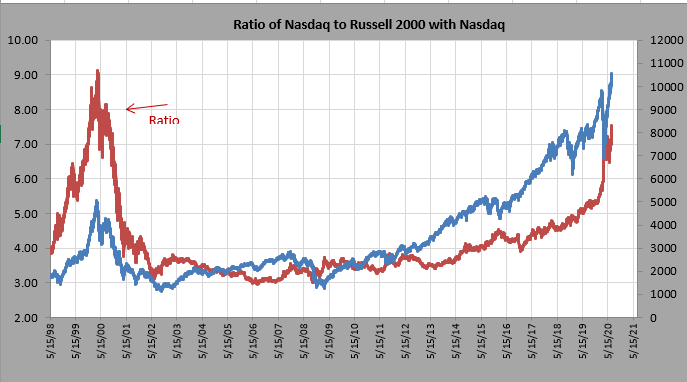 I will end by noting that the DSI for Nasdaq ended the day at 91, so, once again, I'd be looking for a little downside to correct that very short-term sentiment reading.