Akamai Technologies Inc. (AKAM) came up during the Lightning Round of Monday night's Mad Money program on CNBC. Jim Cramer said, "I think that's a great situation and I'm a buyer." Jim knows a lot about a lot of companies, but I take a shortcut and just look at the charts and indicators. Let's check.

In this daily bar chart of AKAM, below, we can see that prices declined from June to early January. Since the beginning of the year the situation has changed. From August to the end of January, the 50-day moving average line had a negative trend, but now the slope is positive. On Monday, AKAM close above the bottoming 200-day moving average line.

The On-Balance-Volume (OBV) line shows an interesting pattern in the past year -- from June to January, the OBV line basically moved sideways while prices declined significantly. To me, this means that sellers of AKAM were not that aggressive during the decline. Recently the OBV line made a new high and suggests that prices should come on strong, too. The Moving Average Convergence Divergence (MACD) oscillator crossed above the zero line in early March, but quickly crossed to the downside and a take-profits signal.

In this weekly bar chart of AKAM, below, we can see a mixed picture with our favorite indicators. Prices are just edging above the still-declining 40-week moving average line. The weekly OBV line is off its best levels, but it only declined slightly from August to December -- so not a lot of aggressive selling, but not a lot of buying, either. The trend-following Moving Average Convergence Divergence (MACD) oscillator crossed to the upside in early February for a cover-shorts buy signal. This indicator is now close to the zero line -- a possible outright buy signal.

In this Point and Figure chart of AKAM, below, we ignore volume. Here the chart shows a potential upside price target of $88. A decline to $68.09 would weaken this chart. 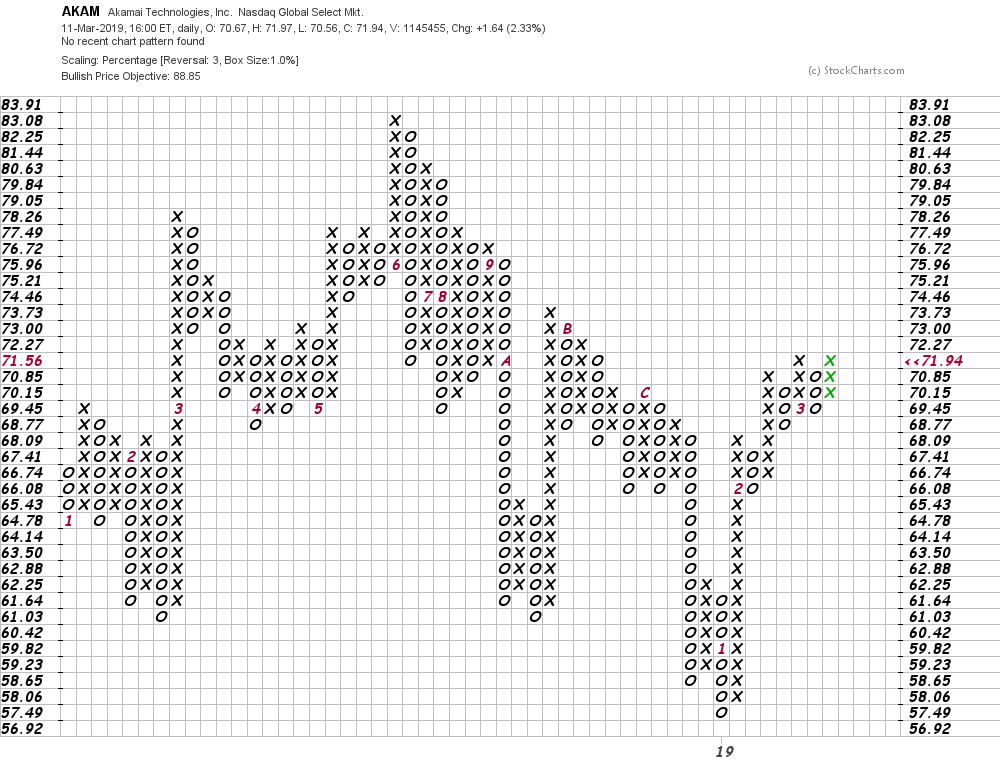 Bottom line strategy: AKAM needs to close above its November high to push the bulls. Aggressive traders could go long AKAM above $74, risking below $68 and looking for $88 on the upside.

Get an email alert each time I write an article for Real Money. Click the "+Follow" next to my byline to this article.
TAGS: Investing | Technical Analysis | Technology | Mad Money | Stocks