It came late in the season. The year's top-performing stock of the year would report second-quarter financial performance. Expectations would be high.

Nvidia (NVDA) is the elite of its industry. Artificial intelligence. Machine learning. Graphics. All leading to dominant positions in the data center (the cloud), and in gaming. Oh, there are other lines of business. They are smaller, or in relative terms speculative, however. Investors watch Professional Visualization and/or Automotive, but the firm can beat or miss in those spots, and maybe it does not leave a dent.

The big two business segments are what counts most from this name. They could not, and they did not disappoint.

In Tuesday's Market Recon column, we suggested taking a bit off of long positions ahead of the digits. The stock traded just shy of $500 that morning. Hope some readers took heed. The intent is to add the shares back to the position after extracting some capital.

I see NVDA shares trading around a $480 handle early Thursday morning. I am not sure that I trust the stock to come in much further. Sure, there is some talk that Nvidia may try to acquire ARM Holdings from Softbank. That will cost some dough, which Nvidia certainly has access to, but would likely at least at first pressure the share price. Then again, Nvidia will host a "GeForce" special event on September 1. Hard to imagine that nothing positive comes out of that.

I would think even if a little timid, grab at least a few of those shares back on this discount, even at valuations at 62 times next 12 months earnings. This name does not trade on traditional metrics like that. It trades on flow.

For its fiscal second quarter, Nvidia reported adjusted earnings of $2.18 per share, a beat of more than $0.20, and good enough for year-over-year growth of 76%. Revenue grew an even 50% to $3.87 billion, also ahead of expectations.

Top dog this quarter for Nvidia was the Data Center. That business line contributed $1.75 billion to the whole, ahead of consensus and becoming the firm's largest business in the process. Gaming crushed consensus, landing at $1.65 billion. Adjusted gross margin in its entirety also beat the Street consensus, at 66%. Wall Street was looking for 64.5%, but the 66% mark did meet Nvidia's own guidance.

The interesting bit of information released here is the new guidance. It is apparent that Nvidia does not believe that the tremendous performance across its two dominant business lines had been organic and had not been pulled forward in terms of demand due to the pandemic. As for the Data Center, this is somewhat out of line with comments made by competitors suggesting a second-half slowdown due to reduced business expenditures by clientele.

For the third quarter, Nvidia expects to be able to post revenues of $4.4 billion, give or take 2%. Wall Street consensus is currently just below $4 billion for this number. Gaming, going into the holiday season, with many folks still stuck inside as the weather gets colder, is expected to grow 25% quarter over quarter. Growth in the Data Center is expected to grow more slowly, in the low-to mid-single digits.

Basically.the quarter reported and the quarter now expected are both terrific, in my opinion. 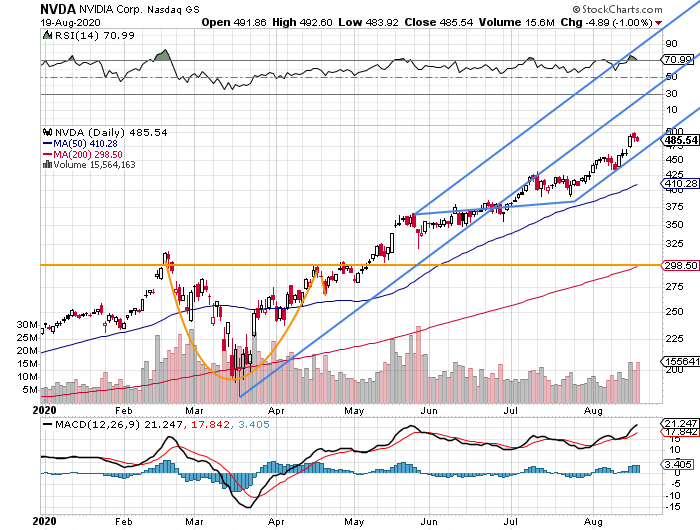 Is Nvidia extended from the May breakout? You bet.

Is the Pitchfork, in place since the March bottom, angled in such a way as to be unsustainable? Probably.

That said, I was hoping to see levels around $450 today. I will start adding back the shares sold earlier right after this article hits publication. Then I will wait to see if my instincts were correct.

If all goes well, I will double my current position down to $410. Getting that opportunity would indeed surprise me.

Get an email alert each time I write an article for Real Money. Click the "+Follow" next to my byline to this article.
TAGS: Earnings | Investing | Markets | Stocks | Trading | Semiconductors & Semiconductor Equipment