The stock has flat-lined, really since February. The name, Palantir Technologies (PLTR) has been a Sarge fave for nearly that long. It's a name that I have added to on nearly every dip, and only occasionally taking profits at peaks. It's not that hard to make some side dough on the churn when a stock trades (except for one really deep dip in May) in a precise $7 range for half a year. I am a trader, but for this name I am also an investor. PLTR is in the top third of my entire book in terms of weighting. Why? Because nothing in warfare, business or life matters more than intelligence... and intelligence is what Palantir does, big data style.

Palantir reported the firm's second-quarter numbers on Thursday morning. Yes, the ball is still moving in the right direction. For the three-month period, Palantir posted adjusted EPS of $0.04, which beat Q2 2020 by $0.03, and beat the Street by a penny. Revenue generation increased 49.1% to $375.64 million. That was also a beat.

Oh, and by the way, this was the seventh consecutive quarter of 40%+ revenue growth. For me, that is what differentiates a "growth" stock from the pack.

The balance sheet is in pristine condition. Not only do current assets dwarf current liabilities and total assets dwarf total liabilities less shareholder equity, but get this: The firm's cash position (cash and equivalents, less restricted cash) more than doubles total liabilities. The largest single entry for any long-term liability is in operating leases. Non-current debt has dropped to zero over six months.

For the current quarter, Palantir expects to see $385 million in revenue, and an adjusted operating margin of 22%. The Street is at a rough $377 million on this number. For the full year, the firm increased its outlook for adjusted free cash flow to $300 million plus from prior guidance of $150 million plus. Longer term, the firm reiterated prior guidance of annual revenue growth of at least 30% for 2021 through 2025.

The stock is not loved by Wall Street. I find only nine analysts covering this name, four "sells", three "holds", and just two "buys". Five star (at Tipranks) analyst Tyler Radke at Citigroup is the only one in the group that has opined anytime since May, doing so last week. Radke has a "sell" on the name with a $17 price target.

I don't necessarily follow the rest of the Street, as I am relatively sure I am the only one responsible for providing my own paycheck. You know what I see? I see a firm that provides data analytical services to the Department of Defense, the FDA and the various federal intelligence services. I see a firm that, in June, the CDC renewed a $7.4 million contract to monitor routine diseases and future outbreaks.

I see a firm that in July, the U.S. Department of Health and Human Services renewed a deal to use Palantir to track vaccine production, distribution and administration. I sometimes come very close to moving this name out of my software portfolio and into my defense contractors group. They don't build missiles, but what they do is crucial to both national security and national success. 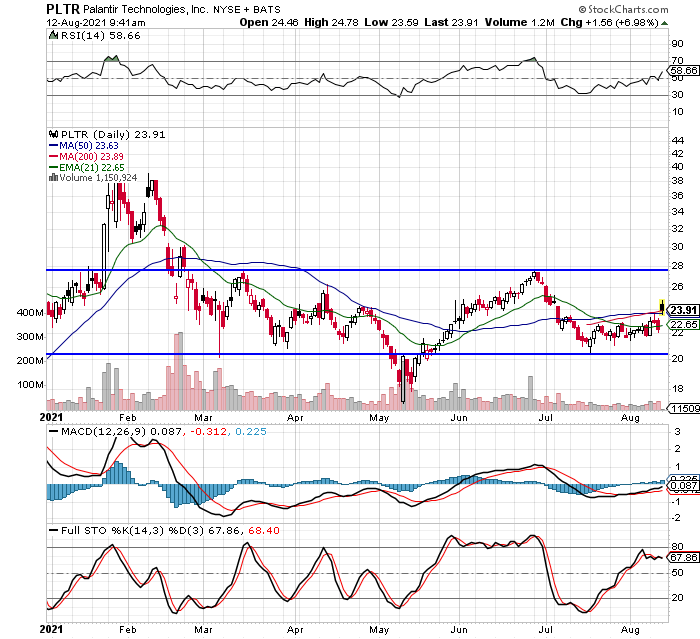 Readers will see the long basing pattern in place since February. The shares are up today, but not overbought. It's hard to see, but all three of our significant moving averages are running together. I am not sure there can be any take away, as the 21-day EMA pulls away from the 50-day SMA -- and that line, in turn, pulls away from the 200-day SMA. These will be positive technical signals, but I don't want to lean on them for much. As far as I am concerned, traders can buy this name at $20 and sell it at $27 until it proves that we cannot. Longer term, $27 is the pivot.

Get an email alert each time I write an article for Real Money. Click the "+Follow" next to my byline to this article.
TAGS: Fundamental Analysis | Investing | Stocks | Technical Analysis | Defense | Technology | U.S. Equity