But there is something else. Last Friday I said I wouldn't mind a down day to give stocks a bit of a rest. The big-cap indexes didn't care what I wanted, but breadth did. Breadth gave us two rather mild days of red and on Wednesday breadth came roaring back, with net breadth at +1,200, the best reading since last Thursday. And now it has made a new high.

It has also helped that the McClellan Summation Index to push higher. That indicator now needs a net differential of net negative 2,600 advancers minus decliners on the New York Stock Exchange to halt the rise, which means it is back into an overbought condition again. And we all know the longer we go without a down day, the more likely we are to get one. That is simply the way markets work.

Notice that Nasdaq had a down day on Wednesday. And yet breadth and net volume were both positive for Nasdaq. If you want to be bothered by something, then let it be the number of stocks making new highs, because that can't seem to expand properly. But the flip side is the NYSE saw the fewest stocks making new lows since mid July.

In the meantime would it shock you to know that the Investors Intelligence bulls ticked up a mere one point last week? It surprised the heck out of me to see the bulls at 43.2%. What surprised me even more was the bears ticked up to 23.9%, which means they are now a smidgen higher than they were at the lows in October 2020. I suspect we'll see a big shift next week for this survey, but I said I thought they would shift this week and they didn't. 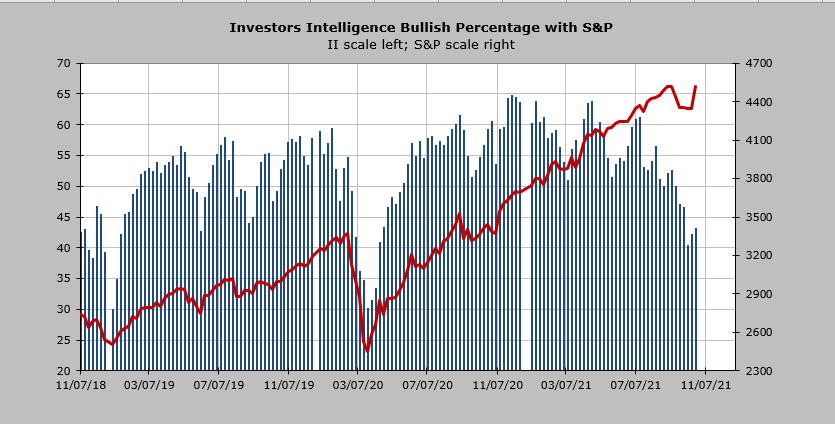 What has happened in terms of sentiment shift is that the put/call ratios have finally begun to move lower. The equity put/call ratio has been under .50 for six straight days. A reading under .40 would tell me we've stepped a toe into giddy with this metric.

I want to finish by addressing the rally in the utilities. As you may recall, I warmed up to this group a couple of weeks ago and it has had a nice run -- up 5%. I cannot say why the utes have run, while interest rates are rising. Nor can I say for sure that the potential for a giant head-and-shoulders top in the chart doesn't nag at me. But for the time being I think they will make a try for that resistance around 930.

I will leave you with one other chart to watch: The yield on the 10 Year Note. Yes, I see the potential head- and-shoulders bottom, but that blue line has been resistance for two years. And who isn't convinced rates are going higher?

Finally, I did an interview with TD Ameritrade on Wednesday if you would like to watch it, here's the link.

Splunk Has Gone Kerplunk Ahead of Earnings

Let's check out the charts and indicators before Wednesday's quarterly report.

Satya Nadella's decision to sell almost half his stake in Mr. Softee prompts a closer technical look at what may lie ahead for the tech giant's shares.